When Joe and Ryan threw some options on the table to write for Tough Pigs, I jumped at the chance to review Doodling with Jim Henson. Primarily because the opportunity came with a free copy of the book. I’m a professional graphic designer and illustrator with over twelve years experience and thought I’d be able to give an artistic take on it. What I discovered was a major cover up within the walls of Walter Foster Publishing, Incorporated and The Jim Henson Company; but I’ll get to that later. 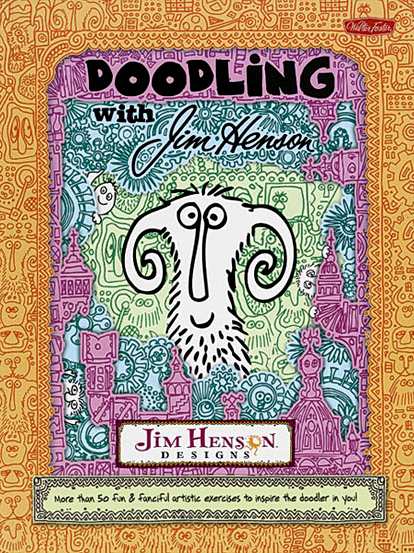 There are two types of people in the world: creative people, and everyone else who just hasn’t realized yet that they are creative people. Because we tend to only label artistic types as creative, it stands to reason some of us just need that push to think outside the box. Jim Henson would make the ideal spirit guide to unlock one’s creativity, and Doodling with Jim Henson sets out to be one of those keys to unlocking your creativity! Unfortunately, it fails to reach its full potential.

The book is a stunning looking piece, with shiny UV coating, full color pages, and lots of great pictures of Jim. Did I mention the book is about doodling with Jim Henson? Because the book is going to remind you of that more than Spider-Man reminds himself that with great power comes yada yada yada.

After a little introduction talking down to the reader about how to use this book, we’re given a crash course in Henson history. Jim was born in Mississippi, did stuff with puppets, went to Disney World and liked it, and then left the world a better place than when he was here. Now, I completely understand that this book may be the first book someone ever reads about Jim, and the history is thorough despite its brevity, but here is where we see padding out the pages done wrong. 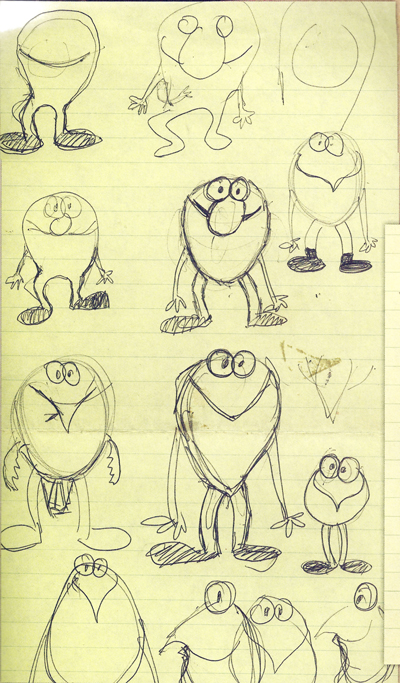 Like those little guys? If you’re an avid fan, you’ve probably seen (some of) them before in Jim Henson – The Works, or Jim Henson’s Doodle Dreams. They’re very fun looking characters that really illustrate how Jim could make very simple art fun and expressive. The problem is that they show this very same illustration three times within 14 pages, and they show up again later too! This sort of thing doesn’t necessarily happen a lot in this book, but it happens enough to notice it, and this is my biggest gripe. Jim had tons of sketches in his journal, on notes, napkins, and whatever else was available. He practically communicated through this art with his designers. So why isn’t there more diversity in here? Most likely due to the splintered ownership of everything, maybe there can’t be concept designs of the Muppets. I admit, I gobble up Jim’s art more than the average fan, but I’ve seen all this before! Okay, maybe not all of it, here’s some fun art I’ve never seen before! 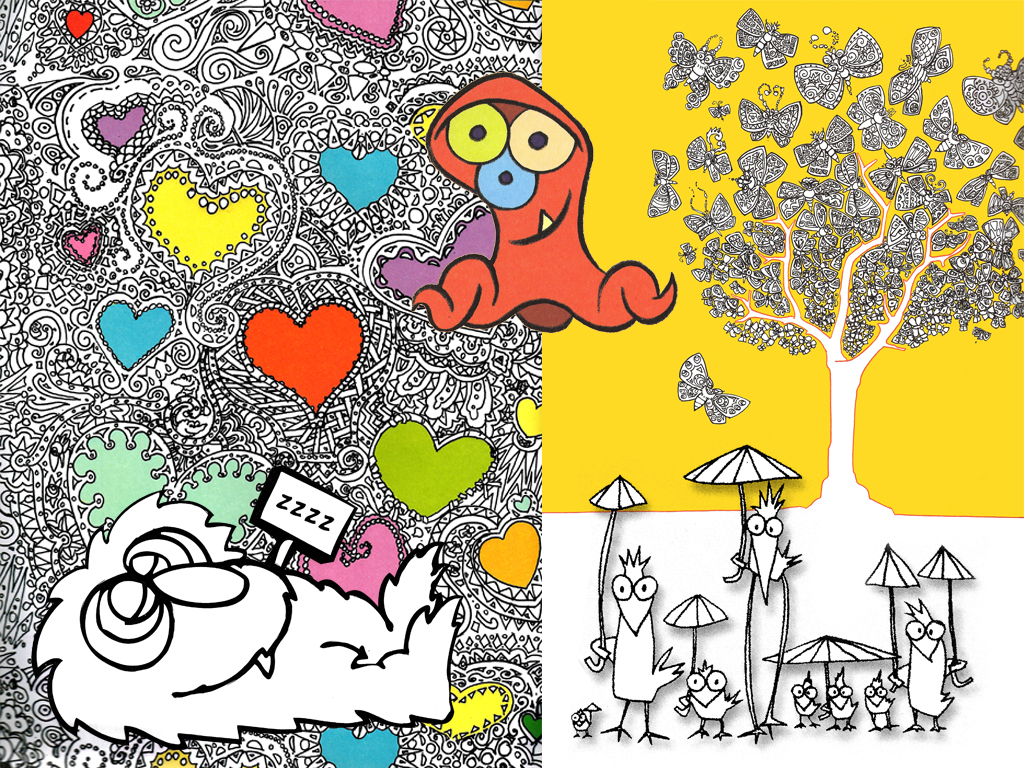 Ooh! It’s so beguiling and charming! I love all this exciting art I’ve never seen by Ji… wait a minute… I’ve never seen this art by Jim Henson before because it is in fact NOT by Jim Henson! That’s right, while most of the art that appears in the book is by Jim, there’s a significant amount done by artist Mel Horan who has an incredible talent mimicking Jim’s style. So while I am very impressed with, and love Mel’s fanciful illustrations, I’m not exactly doodling with Jim Henson anymore, am I?

(Editor’s note: We did a little digging on Mel Horan, and here’s what we came up with.  He’s the Art Director for the Jim Henson Company. You can see him being briefly interviewed in this promotional video for 2011’s Jim Henson Google Doodle.  And he made all the visual effects seen in this impressive/bizarre YouTube video.)

After our brief lesson on who Jim was and a very nice collection of his pictures and sketches (repetitiveness aside), we’re given our first exercise in creative doodling. Here we have the opportunity to learn how to draw (or outright reproduce, but who am I to judge?) one of Jim’s doodles, list what you dream about, and freestyle your own little dreamer. It’s from here on out where the book tries to encourage the reader to be creative. It doesn’t really ever let you soar off into the sky, but merely suggests you try and do what’s on the page. Granted, these are very good baby steps for someone who refuses to believe they’re not the creative type, but while the activities will expand from here later on, they still keep a tight leash on you. 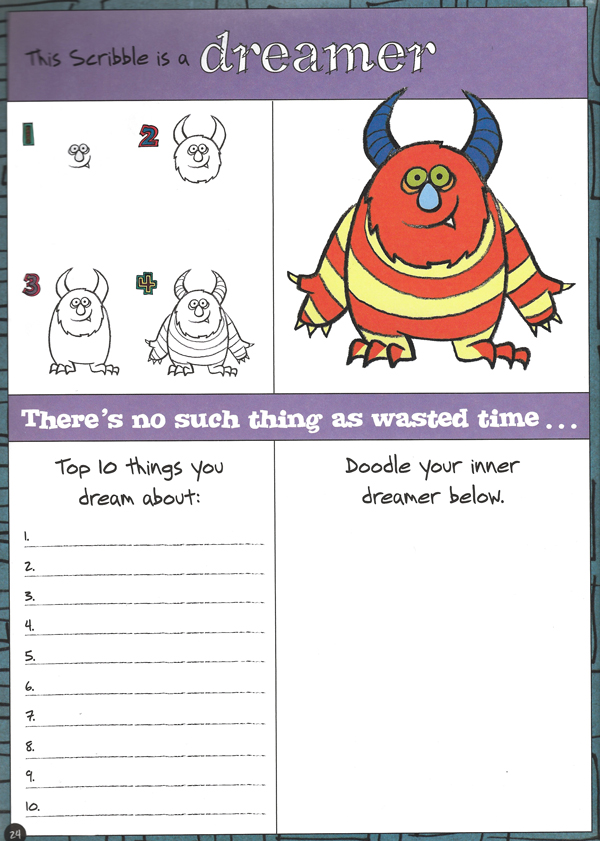 Once again, the more hardcore fan will recognize this little guy (and others in similar exercises down the line) as one of the Jim Henson Designs line of merchandise licensed by 4Kids Entertainment and later made into PVC figurines produced by MINDstyle and Toy Tokyo. I proudly own a few of these City Critters (as they’re called) in my Muppet collection. Here’s where things get downright mysterious though and really shake up my world. All these little City Critters (simply referred to as “Scribbles” in the book) are merely “inspired” by Jim Henson’s sketches. In fact, the credits in this book list all of them as having been drawn by Mel Horan. While I’ve Googled my brains out, strip searched the forums, and followed my finger through numerous news articles, I can’t find any of the original source material that these scribbles were based on. The Muppet Wiki recognizes Fearzog, but while I can guess on a few of the others, there’s no official word on their original creation.

Do you guys realize what this means? Conspiracy! They’ve frozen Jim’s brain and are storing it underground until they can fit it in a robot body! Okay, maybe not, but it seems to me, as Henson–like as these cool little guys are, they’re not actually Jim’s art. Hence, for a big chunk of Doodling with Jim Henson, we’re actually doodling with someone else. 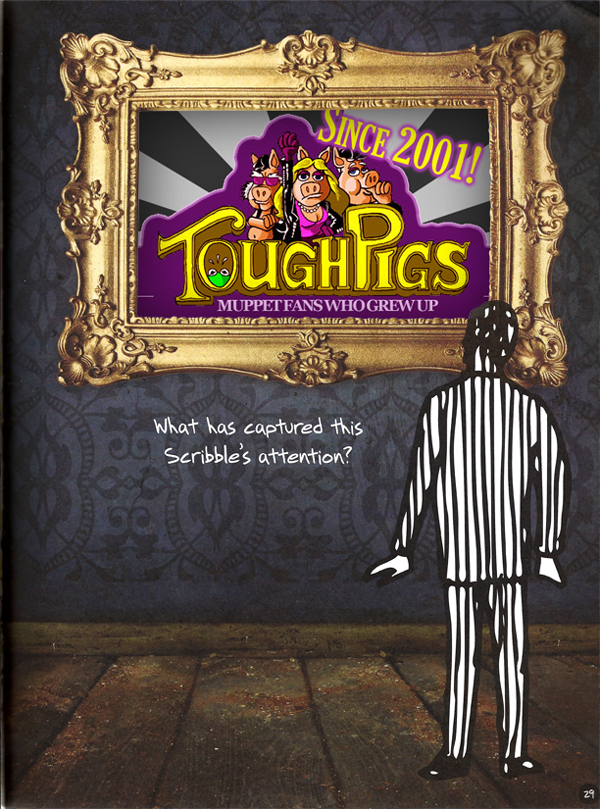 The rest of the book does its best to have the reader simply draw whatever they feel, providing random scenarios to sketch in: thought balloons, the side of a building, amongst other doodles, the cover of a book, within a picture frame—literally not allowing them to think outside the box. Other times it asks the reader to conjure up what a character is dreaming of, or requests they scribble when feeling a certain way like hungry or sad. It also tries to offer quirky ways to draw, like using your feet or non dominant hand. It advocates would–be artists to think on their own, but often offers rather specific suggestions, never really letting go of their hand and allowing them to produce something original.

Other books like Wreck This Journal or The Dangerous Book for Boys provide outlandish and silly ways of doing things differently that can help anyone to be creative. They flat out instigate anarchistic behavior to help people discover ways of thinking they never considered. Now to be totally fair, doodling is the only activity the book actually claims to offer. It’s essentially a very elaborate sketch book, but it suggests to be so much more, and it really could have been.

The Indian mystic, guru, and spiritual teacher Osho explained that everyone can be creative, and said, “Creativity is the greatest rebellion in existence.” Rebellion, thinking differently, chaos… these are all blissfully delicious ways to explain true creativity as well as the mind of Jim Henson! As I mentioned before, he is the penultimate spirit guide to becoming more creative. So much so that I was inspired to do my own take on some of his sketches. After all, art is interpretive! 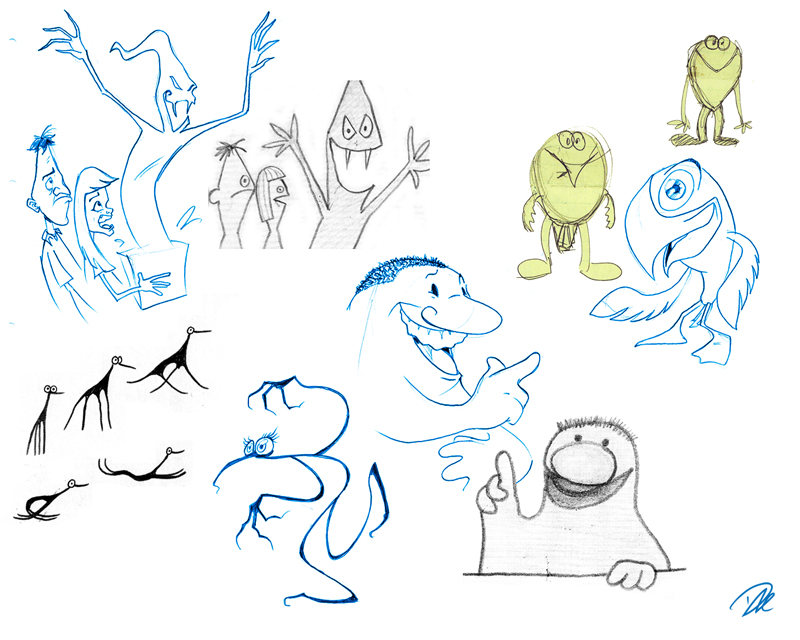 Jim’s art is profoundly simple and evokes a tremendous sense of movement. It was a bit difficult to expand on what he did without reproducing it at first. You know the book I wanna’ read? The one that shows how people like Don Sahlin and Michael Frith took one of Jim’s sketches and fleshed, er, foamed them out in to reality. Now that’s being creative!

So let me try again and give my take on some of these scribble characters. 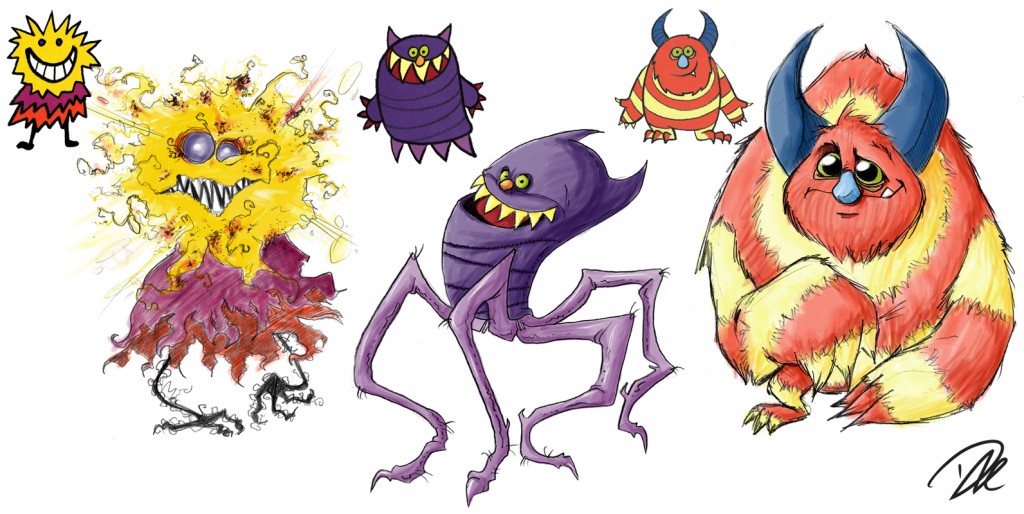 So what have we learned here? Very little, I’m a better artist than I am a writer. However, I was once fortunate enough to hear the President of the Jim Henson Legacy, Craig Shemin profoundly advise a young puppeteer, “If you want to be like Jim Henson, the best thing you can do is not be Jim Henson.” In other words, Jim never tried to be anyone other than himself. The best way to be creative is to simply listen to that inner voice that is all you! Allow your thinking to be chaotic and different. Jedi mind trick a paper towel to make you a grilled cheese sandwich, practice yodeling underwater, mold a statue out of bread then train birds at your local park to worship it instead of eat it, think differently! 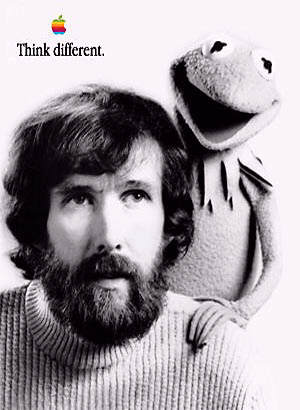 So if you’re a hardcore fan who has to own everything Jim Henson related, want a lovely looking book for your coffee table or shelf, or just want to stare dreamily at more photos of Jim; then by all means buy this book. If you’re looking for a much better collection of Jim’s art and insight into his process, then I highly recommend you get Karen Falk’s Imagination Illustrated. It is a superior book and enchantingly satisfying.

As for a really fun creative drawing exercise, try something that I’ve personally found very rewarding and innovative. Find some kids; preferably ones that are of your own brood or relation. If you can’t find any, in the most non–creepy way possible, ask to borrow some from a friend or neighbor. Have them draw a picture for you. It can be anything! Kids are a wellspring of inspiration and untamed imagination. Whether it’s a violent hurricane of Crayola madness or a nicely rendered garden in the classic medium of finger paints, take that mini masterpiece and reproduce it however you first see it. Maybe you can take turns in the artistic process. They draw something that vaguely resembles a dog, you throw in an honest attempt of a skateboard, then they add some rockets, etc.

My niece drew me a mind–blowing portrait of Fozzie, Kermit, and Miss Piggy. To date, it is one of my most favorite pieces of art I own. I was moved to illustrate my own interpretation to which she then told me, “That’s so cool! I really like it!… but mine’s better”. 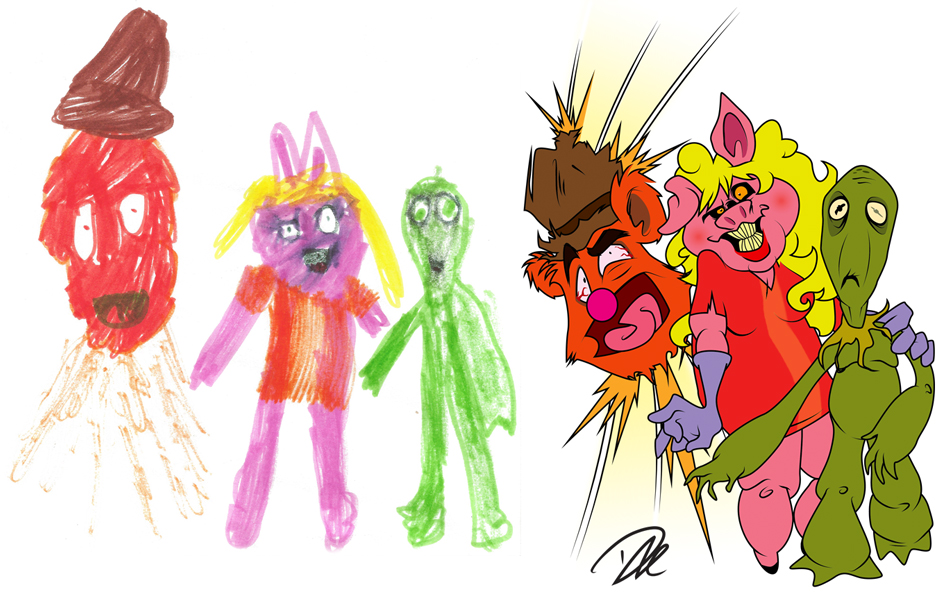 Everyone’s a critic, but I have to agree with her.

Click here to doodle with Mel on the ToughPigs forum!

Can You Tell Me How To Get The Complete History Of Sesame Street?