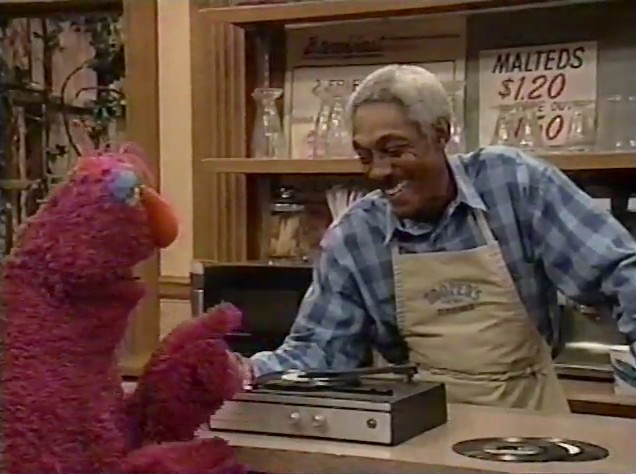 We have just learned that veteran actor David L. Smyrl has passed away at the age of 80.  You may recognize him from all those times he sold birdseed milkshakes at Hooper’s Store in his role as Mr. Handford on Sesame Street.

Smyrl performed as a coffehouse poet, Broadway actor, and sitcom writer (including two episodes of Benson) throughout his career.  He also had a recurring character on The Cosby Show in the mid-1980s, for which he also served as a gag writer and warm-up comedian for the live studio audience.

In 1990, Smryl replaced actor Leonard Jackson as Mr. Handford, the owner of Hooper’s Store on Sesame Street.  He continued to run the store through 1998 when ownership passed from him to Alan, who continues to own the store today.

If you want to revisit some memorable Mr. Handford videos, we recommend starting with this one, in which he serenades Maria’s aunt with a song:

Despite not being as prominent as Gordon or Maria or Bob, David Smyrl was a big part of a lot of our childhoods, and we’re proud to have called him our Sesame neighbor for so many years.  Thanks for the memories, Mr. Handford.

Click here to help us remember David Smyrl on the ToughPigs forum!