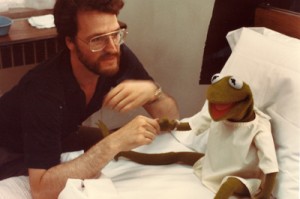 If you’re any kind of Muppet fan, you’re intimately familiar with The Muppets Take Manhattan. If you’re a true Muppet geek, you’ve also heard of Inner Tube, Jim Henson’s odd 1987 pilot for a high-tech variety show that eventually morphed into The Jim Henson Hour. (It never aired on TV, but if you look for it you might just be able to find it, like maybe on some kind of video website that also has the word “Tube” in its name.) One thing both of these projects have in common is writer David Misch, who was recruited to work on Manhattan and later scripted Tube. Recently, Misch (whose website can be found at davidmisch.com)answered a few questions for us regarding his work on both productions. 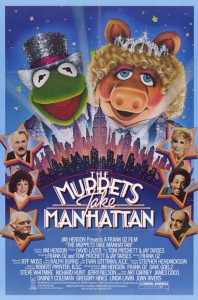 How did you come to work with Jim Henson and the Muppets?

In 1982 I was one of the few writers living in New York who had network TV credits and had sold some movies (which hadn’t gotten made, but still). I got a call from a producer friend, Micheal Peyser, who usually worked for Woody Allen (whose managers also managed me) but was helping out the Henson people; he asked if I’d be interested in what’s called a “production polish” on The Muppets Take Manhattan and, when I heard who I’d be writing for (see below), I was.

What were your contributions as a Consultant on The Muppets Take Manhattan? At what point in the process did you join the project?

I joined just a month or two before production began. The script was completely written, sets were built; all I was going to do was write cameos for some guest stars, who were going to be Dustin Hoffman, Steve Martin, Michael Jackson, Lily Tomlin, Richard Pryor, Laurence Olivier… the list went on and on.

Hoffman was going to play a Broadway producer and planned to do an imitation of legendary film producer Robert Evans (The Godfather), which he later did in the movie Wag The Dog. At the last minute Hoffman decided it might be offensive to Evans and dropped out, following which all the other big names dropped out as well. We ended up with Art Carney, Brooke Shields, Elliot Gould, Joan Rivers…

As director Frank Oz and I worked on the cameos, we ended up rewriting the entire movie — not scenes or plot or characters, that wasn’t feasible, but all the dialogue.

Do you recall any jokes or scenes that were cut from the film that you were sorry to see go?

I really liked The Great Muppet Caper and wanted to have similar zany humor in Manhattan. The Henson people, though, were unhappy that Caper did less well than the previous Muppet films and wanted to go back to what they perceived were those earlier movies’ strengths: warmth and character. Consistently, then, when I would propose something wacky, Frank (who I love and think incredibly talented) would respectfully decline. After the movie was done, he told me that may have been a mistake and a little more edginess would have helped.

The gags I most remember hating to lose were when Kermit, distraught at his failure to get the show on Broadway, goes to the Empire State Building at night and takes an elevator to the top; I suggested that when the elevator arrived, the camera should stay on Kermit as, in the background, two gigantic gorilla legs exit the elevator.

And when Kermit is on the roof shouting to the city, I wanted him to finish his impassioned speech and then hear a voice in the distance: “Shut up, we’re trying to sleep!” 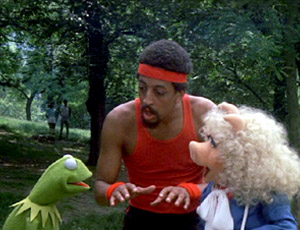 On a different topic, one of my fondest memories of the shoot was watching a Kermit/Piggy scene in Central Park. People gathered as Jim and Frank performed and goofed around between takes, always in character. I looked at the crowd and noticed that their eyes were glued to the puppets, ignoring the two very large, totally visible men beneath them. Such was the charisma of Jim and Frank… sorry, I mean Kermit and Piggy.

I remember the shooting of the wedding scene, where the largest gathering of Muppets ever took place. Dozens of puppeteers, a Muppet on each hand, stood beneath a raised stage for hours.

Fun trivia: the actor who plays the minister was really a minister. Jim wanted ambiguity about whether Kermit and Piggy were “really” married, not just in the movie, to drum up interest.

That was also the reason for the Muppet Babies, a sequence I didn’t work on and which I believe may have been directed by Jim. When I heard about it, I was opposed — it had no relevance to the plot and its purpose appeared for marketing. It was, of course, a huge success (as was the marketing).

When you were approached to work on the Inner Tube project, how did Jim Henson present it to you? Was there an attempt to deliberately avoid anything that too closely resembled The Muppet Show?

It was a kind of comeback — Jim hadn’t had a show on TV in a few years — and a deliberate attempt to move away from the Muppets to explore a new type of electronic puppetry, Jim engaging with the new age of technology. There wasn’t really a question of avoiding The Muppet Show as it was never going to be remotely like it (though, eventually, when selling it became a challenge, there was talk of Kemit playing a role).

At one meeting I suggested a sketch parodying soap operas, culminating in Miss Piggy confronting her evil “identical twin triplets.” Jim’s wife Jane, who sat in on all meetings, took umbrage at this, pointing out that whenever outsiders were given tours of “Muppet Mansion”, the Henson headquarters in Manhattan, the workshop was off-limits. The reason? It was thought that seeing dozens of disembodied Muppet heads and body parts would be too upsetting or, at least, disillusioning to the viewer. The same principle, she felt, applied to many Piggys in a scene. (I’m not sure her opinion was widely shared but the sketch was cut.)

On a similar note, to what extent was the script for Inner Tube dictated by the technology Henson wanted to showcase?

Very much, though of course Jim and I both wanted to have funny, identifiable characters at its core. 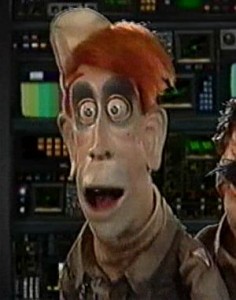 Did you have a hand in creating any of the Inner Tube characters — Jake, Henry, Crasher, Glitch, etc. — or had they already been developed? How closely did you work with the Henson team?

Most of the characters had been created but the two leads were just sketches and they were created primarily by me. I wrote for everyone, though, and also created a character for John Candy, who was going to be the guest star.

During the writing of the script and the shooting of the show, I felt honored to be Jim’s right-hand man; on the set, he wouldn’t even end a scene until I had given my okay.

Oddly, though, when the shooting was over, I became invisible. I came to understand that Jim regarded the people he worked with as craftsmen, each with their own specialty; when their expertise had been given and used, it was on to the next expert. When the writing, and shooting of the writing was done, the writer was no longer necessary.

This isn’t a criticism — Jim got the best from everyone — just an observation about the way Jim worked.

What character was John Candy meant to play? And was the project originally conceived as having regular guest stars?

The original idea was to have a guest star sucked into the Inner Tube world on a weekly basis, bouncing from show to show.

The Paul Zaloom cameo with the “video pirate” and his environmental parable is an odd moment in the pilot. How did he become involved in the project? Was it your idea or Henson’s to include the environmental message?

Jim had seen Paul perform (as had I) and was a big fan, feeling (again) that this was a way to bring a form of puppetry into the modern age. Jim and I both loved the way Paul used low-tech, everyday, found objects to create a world. The environmental message was Paul’s but we wholly embraced it. 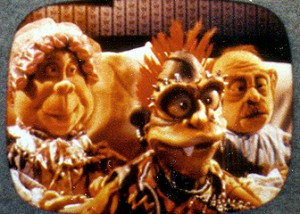 Did Henson attempt to sell the Inner Tube pilot to all the major networks? How was it received?

The primary thing I heard was that Jim’s manager, an industry heavyweight named Bernie Brillstein (he managed most of the original cast of Saturday Night Live), was lukewarm towards a 10-minute “test” version that was put together. I’m not sure if it was shopped to the networks.

Were you ever involved in the eventual Jim Henson Hour series past that early pilot stage?

Did you ever work on any other Muppet projects after Inner Tube (or before)?

No, but Frank asked me to help with the climax of Little Shop of Horrors. As in the play, the ending was going to be the destruction of the world and I came up with a number of fun ways to destroy cities and national monuments around the globe. This ending was in fact shot and previewed, to disastrous effect; the audience hated the deaths of the heroes, Seymour (Rick Moranis) and Audrey (Ellen Greene). Frank then invented the ending that’s in the movie, which I thought was brilliant. I love Shop, which I feel has been unfairly neglected — I think it’s one of the great movie musicals.

And finally, the all-important question: Who is your favorite Muppet?

Having worked so closely with both aspects of her — puppet and person — it would have to be Miss Piggy. Frank loved her too but would wryly note “I’ve spent half my life with my hand up a pig’s ass.”

Big thanks to David Misch for answering our geeky questions! Read more about Mr. Misch and his work at www.davidmisch.com! And click here to confront your evil identical twin triplets on the Tough Pigs forum!