If I had to guess, you’re a hardcore Muppet fan. That’s why you’re here on ToughPigs, because you care about these characters enough to see what the fans have to say about them as well. And if you’re hardcore about it, your family and friends are likely aware that its ‘your thing’. And so every Christmas and Birthday, you get handed a gift that’s probably an old Elmo doll or a copy of Kermit’s ‘Before You Leap’ by your extended family. And you smile and say thanks, because; a) Those things are fun and b) You’re not a total monster.

But there’s one thing you have to put up with all year round, and that’s the anxiety of seeing that little notification bell on Facebook that says your aunt in Toledo has mentioned you in a comment. And you press it, and it’s usually always one thing.

Now, you know that your aunt means well – she’s being supportive and thinks you’ll get a kick out of it! And you did, the first few times. But on the 87th tag you’re starting to get a little over it. You don’t want to just ‘Like’ the picture because that feels like you’re just fobbing it off. But also, you’ve run out of things to say.

Well, I come with good news – I’ve created a ‘fill in the blank’ letter you can send to those who send you this photo, which makes them feel validated, but also lets them know that – yeah, you’ve seen the cupcakes – a lot.

How are you? It’s been at least (Insert Length Of Time) since we last spoke. I hope you’ve been well through (Insert Current World Pandemic) and that you’re keeping safe.

I should tell you though, you aren’t the first person to send it to me. In fact, you’re the (Insert Number) person this week! Call it the plight of the Muppet fan, but it seems we’re doomed to be haunted by this photo for eternity, or at least until (Insert Personal Theory On The End Of The World). I suppose it’s how criminals on the run feel, always looking over their shoulders, never sure when the photo will pounce.

Of course, I sure am appreciative anyway! You’ve always been supportive of my Muppet nerd-dom. I remember when you asked me about The Muppets back in (Insert Month/Year). Not a lot of people ask me about it much these days. Did you know there was a Muppet series on Disney+ last year? It’s called Muppets Now and it’s (Insert Personal Feelings On Muppets Now). No, (Insert Sesame Street Character) is not in it. They’re two separate entities now. We discussed that at (Insert Last Meeting), remember?

It’s hard, being a Muppet fan. Some adults think they’re too cool for The Muppets. But no one is too cool for The Muppets. Except perhaps (Insert Coolest Cousin) haha. How’s their motorbike? I heard they took it up to (Insert Vacation Spot) last year with (Insert Cool Cousin’s Friend/Partner). The photos on (Insert Social Media Platform) were awesome. They sent me a photo of the (Insert Food Dish) they had, I almost booked a holiday there myself! I’m hoping once (Insert Current World Pandemic) is over I’ll be able to travel to (Insert Desired Travel Location). I was supposed to go to (Insert Cancelled Holiday Destination) but we had to cancel.

Please, give my love to (Insert Family Member/Mutual Friend) and let’s try to have a Zoom session soon?

PS – While we’re at it, I’ve seen the Cookie Monster rock from a few months ago, I’ve seen the ‘Evil Kermit’ memes, that Beaker video where he sings ‘Never Gonna Give You Up’ sure is funny, and this website called ToughPigs have a different letter you can read about that Big Bird Thanksgiving picture that goes around.

Click here to speculate on the end of the world on the ToughPigs forum! 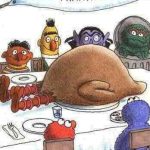