The following article was written by Whitney Grace.  If you missed her previous installments of “The World of Muppet Crap,” click here to read about officially licensed Skeksis-inspired clothing, Muppet-themed undergarments, and an incredibly obscure Muppet kangaroo.  Thanks for your dedication to weird Muppet stuff, Whitney! 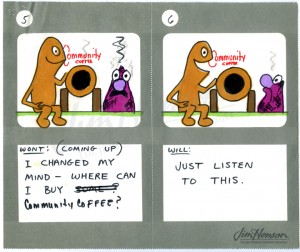 There used to be a Muppet fansite called Kermitage.com. Back in the days of Web 1.0 it was lauded as a top Muppet resource and even some Henson folk praised it as one of the best Muppet fansites. It was run by Michael Dixon, who had once had the glorious chance to interview Jim. One of his site’s main features was its extensive Muppets collectibles database, complete with pictures and details. One section was about ultra rare and super cool items that Dixon managed to get his sticky felt fingers on. One item in his museum were the Wontkins and Wilkins puppets. Wilkins and Wontkins were two characters that Jim made in the 1950s to advertise Wilkins Coffee. The key to good advertising is a good schtick, and Jim’s was violent coffee!

The coffee itself wasn’t violent. It’s not like you would pop open a can and it would explode in your face and burn off your eyebrows. No, Jim used glorious, glorious slapstick violence with cat calls, pratfalls, and bad imitations. The basic premise for each commercial was for Wilkins to “persuade” Wontkins to drink Wilkins coffee. The persuasion involved a healthy dose of you guessed it violence! Why explain when I can show you?

It’s comedic violence wrapped in the sweet pita that was Jim Henson’s imagination. These commercials wouldn’t see the theater lights in today’s hyper conservative, progressive world.  I can hear the parents now:  “The commercials are telling my kids that canons are playthings.”  “My son now believes the laws of physics don’t apply to him.”  “My baby drinks Wilkins coffee and it stunted his growth.”

Oh wait, the last one might not have resulted from Jim’s commercial.  Or maybe it did. My point is that people are complaining a lot about things these days. No I take it back, people have been complaining for ages. The Internet just gives them a more ready forum. 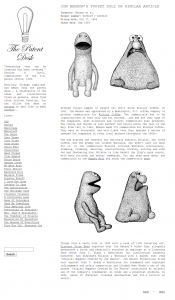 This type of humor isn’t done very much anymore, but I can tell you it still works. Wontkins and Wilkins were popular, but you don’t see a toy line based off a pair of coffee characters. They were popular enough, that Jim secured the patent for the character designs. Wilkins Coffee did make puppets off the pair you could get by sending in $1 and a can lid.

Eight to ten weeks later, you’d get the happy Wilkins and the moaning Wontkins. They were made of a flexible plastic, perfect for playtime, but not to last through the decades. Wontkins and Wilkins chunks probably littered many bedroom floors or found their way down a dog’s gullet.

Time and degradation sent many Wontkins and Wilkins puppets to the rubbage heap (this was before Marjory moved into the neighborhood or even Oscar the Grouch). There aren’t many around anymore and they’re a rare and sought after Muppet collectible.

During my eBay adventures, I’d usually see one set every year going for $500-600. I even witnessed a violent (minus the explosions) bidding war that escalated from $300 to $800 in ten minutes.

Part of me considered telling my own furry menagerie of pets to put off their chew bone and squeaky toy budget for a year so I could afford to buy the coffee mates. But looking into four sets of brown eyes and two baby black (my fish — they like hopping on squeaky toys because they produce bubbles), I decided that no, it’s not worth my family’s misery or the rampant destruction of all furniture, books, TVs, and cell phones in the house.  (Ask me to tell you one day how a three pound chihuahua puppy with barely any teeth masticated a flip phone.)

Moving on, I couldn’t justify it. (Really the pets had watched a bunch of those Wontkins and Wilkins commercials. They tied me up up, hoisted my grandmother’s piano over me, and asked if I still wanted to buy the puppets. Note: I didn’t.)

I know Muppet fans want these puppets as do some toy collectors. They used to appear in limited quantities, but lately my usual eBay strolls have yielded as many as three auctions with these guys. What? I have never seen so many Wontkins and Wilkins in one place as of writing this article. How much are they going for? They’ve been placed around $200-300 each. These puppets’ going price have significantly dropped from the high hundreds to the low ball park. 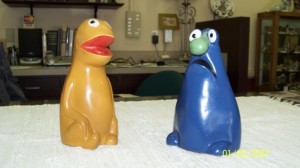 Time for an economics lesson: supply and demand. High demand with low supply pushes the price up, but high supply and low demand (I’ll get to that in a minute) drives prices down.

That’s not the only thing I noticed about the auctions. What I’ve found is that I’ve been seeing the same Wontkins and Wilkins auction listings for months. Nobody is chomping, like my puppy on my cellphone, on their hands to buy these puppets.

They’re priced fairly and are in good condition.   They’re a piece of Muppet history!

My theory is that the Muppet fans who want these items are aging out. Before you come after me like rabid shoppers in 1998 after Tickle Me Elmos, let me explain. A lot of the die hard Muppet fans who know about Wontkins and Wilkins are growing up… more. The new fans brought up on the Disney Muppets probably aren’t that familiar with the pair, much less have the dough hiding in the coffee can. 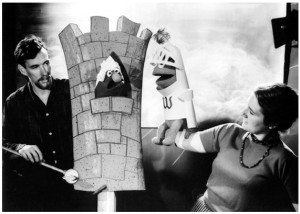 If you look at the time line, from around the mid-nineties to 2012 the Muppets weren’t in the limelight. An entire generation didn’t know who the Muppets were. It was a sad, sad time and it didn’t motivate people to buy Muppet stuff, much less pricey antiques. Really the only way Muppet fans know about Wontkins and Wilkins is if they read a book (how passe), Wikipedia article, or watch a historical Jim video.

Unlike when the Wilkins Coffee commercials aired, you have to actively search for material on these guys. It’s a basic advertising scheme: if you’re not bombarded with constant images of a product you’ll soon forget them. That, paired with a lost Muppet generation means more than a moaning Wontkins. The problem is that the older collectibles are losing their niche market. They might be valuable and cool, but are they still wanted?

I think we should resort to threat tactics like Wilkins did to get people interested in these guys again. I have a limited edition Gonzo the Great Stunt Double kit, guaranteed to teach the Master’s greatest feats. It comes complete with bagpipes, fungi, sparkly outfit, and a bazooka. I don’t want to break the NRFB seal, but I’m going to do it for Wilkins and Wontkins.

So dear readers, I’m armed with a bazooka and a pack of ferocious ankle biters armed with miniature bazookas pointing at your very location right now.

Now do you want to purchase the Wilkins Coffee duo? 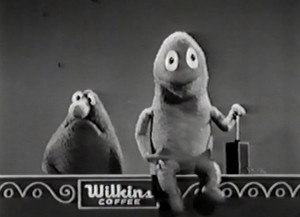 P.S. If you have disposable cash and love Muppets now is the time to buy.

Click here to kill your friend over coffee on the Tough Pigs forum!