The following article was written by Tough Pigs’ own Matt Smith. Thanks for correcting the internet, Matt! 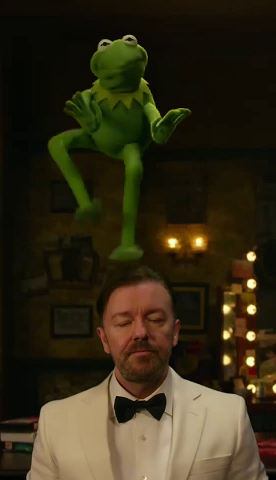 In case you haven’t heard, there’s a new Muppet movie out in theaters right now… and it’s pretty darn good. There’s spectacle, there’s fantasy, there’s daring-do, and stuff like you would never see!

I’ve read many of the reviews for this new movie and most of them are quite positive (the film is currently rated “fresh” on Rotten Tomatoes, if that kind of thing matters to you). However, there is one recurring complaint that keeps popping up in some of the online reviews (or the comments section below them) that is really getting to me. And, if someone is wrong on the Internet, I feel it is my job to correct them (that’s how the Internet works, right?). It’s not so much that I’m upset that these “critics” are wrong, but I’m sadden that their wrongness comes at the expense of hardworking Muppet performers.

You see, there are some incorrect “assumptions” out there about the use of computer generated imagery (CGI) in Muppets Most Wanted.

Sadly, many viewers simply assume that these incredible feats were accomplished through the use of computer animation. We live in a post-Pixar world and see such CGI-created visual effects on a daily basis – from Jar Jar Binks and Gollum to the Smurfs, Scooby Doo and squeakquel’s full of singing chipmunks. So it’s easy for some to simply assume that the visual effects would be (as the film’s opening song would say) “more of the same.” But the producers didn’t simply say “Siri, make the frog dance” and then take a long lunch break while some computer spit out Constantine’s elaborate dance routine. The characters in Muppets Most Wanted weren’t brought to life through computer animation – it was all old school puppetry.

Director James Bobin stressed this in a recent interview with Den of Geek!, stating that “there’s no CG work – we don’t ever have a CG character, because it’s about puppeteering, felt, fur and texture. They’re real!”

Puppeteer Matt Vogel (performer of Constantine and others) sent out a multi-tweet response to complaints of CGI characters in the film:

“You may have read reviews saying that Muppets Most Wanted used CGI instead of puppets. Well… we didn’t. We used puppets. Puppets for the fighting, puppets for the dancing, and puppets for the puppety parts, too. I know it’s easy to assume nowadays that we might use CGI – heck, we could do that. And while a computer may have been employed to fix a shot or a character for some reason or another—at the end of the day, what we used to accomplish the fighting, the dancing, and the puppety parts…was good old-fashioned puppets.”

According to Vogel, Constantine’s opening escape down the hallway took four puppeteers and four versions of the Constantine puppet to accomplish – with real stuntmen serving as the guards. Talk about coordination, rehearsal, commitment and hard work! Sure, the sequences were shot against a blue screen (in order to remove the puppeteers and the rods and strings) before composing the parkouring frog into the gulag backgrounds, but no CGI stunt doubles were used. It’s all actual puppetry! Like Kermit riding a bicycle. 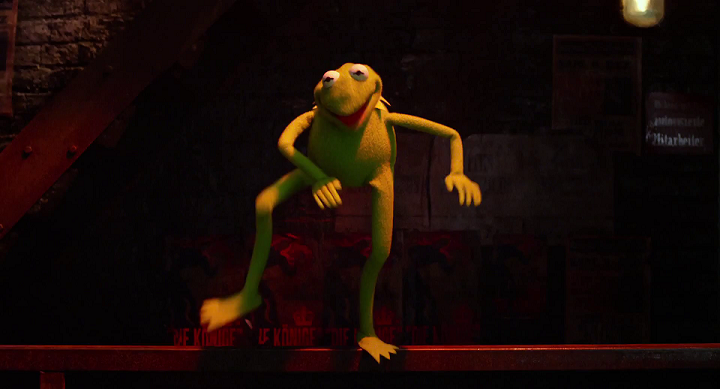 James Bobin fielded more questions of CGI use during an interview with Comic Cook Resources:

“The fundamental rule of thumb is that we have to have a puppeteer perform before a camera. So even though Constantine’s jumping around the corridor and jumping out of the passageway and stuff in Berlin, that is still Matt Vogel in the head and that’s three or four, sometimes six, people puppeteering the limbs. That’s all just blue suits, and then we [composite him] into the images. So you shoot plates and work it out that way. But it’s still puppeteering. At no point in the film is there a full CG-realized character. There’s no full-CG Kermit or Constantine, it’s still puppeteering. That’s really important to me because the world is full of CG. That’s fine, but Muppets are the last bastion of non-CG material, you know, I mean it really is. So it’s important to stay true to that to me because I like CG, but I think Muppets is about them being real, they’re tactile. They are made of felt and fur. When you come to set you can touch them. That’s lovely, and it’s really an old form of entertainment and it goes back centuries, you know? I mean, so the fact that we can still make puppet movies, or puppeteering has been around in three centuries, it’s pretty great.”

The techniques used in Muppets Most Wanted aren’t anything new for the Muppets, in fact they are merely extensions of techniques they’ve been using for decades. In The Muppet Movie, a memorable sequence featured a full-body Kermit and Fozzie dancing their way out of a jam at the El Sleezo Cafe. The technique Bobin and the crew used to make Constantine dance on a European fire escape are essentially the same as the techniques Jim Henson used over 35 years ago to make the frog and bear dance on the El Sleezo stage – although Henson used a black background to composite the characters in 1979 rather than a blue one (on a side note, the Muppets rarely use green-screens for compositing because Kermit gets lost against the green chromakey background). 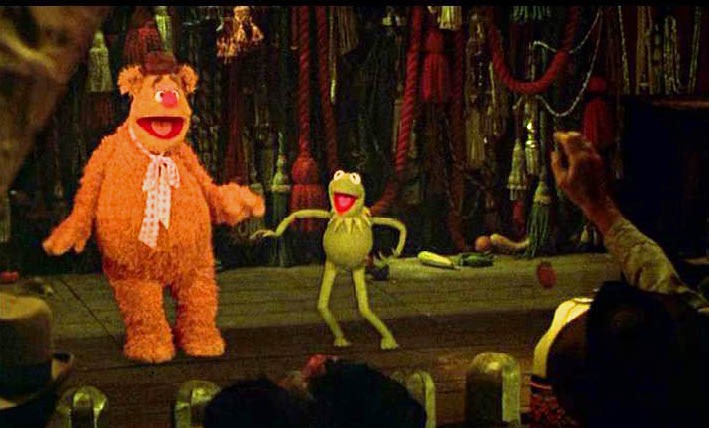 And years before Constantine did a full-body dance with Dominic in Muppets Most Wanted, a full body Kermit danced a tap routine with Gene Kelly on The Muppet Show. 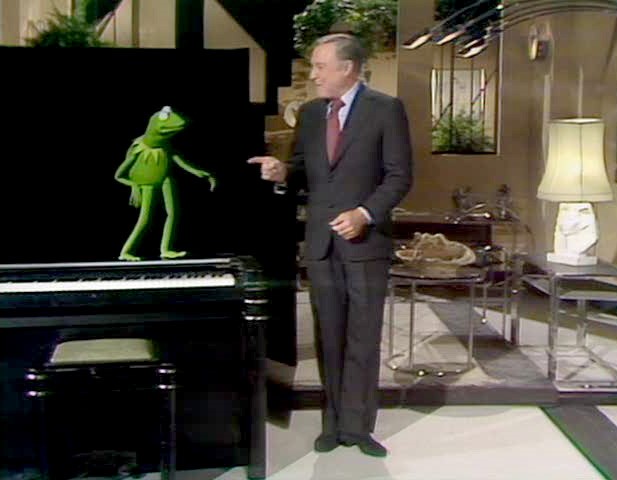 The Muppets have always been using a variety of puppetry techniques and filmmaking tricks to bring their characters to life. Remember Bob Cratchit and Tiny Tim walking down the street singing a jolly Christmas scat song in The Muppet Christmas Carol? Or Captain Smollett leaping into a sword fight with Long John Silver in Muppet Treasure Island? They’re no different than Constantine’s prison escape. If you want a list of more examples of these types of techniques used by the Muppets over the years, check out this comprehensive list on the ever-impressive Muppet Wiki.

Now I know that computer animation is an art onto itself, and (despite my joking earlier about how “easy” employing CGI Muppets would have been for the filmmakers) I truly do not mean to belittle hardworking animators and computer designers who meticulously and artfully bring life to digital characters. The Muppets have always embraced digital effects (check out this comprehensive page of the always-remarkable Muppet Wiki for more on that subject). But I do want to set the record straight on Muppets Most Wanted – no computer-animated Muppets were used in the making of this film. And I want to take a moment here to show some much-deserved respect to the puppeteers and performers who brought physical life and fluid movement to these tangible characters, in a coordinated effort, in real time, in front of the cameras. 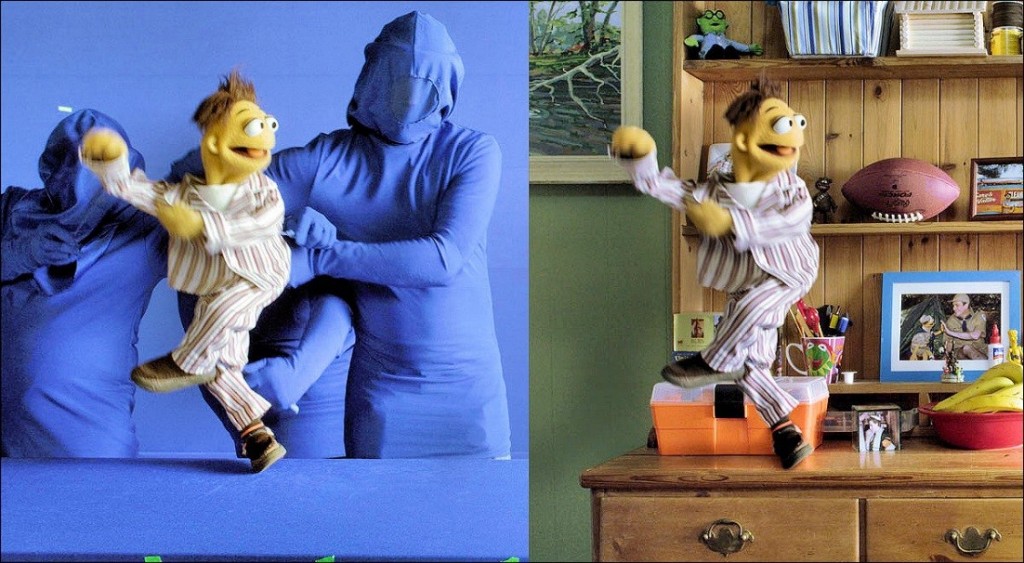 The choreography of these sequences and the flawless execution of them is something to be commended, appreciated, and applauded. These puppeteers have made the illusion of the Muppets seem so real that the only way some people can comprehend what they are seeing is to tell themselves that a machine must have fabricated it all. But they’re all real Muppets in the felt and fur, moving in real space in front of a camera. So don’t believe the critics that cynically say the Muppets have sold out their puppetry roots in favor of flashy CGI trickery. Puppetry is alive and well in the Muppet troupe and the artists, puppeteers and performers in Muppets Most Wanted have taken it to impressive new levels.

So, here’s to the puppeteers and craftsmen that brought the Muppets to life on the big screen. Keep up the great work, keep pushing the boundaries of puppetry and filmmaking, keep believing, keep pretending… 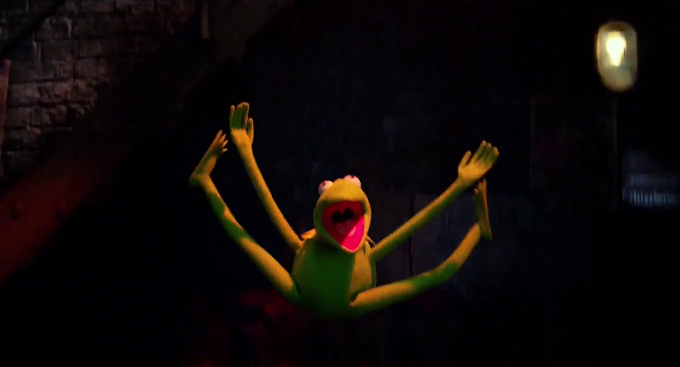 …Thanks to the lovers, the dreamers and cheese.

Click here to perform an action-packed parkour-filled sequence on the Tough Pigs forum!