We are saddened to learn that Artis Ivey, Jr., better known as the rapper Coolio, has passed away.

Among his many career accomplishments, Coolio wrote and recorded hit songs “Gangsta’s Paradise” and “Fantastic Voyage”, and appeared in films like Batman & Robin and Leprechaun in the Hood.

But his greatest accomplishment, in this writer’s humble opinion, was his appearance in the second season of Muppets Tonight. The episode, which he shared guest star billing with Don Rickles, features Coolio and Clifford teaming up for a Milli Vanilli spoof, and a rendition of Coolio’s song “1, 2, 3, 4 (Sumpin’ New)” with the Muppet cast. Coolio performs the number to prove that “hip is not what you do, it’s how you do it.”

Coolio was such an iconic representation of the ’90s and the world of hip-hop, and we’re proud to have included him as a valued member of the Muppet community.

Click here to help us remember Coolio on the ToughPigs forum! 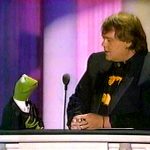