I have a lot of Muppet stuff. It’s on my shelves, on my walls, in boxes under the bed and in the closet. It’s a lot of stuff. And yet, there have been those items of Muppet merchandise through the years that caught my eye, that I coveted, but that I never owned. 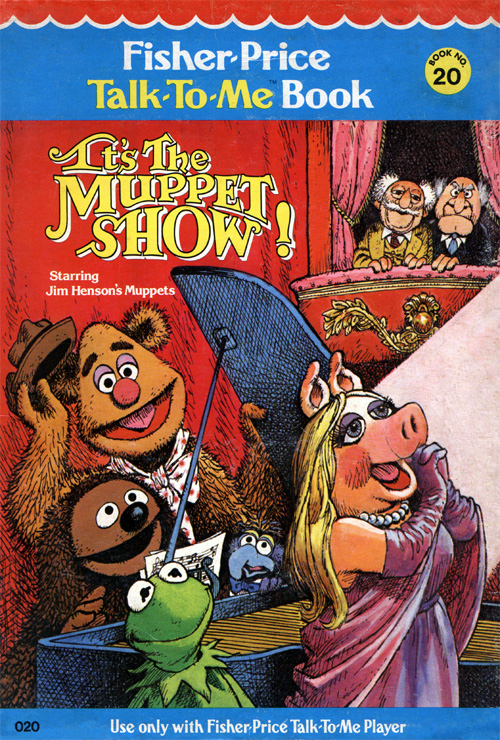 When I was a kid, I loved going over to my friends’ houses. Because I enjoyed their company? Eh, sure. But also: So I could play with their toys. No two households have an identical toy collection, and going over to a pal’s after school was a great way to get my hands on toys I wanted but didn’t have – and toys I had never even heard of.

I was fascinated to find, while rummaging through my friend Daniel’s stuff, a book called It’s the Muppet Show! Every page had text, which seemed normal enough for a book. And there were illustrations. Indeed, this was also not unusual for a children’s storybook! But each page also had a funny little thing embedded in it that looked like a miniature vinyl record. What the heck was this doohickey? 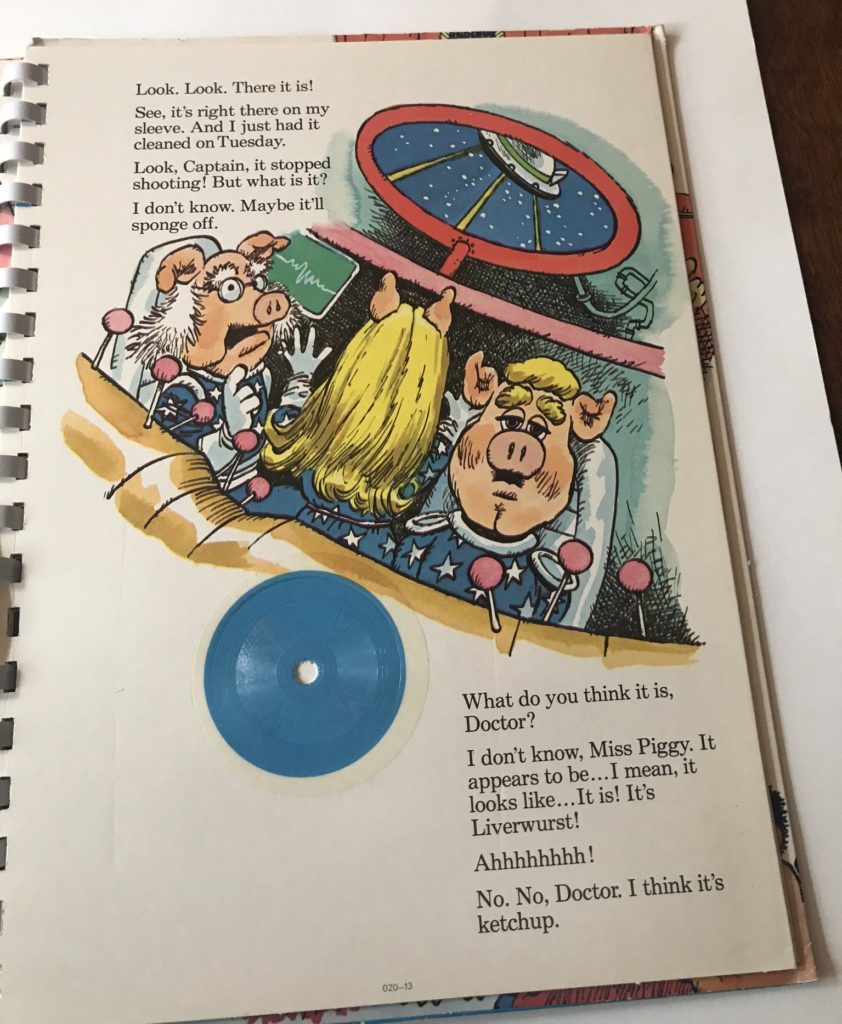 My friend Daniel explained to me that the book was part of a series made to accompany a handheld device. The device was designed to be pressed to each of these records, at which point the record would play audio of the characters acting out the action of that page. So when you pressed the player on the little record on the “Pigs in Space” page, you would hear Link Hogthrob, First Mate Piggy, and Dr. Strangepork. And when you pressed the player on the record on a page featuring Gonzo, you’d hear Gonzo explaining his latest stunt to Kermit. And so on. This was the Fisher Price Talk-to-Me technology.

Wow! Is that miraculous, or what? For whatever reason, I tend to be more impressed by old analog technologies than modern digital tech, and this is a perfect example of that. Like, sure, I’m not surprised that I can stream any song I can think of on a cylinder in my kitchen that talks to me. That’s nothing. But the fact that somebody at Fisher Price figured out not only how to make such a tiny record player, but how to put it to good use telling stories about Muppets and Mickey Mouse and Dr. Seuss and things? That’s incredible!

But here’s the tragic twist: By the time I befriended Daniel, his Talk-to-Me player had long since been lost. He only had the book. (If you’re wondering why I continued to be his friend and come over to his house, the answer is simple: He also owned the “Mega Core Magnetizer” Lego set.) I never got to hear what tiny-record-Kermit sounded like. 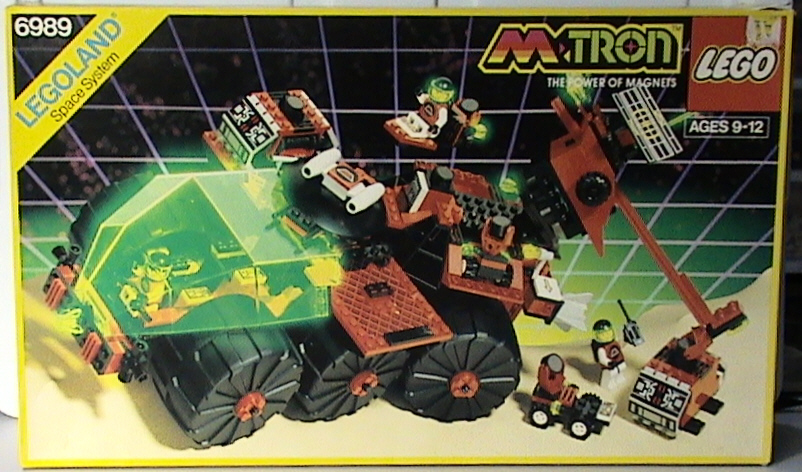 As far as I know (and as far as Muppet Wiki documents), this was the only Muppet Show book for the Talk-to-Me player. But just think – as Muppet fans, we’ve seen all the shows, movies, specials, and even watched the direct-to-video releases. But here’s a whole Muppet Show tie-in production, with all the Muppet performers’ voices… and how many of us have heard it? Not many, I’m guessing!

There were also a handful of Sesame Street books: Big Bird’s Look and Listen Book, Grover Visits His Granny, I Wish I Had a Giraffe (starring Big Bird), Welcome to My Castle (starring the Count), and Good Night, Sesame Street, which I really hope reads like Good Night, Moon (“Good night, Hooper’s; good night, Oscar’s elephants; good night, dozens of broken toasters at the Fix-It Shop?”) 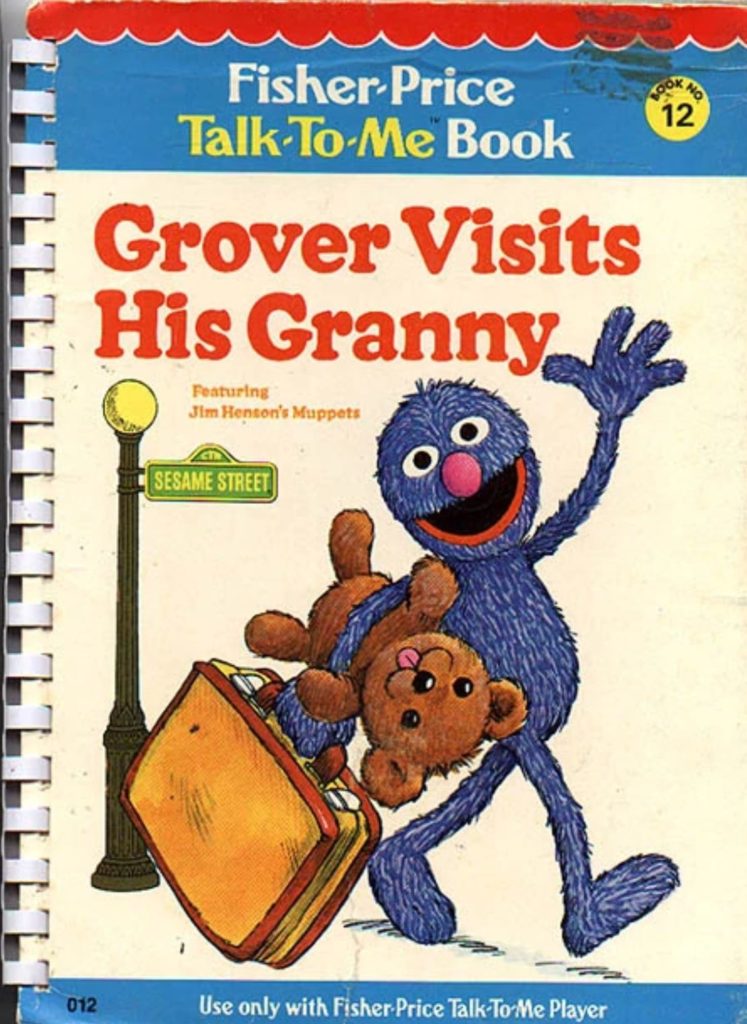 It’s brilliant, really. These things came out in the late ’70s and early ’80s before VCRs were common, so this was a great way for kids to hear their favorite characters even when it wasn’t time for the TV show. And the Talk-to-Me device allowed kids to get the whole story, even if they couldn’t read! And it let parents off the hook for book-reading time, so they were free to go watch St. Elsewhere at bedtime!

Sesame Street’s own Chris Cerf is credited as “sound director” for all these titles, so you know they must be legit. Unfortunately, I never have managed to find one at a garage sale. Nor have I purchased one on eBay. I did find a video on YouTube that features a brief demonstration of the Grover book, using a similar player made by a different company:

Presumably Grover didn’t sound quite so wobbly when the book and player were new. Or maybe Grover just took Benadryl before the story started.

Anyway, I can’t imagine why they didn’t make more of these things. It’s all the fun of a read-along record, but instead of playing the record over and over, you have the option of playing every page of dialogue over and over! And over! And over! That’s worth going over to your friend’s house for. Even if you don’t like your friend! Or you could just steal it from your friend and be done with it. Just kidding. Don’t steal things. Or if you do, don’t tell anyone you got the idea from this website. Thank you.

Click here to wish you had a giraffe on the Tough Pigs forum! 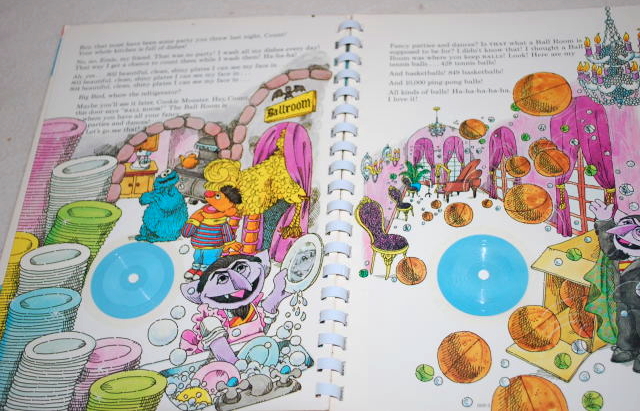 True Love on The Muppet Show