If you visited ToughPigs yesterday, you may have noticed a change or two.  No, it’s not the sudden inclusion of the “About Us” link.  Constantine, the world’s most dangerous frog, took over.

Apparently that was a popular April Fools Day joke.  Muppet blogs The Muppet Mindset and Muppet Stuff did something similar, as did several Muppet Tumblrs.  But we had something they didn’t have: The real Constantine!

Thanks to the generosity and talent of Muppet performer Matt Vogel, we were able to provide an exclusive audio message from Constantine himself.  And I agree with what you’re probably thinking: I can’t believe we got him to do it either.

Listen to the message from Constantine below:

As for the rest of the site, we have our resident artist Chris “Smig” Smigliano to thank.  Not only did he design an explosive (heh) new logo, but he also created six new Constantine designs for the icons on our sidebars.  Seriously, that guy is talented.

To jog your memory, here’s what the site looked like on April Fools Day: 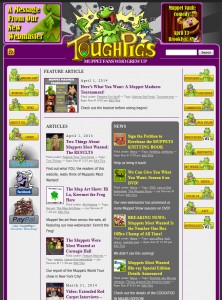 And here are the icon images, as illustrated by Smig, in full form: 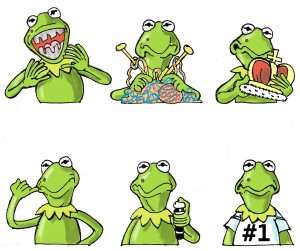 In addition to changing the look of the site, we also wanted to create new articles, as inspired by our “new webmaster”, Kermit/Constantine.  We decided to take the articles off the site, because it would be an even crueler joke for someone to Google “Muppet Show DVDs” and find our fake article about the fictional season 6.  So instead, we have screenshots preserving the articles, all eight of which you can read below:

Once again, thanks to Matt Vogel and Smig for all their help in making a successful April Fools Day spectacle!  And thanks to everyone out there who read and enjoyed our work.  Now we can look forward to 2015’s April Fools Day when Mildred takes over the site…

Click here to search for the mole hidden in the ToughPigs forum!