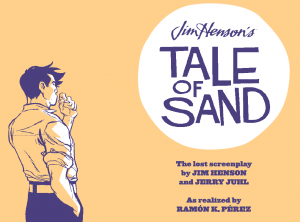 Jim Henson and Jerry Juhl were full of ideas.  They were so full of ideas that they wrote an entire feature film screenplay that never got produced and that Muppet geeks didn’t even know about until just recently.  Tale of Sand was written by Jim and Jerry around 1969, and later revised in 1974, but they could never find anyone willing to finance it.  That’s not surprising — It has huge crowd scenes and wild animals and car chases and big explosions, so it would have cost a lot of money to make back in the day.

When the Tale of Sand script surfaced in the Henson Company archives, I’m sure the Henson folks were tempted to try producing it as an actual film.  With today’s movie technology, you can create all that stuff semi-convincingly with a greenscreen and some CGI.

But they didn’t make a movie, they teamed with Archaia Comics to make a graphic novel, which was (FINALLY!)  released last month. Archaia has done great work with translating existing Henson properties to comics, and the comics medium proves to be the right choice for this project.  With Jim and Jerry gone, any producers or directors would have had an enormous responsibility to do justice to their great “lost” work, and besides that, any kind of mainstream production would probably have required some cuts to the original screenplay, but this format allows us to experience Jim and Jerry’s entire story without constantly asking, “Is that really how they would have done it?”

The first thing you notice when you hold this book in your hands is how pretty it is.  The price tag reads $29.95, but I would have easily expected to pay ten dollars more than that.  It’s a lovely hardcover with a simple but appealing design, and it even has a little ribbony thing that I think is meant to be used as a bookmark.  As if any Henson fan could restrain themselves from devouring the whole book in one sitting! 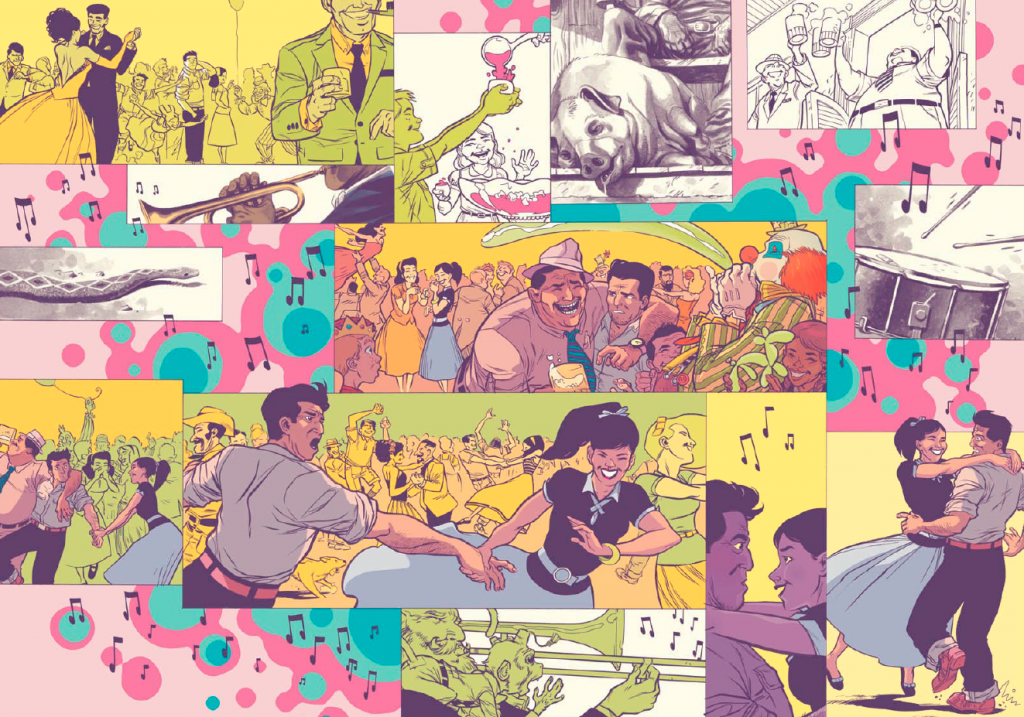 I’m a pretty big comic book geek, but I had never heard of Ramón K. Pérez before this book was announced, so I wondered why Archaia and Henson didn’t choose a more high-profile artist, but now I can’t imagine another artist doing any better with the material.  I’d be interested to know how much instruction he got from the Henson Company and how much creative freedom he had in interpreting what was obviously a crazy script, but the result is fantastically readable.

The layouts vary — sometimes the pages are crowded with panels, sometimes there are full-age drawings with no panel borders at all.  Sometimes pages and pages go by without dialogue, so the art has to carry all of the action.  But it’s never confusing, which is pretty impressive for a story that features stuff like a guy getting chased through the desert by an Arabian army and a football team.

I also want to mention the colors, an aspect of comics that I don’t even notice most of the time.  Ian Herring is credited as colorist alongside Pérez, and the colors are just as beautiful as the art itself. The script is called Tale of Sand, and it takes place in the desert, so as you might guess, there’s an abundance of sand in it. But the clever, not-always-naturalistic coloring prevents the whole book from being page after page of orange or brown. 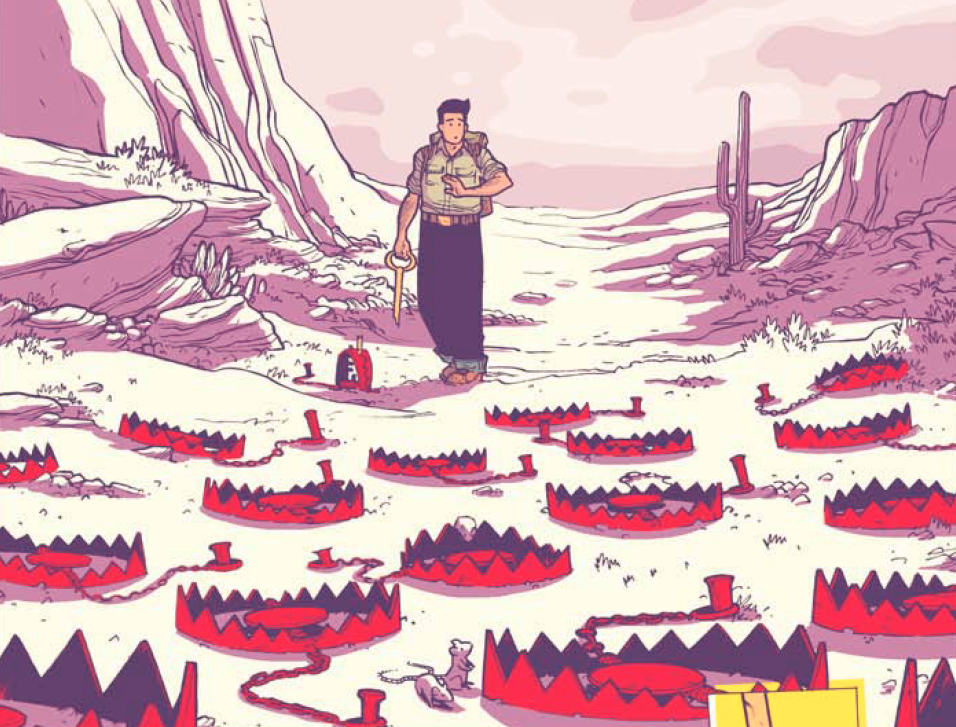 Oh hey, what about the story?  It’s good too!  Although Henson and Juhl were geniuses, not every single thing they ever worked on was pure gold, so it would have been unfortunate but not impossible for Tale of Sand to be lousy.  And it’s altogether likely that some of those Hollywood producers who rejected the project just didn’t like it.  But it’s a rollicking good time, with tons of weird, funny moments, and you really never can guess what’s going to happen next.  If you like Timepiece and The Cube, you’re going to like Tale of Sand.  It feels exactly like the next project Jim and Jerry would start on after The Cube, with similar themes and an all-around similar vibe.

In The Cube, you have a guy stuck in an inescapable prison which may or may not represent life itself, as a series of unusual characters enter, torment him, and exit.  Tale of Sand gives its lead character a bigger space to inhabit and the ability to explore it, but as in The Cube he’s hampered by bizarre happenings that are beyond his control or understanding. 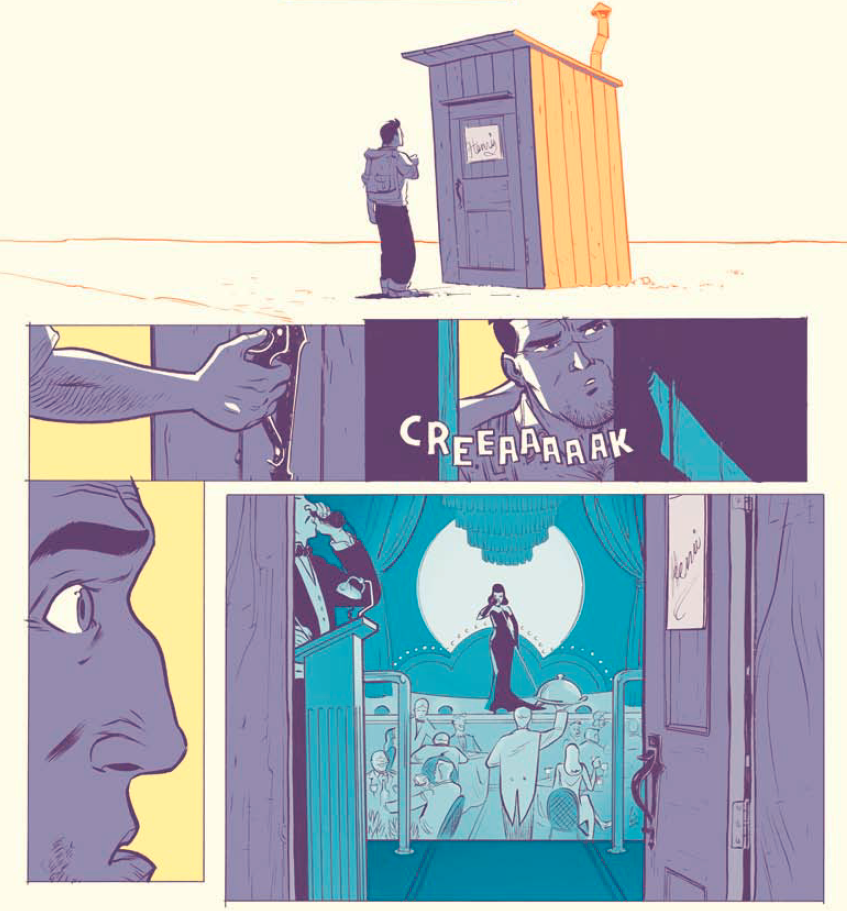 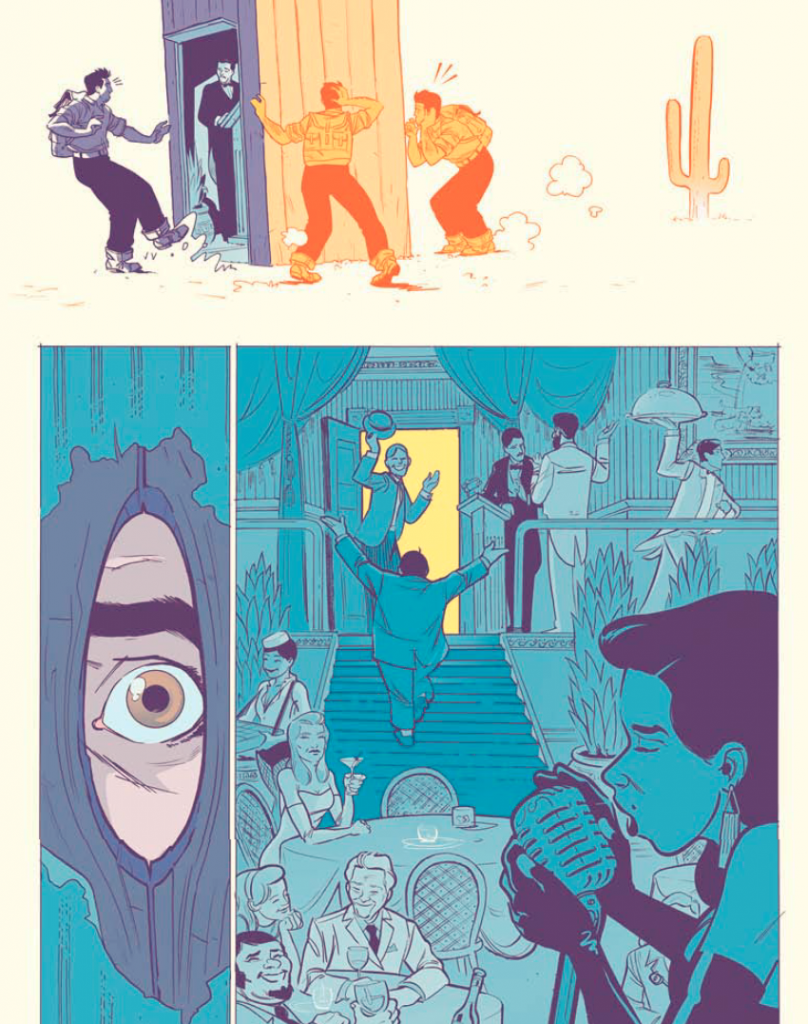 The protagonist is Mac, a “muscular, stocky man in his late thirties,” according to the screenplay (excerpts of which are cleverly integrated into the art at various intervals).  As the story begins, he finds himself in an old Western town, where all the citizens have gathered for a celebration, which turns out to be in honor of Mac.  Apparently, he’s supposed to go on some kind of journey, and everyone is really excited about it.  The town sheriff gives Mac a debriefing that doesn’t explain anything at all, hands him a map, and sends him off into the desert.

And that’s pretty much the premise of the thing.  There’s no formal beginning/middle/end structure, and if Mac learns anything over the course of the book, I couldn’t tell you what it is.  There is conflict, though, and plenty of it… Mac has to pass numerous obstacles, some dangerous and some ridiculous, and throughout his expedition, a mysterious man appears to make life difficult for him. (He’s not identified in dialogue, but the script calls him Patch.) 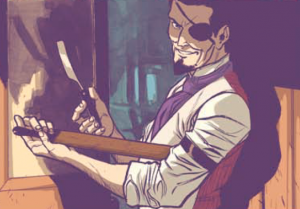 Just as there’s no plot, there’s no character development to speak of.  Mac is just a guy — we don’t know anything about him, or where he came from.  He exists only to move from one strange and surreal situation to the next.  That’s probably another good reason this is a graphic novel and not a real film… If it were a film, we’d be talking about how a proper movie needs a three-dimensional lead character, but the visual emphasis provided by the comic book format makes it matter less.

I guess it’s cliché to make this analogy in a book review, but Tale of Sand is like a ride… There are sudden drops and turns and loops that are kind of disorienting, but it’s all so entertaining that it’s worth it.  It’s not like a Muppet production, but it’s unmistakably a product of the Muppet guys. Their sense of humor is present throughout, and as the Archaia folks have pointed out, even the western setting echoes (or whatever the opposite of echo is, as Sand was written first) the ghost town from The Muppet Movie.  For this screenplay to have been uncovered from the depths of the Henson archives and turned into a work of art that we can own and enjoy over and over again is the happiest possible ending this Tale could have had. 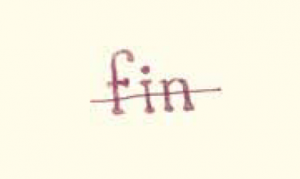 Click here to walk through a field of bear traps on the Tough Pigs forum!