Jarrod Fairclough – I’ve rewritten this article three times in 36 hours.  I started almost immediately after posting about Caroll Spinney’s passing, but I had to stop.  I had to think.  How am I supposed to essentially eulogize a man I never got to meet?  It’s an impossible task, one I don’t relish having to do.  But it’s one I’m committed to – after everything Caroll did for the world, I could take some time to find something to say.

Then I remembered something.  Way back in 2014, Copper Pot Pictures released I Am Big Bird, the documentary on Caroll’s life.  Through my fandom, I had become friendly with the directors of the film.  My contribution to their Kickstarter had meant that I was entitled to join a group Skype chat, but circumstances out of my control prevented me from taking part.  I was devastated – I wanted to thank Caroll for everything.  The team at Copper Pot were disappointed I didn’t get my time with Caroll, and when they told him I was unable to take part, he told them to sort out a time where we could Skype, one on one.

But, his schedule prevented that from happening, which truthfully never bothered me.  The mere fact that Caroll had even suggested finding a way to have a conversation meant the world to me.  He could have easily shrugged and told them that it was too bad.  But no – he wanted to make it work.  The team at Copper Pot later reached out, telling me they were planning on attending a screening of I Am Big Bird at the Melbourne International Film Festival, and they’d be bringing Caroll with them.  When Caroll heard about this, he told them to make sure I got the chance to meet with him, maybe even have dinner with the team.  But, alas, they decided not to come out to Australia after all.  Again, while disappointed, it didn’t bother me.  He had suggested it, and it meant the world to me.

He made time for everyone.  Even through his dystonia, Caroll was still travelling the country when he could, meeting fans at conventions.  While his body betrayed him, he was still determined to make an effort to meet with everyone he had touched over the last five decades.  It’s the epitome of a legend, someone who, despite everything against him, pushed on and made the time to be an ambassador for something he believed in.  He was absolutely entitled to have a peaceful retirement, to live out his time with his loving wife Debi and their brood of children and grandchildren.  But no, Caroll Spinney continued to give, give, give.  And the world could not be more grateful for it.

Eventually, thanks to Matt Vogel, I got a chance to thank Caroll via video message on Below The Frame.  In writing this piece, I went and rewatched that part of the episode, and as I speak, a small smile flashes on Caroll’s face.  I had never noticed that before today.

I did it.  I made Caroll Spinney smile.  And it means everything to me.

Something surprised me yesterday, after the news broke of Caroll’s passing.  It was the sheer amount of love and grief which came from the world.  Huge names were tweeting about him, including many who hadn’t met him.  There were tributes by Michelle Obama, Hilary Clinton, Ryan Reynolds, Bo Burnham.  And they were sincere and heartfelt.  But then I thought, why is this surprising to me?  I think it’s because it’s easy to forget just how many people Caroll touched.  Sure, we tend to think we appreciate Sesame Street a little more than your average folk, but that doesn’t mean the average folk don’t appreciate it.  Ryan Reynolds likely grew up singing ‘I Love Trash’ to himself.  Michelle Obama likely knows what the alphabet sounds like when pronounced as one word, thanks to Big Bird.  There’s every chance that your next door neighbour had a Big Bird plush on her bed as a child.  For five decades, Caroll managed to touch the lives of hundreds of millions of kids and adults alike around the world.

So sure, as Muppet fanatics we tend to think that Caroll belonged to us. But Caroll wasn’t ours.

Caroll Spinney belonged to everybody. 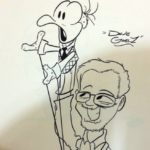