C Is for “Celebrating Joe Raposo”

The opening of the permanent Jim Henson gallery at New York City’s Museum of the Moving Image is growing closer by the minute, and the museum and the Jim Henson Legacy have been doing a fantastic job of whetting fans’ appetites with their monthly series of “World of Jim Henson” screenings.

This month was “Jim Henson and the Music of Joe Raposo,” with special guest Nick Raposo, Joe’s son and the licensing manager of the Joe Raposo Music Group.  The clip compilation was exactly what the title suggests, an overview of memorable intersections between the work of two creative geniuses.  Even when these screenings consist primarily of stuff I’ve already seen, it’s always a hoot to see it with a responsive audience, and it’s even better when there’s a special guest with unique insight on the material. 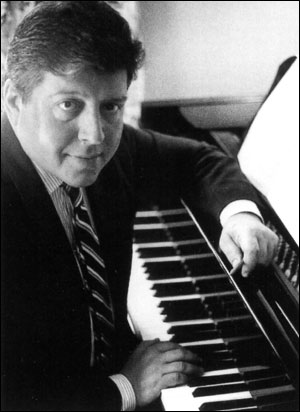 The compilation was deftly edited by Craig Shemin (who also moderated the event) and Stephanie D’Abruzzo, and most of the clips shown were Sesame Street songs written and/or sung by Raposo (“C Is for Cookie,” “Doin’ the Pigeon,” “Peanut Butter”), along with a handful of tunes from Muppet specials and The Great Muppet Caper.  Several times the clips transitioned from one version of the song to another — like Tony Bennett singing “Little Things” fading to an older version with Raposo singing over film of children, or a montage of Kermit singing “Bein’ Green” on Sesame and various talk shows and variety shows.  We take that song’s status as a legendary old standard for granted now, but apparently it became a classic within a few years of Sesame Street‘s debut.

There were also a few lesser-known clips, including:

-The “If I Could Go Dancing” number from the original Cinderella pilot.  Not Hey Cinderella, but the older project from years earlier, which was thought lost until Henson Company Karen Falk just recently located a copy.  The clip was in black and white, and it wasn’t Belinda Montgomery as Cinderella but Jill O’Hara.  Rufus was still playing himself.

-The musicians from the Sesame Street band playing “Windmills of Your Mind” as arranged by Raposo, in a filmed piece directed by Henson for an RCA stereo television demo.  That one is actually on the Henson Company’s official YouTube channel, so you can see it here: 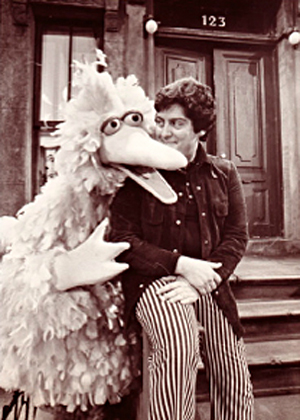 Nick Raposo’s introductory remarks and answers to audience questions included several interesting facts, some of which I’d never heard before:

-Nick and his siblings were on Sesame Street multiple times as kids, but he doesn’t know which segments or episodes.  Kermit Love once traumatized him by putting him inside the Big Bird puppet, which was terrifying.

-For the songs with Joe Raposo’s vocals over films of kids or nature or what-have-you (“Somebody Come and Play,” “Frog Struggle Song,”) Raposo would usually get the film from CTW and write the song after watching it several times.  Sometimes he would write and arrange a song overnight and the band would record it the next day.

-Ivy Austin, who sang lead on several Sesame Street classics like “A New Way to Walk” and “Cereal Girl” is the daughter of the late Danny Epstein, the show’s longtime percussionist and music coordinator.  Sure, that’s a small detail, but as a Sesame nerd I love finding out about stuff like that.

-Joe Raposo didn’t have a favorite of his songs for the show, but “Somebody Come and Play” and “Bein’ Green” were close to his heart.

-When Nick Raposo hears the original version of “Sing” now, he’s struck by how slow it sounds, considering people think of it as being such an upbeat song. 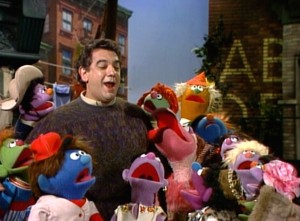 -Throughout his career, Joe Raposo continued to get excited about working with celebrities.  He was thrilled when he got to work with Placido Domingo (alongside Placido Flamingo) for “Look Through the Window” from Sesame Street: 20 and Still Counting.

-Raposo didn’t expect “Bein’ Green” to be so popular.  As the story goes, Jon Stone told him they needed “a song for the frog,” and Raposo wrote it overnight.  One of the first major artists to cover it was Frank Sinatra, when his lawyer’s wife saw Kermit sing it on TV and suggested it would be a great song for Ol’ Blue Eyes.  This despite the fact that Frank Sinatra was not actually green.

-Raposo kept color-coded strips of tape on his piano at home representing the singing ranges of all the major Sesame performers so he could write for them.

-The live concert appearances with the cast (as heard on the record Sesame Street LIVE!) were challenging for the performers and the band.  Will Lee (Mr. Hooper) had trouble coming in on cue, so in rehearsals Danny Epstein had to tap him on the shoulder when it was time for him to start singing.  For the live show, Epstein was playing in the band, so he rigged up a string he could pull on which would yank at Lee’s clothing to give him the cue.

-Raposo was a fan of modern classical music, including that of Jean Sibelius.

-In addition to some of his non-Sesame work that we’re familiar with, like the Three’s Company theme song (which was sung by Muppet Show music consultant Ray Charles!), Raposo did some advertising work.  He wrote a song for Hydrox cookies, as well as a jingle for Dunkin’ Donuts emphasizing that their donuts are “Worth the trip.”  I believe I’ve found that one on YouTube:

As the event wound down, Nick Raposo talked about how proud he is of his father’s legacy and how the songs have lived on and been so beloved for all these years.  I think I can speak for Sesame Street fans everywhere when I say that feel lucky to have his timeless songs.

Thanks to Tough Pigs’ own Matthew Soberman for the event photo! Click here to do the (coo-coo) pigeon on the Tough Pigs forum!