Today’s article was brought to us by ToughPigs’ pal JD Hansel, author of the terrific @BadHensonBistro Twitter account! And now we’ll show you to your table.

Have you ever wondered what it would be like if there was a Muppet-themed restaurant?

That would be a weird thing to wonder since there are a few if you go to the right theme parks… but what if they went all in on Muppet theming? What if they let loose and went nuts?

This is what I asked when I started @BadHensonBistro, a Twitter account that operates as a kind of experimental fan art project. Every day, I posted a dish that might be on the menu of a Jim Henson-themed restaurant run by crazy people. I’ve never shared the full menu with everything on it… until now. Dramatic, no?

But first, let’s explore the building itself.

The outside isn’t much to speak of since the building is inflatable, just as Jim Henson would have wanted. The only signage is a giant fork in the road. Inside, however, the theming will astound you!

You can sit wherever you’d like – at a table, booth, or rolley – but reservations are required for Booth 68. Ask your server if you require a stool with a mirror under it to hide your performer.

Notice the monsters waiting tables and rats running food up and down the staircase where the baker will drop three birthday cakes, four root beer floats, five fancy fruitcakes, and so on forever until he dies. Take note of the Muppet pipes in the ceiling and the restrooms modeled after the cube, which is fitting since the food will keep you in there for a long, long time. The tables are covered in Jim’s doodles, and the napkins look like Yorick’s face cloths from “I’ve Grown Accustomed to Your Face,” which is a great reference because everyone will get it.

Now, let’s take a look at the menu, shall we? (Click the images to embiggen!)

It’s chaotic, stupid, and definitely unsafe, as any Muppet restaurant should be.

I tried to accommodate the different tastes of everyone from cereal girls to luncheon counter monsters. I also tried to show everyone who’s ever written for Miss Piggy that there are countless jokes you can make about eating that aren’t fat jokes. Hopefully I’ve at least succeeded in making you more aware of all the felt and fur they’re putting in our food these days. Remember when we ate natural foods like spring coats and ping pong balls??? Those were the days!

Part of the fun of doing this on Twitter was seeing other Muppet fans getting inspired to make their own Muppet food jokes (many of which made it onto the menu) and even to make their own fan art. I was particularly delighted to see fan art inspired by other fan art inspired by the menu. Most of the illustrations you see on the menu were drawn by the incredible Richard Michael Gomez (@StarmansArt). I commissioned an illustration of Pierre the French Rat from Richard to serve as the “mascot” in my attempt to parody PizzeRizzo. He surprised me with all the other lovely pieces seen in this article, which is just about the best surprise I’ve ever gotten.

Of course, there are so, so many references and jokes I could have made that didn’t make the final cut. Even some of the good ones I shared on the Twitter account just couldn’t fit on the page, and it was a shame to have to cut them. Maybe someday I’ll make an updated edition and swap out a few items, punch up the design, and somehow work Gladys the cafeteria lady in there. Until then, remember to tip your Stanley.

Thank you for dining with us!

Click here to enjoy margaritas at the midnight buffet on the ToughPigs forum! 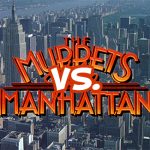 The Muppets vs. Manhattan 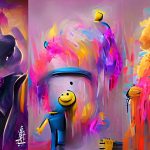