I’ll be totally honest with you; I’d essentially given up hope that we’d ever see the Fraggles again. The series went off the air in 1987, and since then the Fraggle Five had popped up in a few odd spots, but never anything substantial. There they were with Ben Folds, or advertising a Fraggle marathon for the old network The Hub. But I never really felt like The Fraggles were getting the love they deserved. Then there were rumours of a feature film, and let’s be honest – we all knew that was never going to happen!

So when the Fraggles turned up out of nowhere in 2020 for Fraggle Rock: Rock On, I was astounded. Suddenly there was a spike in interest in these old school characters, and leading the charge seemed to be puppeteer John Tartaglia, who’d been playing Gobo in his various appearances since 2013. Things felt different this time. They’d gone to the effort to rebuild some puppets, they’d done new props, and Johnny T seemed to be pushing things a lot faster than they ever seemed to before. Were the Fraggles back? It certainly looked possible, and when AppleTV announced a brand new series, I went into it with the same trepidation I had with any other Fraggle news. Let’s face it, I’d be burned before.

Yet things started happening, and puppeteers were flying to Canada, and instead of worrying IF this show was actually happening, I started wondering WHY this show was happening. These were beloved characters on a beloved show that was designed to stop war – could the new guys pull off that same vibe and refrain from anything that might date the show in 2 years time? Dave Goelz and Karen Prell were back, sure, but would Johnny T or Donna Kimball be able to play Gobo and Mokey in a long form series successfully?

I needn’t have worried. Because Fraggle Rock: Back To The Rock is wonderful. And it’s exactly what we need right now.

The show begins and immediately answers what I wanted to know – was this a reboot or a continuation of the original series? The answer is: reboot. This episode establishes that Gobo has never been into Outer Space, that Spocket has never seen a Fraggle before, and heck, no-one even knew who Marjory the Trash Heap was yet! This was probably a smart move, because a lot of people watching this will have never seen the original series, so a quick reintroduction is warranted. What’s nice is they get the vast majority of these out of the way in Episode 1, so the show isn’t bogged down in retracing it’s old steps and can get on to brand new stories.

What’s important is that this FEELS like the Fraggle Rock of old, but also feels fresh and new. The puppetry is astounding, the effects are amazing, and the scenery is gorgeous. The Fraggles feel like they used to, without feeling like they’re just carbon copies of their old selves. It’s nice to see Dave Goelz and Karen Prell back as Boober and Red respectively (plus, of course, Uncle Travelling Matt). It’s a nice bridge gap as we get our first proper taste of John Tartaglia, Donna Kimball and Jordan Lockhart as Gobo, Mokey and Wembley. All three prove within seconds that they’re the people for the job. I almost can’t tell the difference between Donna and Kathryn Mullen’s performances.

Episode 1 takes place as Uncle Travelling Matt is about to head off into Outer Space, and asks Gobo to join him. Unfortunately, Gobo is scared off by the monster that lurks behind the hole in the wall – Sprocket. In order to save face and prove that he’s brave enough, Gobo decides to head to the Crevice of Solitude, a dark and scary cave, to find his uncle’s backpack which was left there after a scare from a little creature. In doing so he and his friends cross paths with the Gorgs, Marjory, Philo and Gunge, all returning from the original series. Gobo recovers the backpack but causes a rock fall, and after finally figuring out how to get home, he decides to stay behind and explore Fraggle Rock with his pals. Nawwwww. We also meet the new Doc, played by the delightful Lilli Cooper.

You’re about to get an influx of reviews over the next few weeks from a bunch of us here at ToughPigs, with a wide range of views and opinions. I won’t bore you too much with mine just yet. All I’ll say this this;

This is a wonderful start to the series and it sets up all the characters nicely. Old fans can get themselves reaquainted before 12 more episodes, and new fans can introduce themselves to Gobo, Mokey, Wembly, Boober and Red before they start their journey through Fraggle Rock.

Weakest Moment: Who the hell is Pogey? And why are they all kind of dicks to him?

Classic Musical Moment: The series ends with the theme song, which is a nice way of welcoming people back to Fraggle Rock.

New Musical Moment: The series starts with a banger song, which is a nice way of welcoming people back to Fraggle Rock.

Coolest Puppetry Effect: The green screen is a heck of a lot better than it’s 80’s counterpart!

Darkest Moment: After Gobo causes the rockfall, Boober quips ‘This day just keeps getting worse – which I respect’.

Fraggle Lore: The whole thing reestablishes the Fraggle Lore, so I’m gonna have to say the entire thing fits!

One More Thing…: I really like the new look Mokey. I was ready to hate it, but damn, it just works.

Click here to say hi to Pogey on the ToughPigs forum! 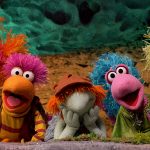