[ Danny’s note: Last week, I posted an extremely nasty and judgemental review of Animal Jam, which was characterized as “irresponsible and cruel” on the TP message board, but which was in fact entirely objective and well thought-out, so whatever. But then along comes Kynan B, the Tough Pigs Deputy Web Monkey, who likes Animal Jam, and he wrote this irresponsible and cruel response to my review. What’s worse, he insists that I actually post the damn thing, and he won’t stop poking at me until I do it. I finally agreed to post it, but only under the condition that I could add completely unrelated and distracting pictures. He agreed. ]

Now, I’m not going to attempt to make Danny change his mind about Animal Jam, because, hey, different strokes for different folks, everybody’s unique, and we’re all entitled to our own opinion. Plus, Danny’s a stubborn son of a bitch, and once his mind’s made up, there’s no talking to the guy. But the fact is, he’s got no good reason for disliking the show.

First off, let’s put our cards on the table, in the name of ethical journalism. [Danny’s note: Ha.] There are a number of factors at play which tend to skew my reviews from Danny’s. [Danny’s note: Mine make sense.] One might seem self-evident for regular Tough Pigs readers, but it’s still worth pointing out for those of you who are tuning in for the first time. As Deputy Web Monkey, I’m an optimistic, bright-eyed little puppy of a viewer, and I watch Muppet shows because I really enjoy those durned Muppets, and I only have to write for Tough Pigs when I feel like it. But as Chief Web Monkey, Danny has to write updates nearly every day, so every show he watches becomes fodder to feed the hordes of demanding Bad-Ass TP readers. Plus, working so much harder than I do makes him tired and resentful.

Factor Two: I live in Australia, which means two things: (A) Because I don’t have access to Discovery Kids, my review is based on a preview tape, so I’m watching three episodes out of broadcast order, instead of the first broadcast show which Danny trashed. And (B) Australia is located in the southern hemisphere, so the blood rushes to our heads, making us smarter.

Okay, you ready to Jam? DJs 3, 2, 1 — go! Danny’s first complaint is that Animal Jam is low-budget, as if economy of scale were somehow an indicator of lack of quality. I’m not sure how adding extra sets or having dollar bills fluttering down from the ceiling would improve the show, but let’s look at the facts here. The show takes place on one set, using half a dozen puppets and some archival footage. This might signal Low-Budget Knockoff to your average Media Critboy, but are the production values actually that low? Does the set wobble like cardboard? Do the puppets come apart at the seams mid-song? Do the shots wander round wildly, as if unpaid interns were running the cameras? And hey, didn’t Bear in the Big Blue House also start out with half a dozen puppets on one set? [Danny’s note: Not really. Bear started out with eight puppets on at least six sets.]

Danny then goes on to describe the set as “kind of disorienting,” a characterization which I reject because my sharp, blood-filled Australian brain has managed to decode the flashing lights and figure out the studio layout after just one episode. It’s a dance show. Images, lights, and kids dancing are pretty much par for the course.

Danny takes a few other liberties with the language, employing a use of the word “shouting” which encompasses perfectly regular speech. In the three episodes I watched, not one character shouted at me. Sure, they spoke, they laughed, and they even occasionally sang actual songs, but nobody went what I would describe as all Chris Rock on my ass. As I said earlier, I’m watching different episodes from Danny, so it’s possible that in the first show, all the characters did shout in an entirely unsettling fashion, and the producers got together and decided that they should fire the dialogue coaches, Bobcat Goldthwait and Gilbert Gottfried. It’s also possible that Danny was using the time-tested media crit technique called “lying,” desperately clawing for a critical foothold on a slope where none exists. Let’s give him the benefit of the doubt, out of respect for his aging and senile mind. [Danny’s note: How are you enjoying the distracting pictures?]

It pains me to say that Danny spends not one, not three, but four meandering paragraphs swatting feebly at the concept of “interactive” TV. His point, primitive and blunt though it may be, is apparently that TV interactivity is one-way and consequently pointless. This is the egotist as critic — basically, Danny is railing impotently against the cruel twist of fate which prevents him from being able to kill TV characters through cranky willpower alone. “If they can tell me what to do,” he reasons (and here I use the word “reason” in the same sense that Danny uses the word “shouting” — ie, in a completely made-up and untrue sense), “then I should be able to tell them what to do, even to the point of making their heads explode with my mind.”

I’m not even going to point out that fruitless activity which utterly fails to impact on the results of TV programs is actually what Danny spends his whole life doing — see “My Empty Existence Criticizing a Now-Defunct Unwatched Sci-Fi Show.” I’m just going to point out that kids’ TV has always fallen into one of two genres — the drama genre, where stuff happens and characters talk to each other, and the people talking at you from inside the magic box genre, where characters do things and invite the viewer to join in. It’s a long-established educational technique. Sesame Street does it. Bear in the Big Blue House does it. It is, of course, completely up to the viewer whether to participate or just watch, and Danny, like all critics, chooses the latter, rather than expose himself to the squealing mockery of DJ3 should his Big Body Goodbye not be up to scratch.

For all his frothing and ranting, Danny does make some salient points about the first episode, and like any quality show, the series improves over time. The characters do spend more time interacting with the in-studio kids (although not to the detriment of the home viewers, who, after all, are the real audience), and the —

Oops, here comes Bozark. He’s unpredictable in that way. Let’s watch him dance a while. Danny made some nice comments about Bozark, who deserved them, although no 9 foot tall dancing elephant deserves Danny’s begrudging, backhanded tone. Bozark was one of the last great innovations of the New York Muppet Workshop before it became the New York Muppet Basement. Lighter than any comparable full-body costume, it allows suit performer David Maida an extraordinary range of physical motion. (You know what that means, of course — yep, a production budget well-spent.)

Danny saves his big body-blow for the final round, accusing the characters of being unengaging. Again, I must remind you that I have the artillery advantage here, because I’ve got three later episodes at my disposal, whereas Danny is basing his sweeping series dismissal on the first broadcast episode. (First episodes are critically renowned for showcasing full character development. As evidence, I refer you to the first episode of The Muppet Show, in which we are introduced to the classic character Miss Piggy Lee, a drag queen with a deep, resonant falsetto, performed in operatic style by Richard Hunt.) 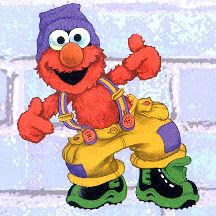 Excuse me, I’m just looking through my notes here to see what Danny had to say about the characters. Hmm… characters, characters. With you in a moment… Nope, all I can find is a bunch of crap about the puppets’ eyes. Apparently they’ve all got black beady eyes, which makes them impossible to love. You know, like Pip and Pop. No, that’s not right. More like Bear. Or am I thinking of the Emmet Otter cast? That can’t possibly be right, they’re such likeable characters. I guess Bunsen, Boober Fraggle and Sully would be bad examples, too — being, as they are, well-rounded, well-loved characters with no eyes at all. Okay, I’ll have to leave the beady-eye argument unrefuted. You win this round, Danny. You and your pal Slimey the Worm.

But sadly, I will have to concede that Danny is spot-on in his main argument. Now is not a good time for the Jim Henson Company. When a quality, innovative show like Animal Jam is reviewed by the most prose-heavy Muppet fan site as if it’s some kind of horrific nightmare — Animal ‘Nam if you will — then these are dark times indeed. When adorable, funny characters like Waffle, the funniest monkey outside of the Fiama residence, and Edie, the spunkiest girl on TV, are so casually dismissed after a single episode, then yes, now is a bad time for Henson to try something new.