Animal and Miss Piggy Now Available in Disney Heroes: Battle Mode, Whatever That Is 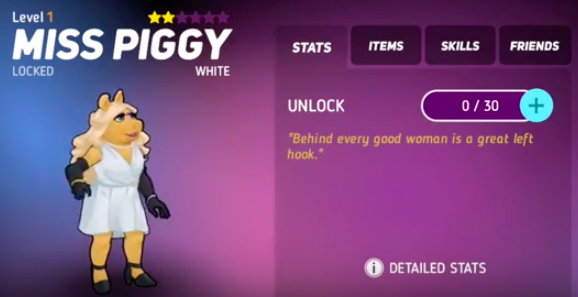 Until just now, I had never heard of the mobile game Disney Heroes: Battle Mode.  According to the Disney Fandom Wiki, it’s “a crossover mobile role-playing game available for iOS and Android devices.” As far as I can tell, it allows players to finally find out what would happen if Judy Hopps from Zootopia got in a knock-down, drag-out street brawl with Aladdin.

Among other Disney-owned characters, you can also unlock two Muppets: Animal and Miss Piggy. Per their descriptions in the game, “Animal fills the battlefield with upbeats and beatdowns, boosting allies and damaging foes” and “Miss Piggy puts the enemy in their place with her stunning karate moves.”

So much violence in a Muppet game! What about the impressionable children playing this thing?

Anyway, you can see some game footage that includes the two Muppets here:

And according to that Disney wiki, Gonzo may be added to the game at some point.

Have fun battling! And if anyone out there can explain this game to me, please do.

Special thanks to vigilant Tough Pigs reader Robert Poole for the alert! Click here to attack Emperor Zurg with an awesome drum solo on the Tough Pigs forum!