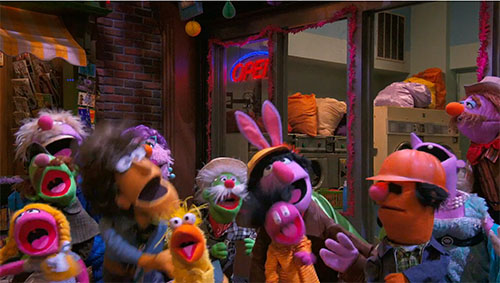 If you’ve watched Sesame Street’s 50th Anniversary Celebration, you were probably agog with all the amazing Easter eggs and cameos throughout the special.  And if you were anything like me, you were wearing out your pause button trying to spot them all.

Now that it’s premiered on both HBO and PBS (and for a limited time, it’s also available online!), it’s a perfect time to look back at all of those wonderful Muppet cameos.  There are a lot more than just Muppets – current and former cast members, celebrities, and Muppet performers also pop up throughout the special.  Make sure you pay close attention for all of those on your next viewing!

So without further ado, here’s our (mostly arbitrary) ranking of all the cameos featuring obscure, forgotten, retired, and otherwise notable Muppets! 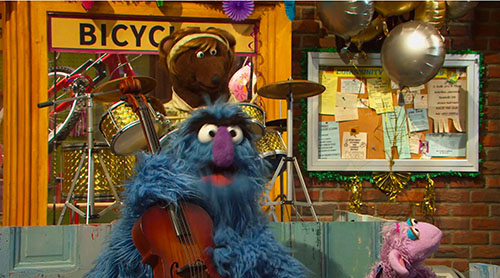 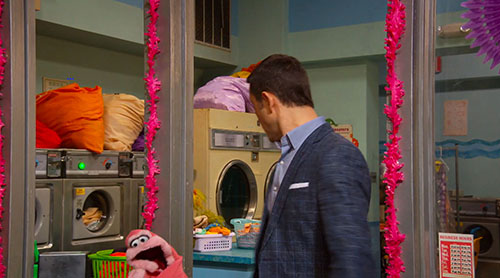 A sentient piece of clothing previously seen in an Elmo’s World episode comes out of the laundromat, presumably washed and tumble dried. 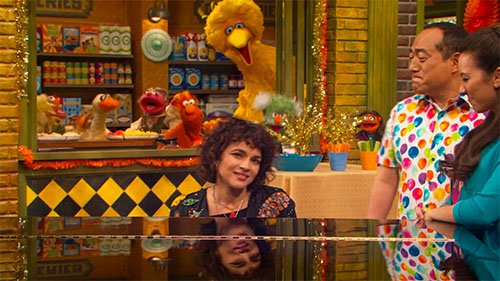 The fairy tale litterbugs can be seen in Hooper’s Store doing what they’re best known for: Throwing bread all over the dang place. 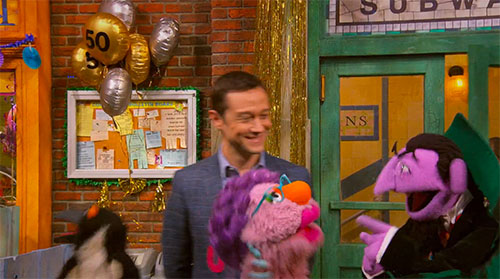 The former owner of the Furry Arms Hotel bops past the screen, and it’s nice to see that she hasn’t changed her already-dated-in-1993 style. 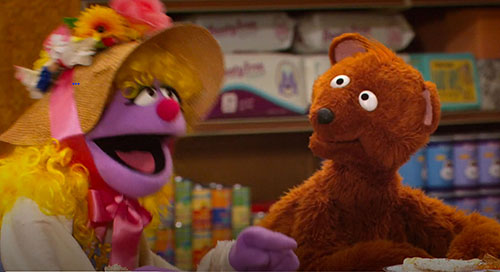 It’s weird to think of Baby Bear as a legacy character, but he doesn’t show up on Sesame Street so much anymore.  But he’s still hanging out in Hooper’s Store, being annoyed by Goldilocks. 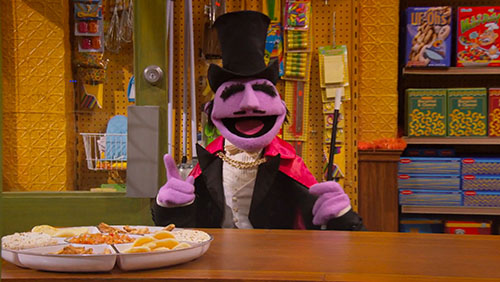 What a magical appearance by Mumford! A la peanut butter sandwiches! 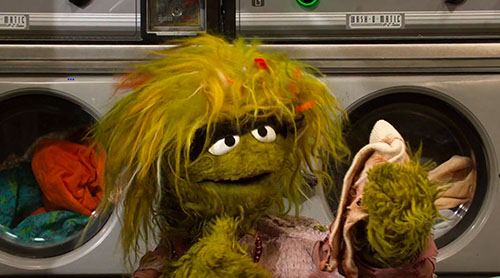 Grundgetta makes reference to having been around (to lose a sock) decades ago.  Is she the only Muppet actually confirming her age in this special? 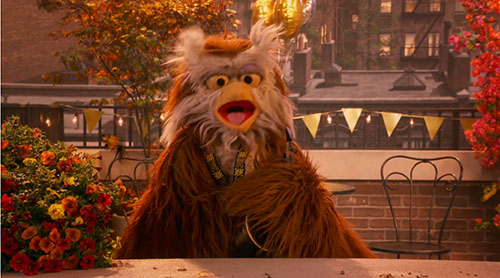 Hoots is back, and sounding amazing thanks to his new performer Christopher Hayes. 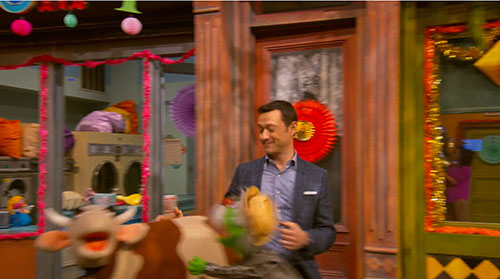 This whole special could’ve been about Gladys the Cow and I would’ve been one happy Muppet fan. 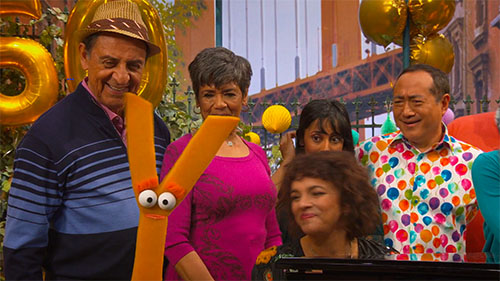 The letter Y from the 2004 song “Don’t Know Y” reunites with Norah Jones, and he hasn’t aged a day. 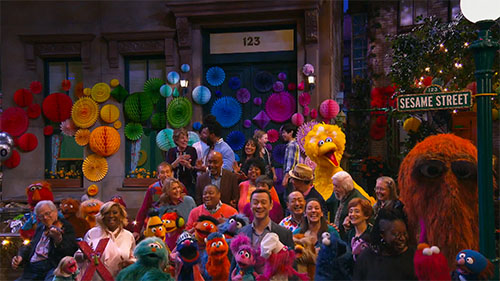 Likewise, the letter X from Patti LaBelle’s “Oh, How I Miss My X” pops up during the final number.  I like to assume that he’s not LaBelle’s X anymore, but her current love.  I ship them. 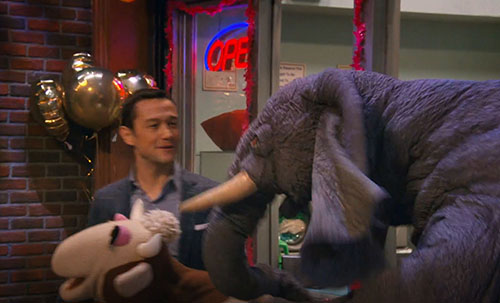 Horatio is the greatest two-ton Muppet on Sesame Street. 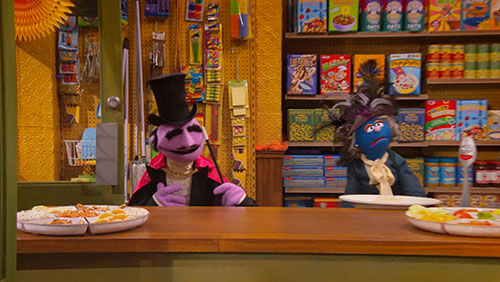 Mrs. Crustworthy is on the Street for the big 50th anniversary, representing the extended membership of the greater Toast Lovers’ Society. 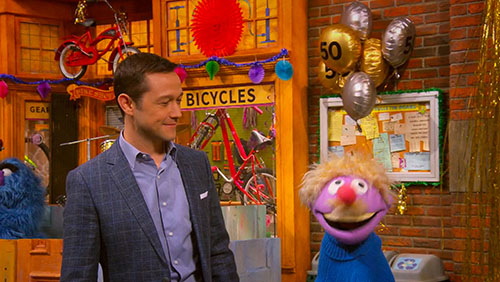 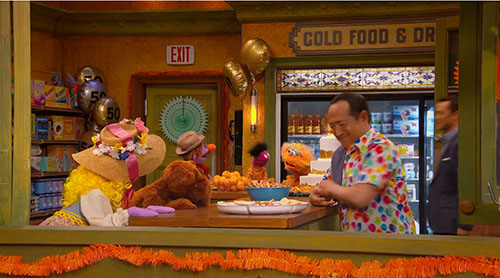 Two more vintage characters are hanging out in Hooper’s: Roosevelt Franklin (dancing to a song only he can hear) and Forgetful Jones (who, naturally, can’t remember Joseph Gordon-Levitt’s name).  Classic, and classic. 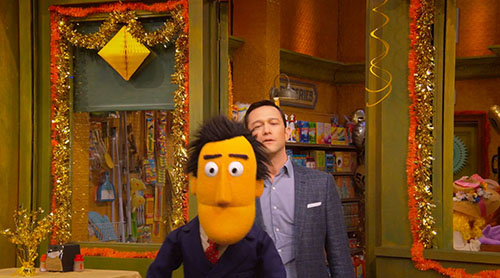 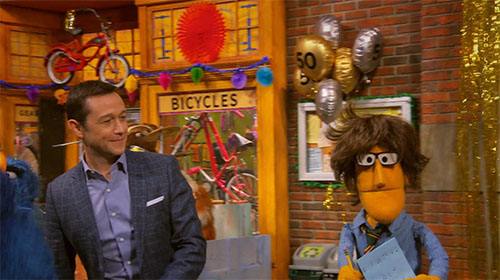 Oh hey, it’s Guy Smiley!  (…I may have gotten those a little wrong.) 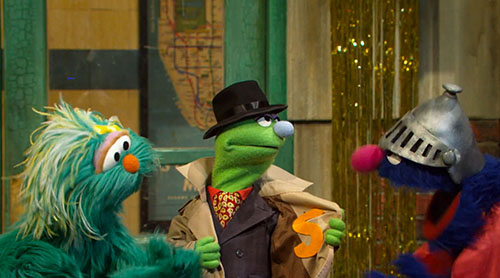 Quite possibly the most problematic retired Sesame Street character, the infamous grifter is back, shady as ever. 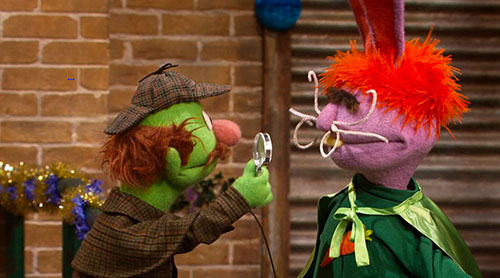 Ah yes, the World’s Greatest Detective and the Rabbit of Steel.  That’s a World’s Finest I can get behind!

They made background cameos in the special, but all my screenshots look like garbage.  So here they are along with some of their fellow classic Muppets in a group scene!  Swaying back and forth like they’ve been doing it for five decades. 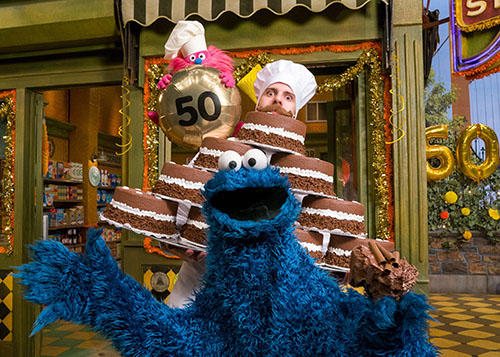 Not technically a Muppet, but the clumsy Baker is still voiced by Jim Henson, so I’m putting him on this list.  Just try and stop me. 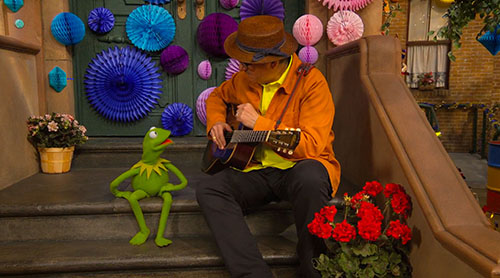 Was there any other option for our #1 pick?  It was downright emotional seeing Kermit back home on Sesame Street.  Just look at him sitting on the stoop.  He may be the property of the Walt Disney Company, but he belongs here.

Did we miss any Muppets?  Did you miss any?  Keep an eye out for all these faves and more on your next viewing of Sesame Street’s 50th Anniversary Celebration!!

Click here to get those Anything Muppets confused on the ToughPigs forum!