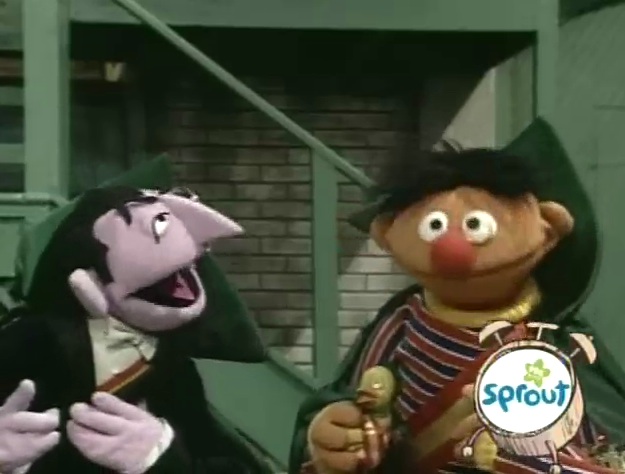 It’s season 31, and it sure is nice to see Ernie on Sesame Street again.

Not that Ernie had been completely absent from Sesame Street, the TV show. A few years after Jim Henson’s passing, Steve Whitmire took over the character for some occasional inserts. But in this season, Ernie appears on Sesame Street, the street, starring in no fewer than four street stories. When was the last time Ernie was the major character of a street story, even when Jim Henson was still around? I wouldn’t be surprised if it was before The Muppet Show started!

But now here’s Ernie, hanging out on the street and interacting with Muppets and humans alike. In episode 3873, he and Rubber Duckie enthusiastically join Big Bird’s Birdketeers club, only to hijack it and turn it into the Ducketeers. In episode 3888, Rosita tries to teach Ernie about charro (Mexican cowboy) culture, but Ernie won’t get off his horse and stop acting like a fool long enough to listen to her. 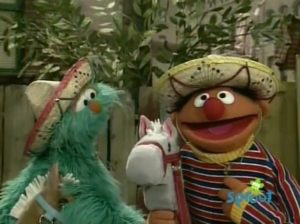 In episode 3909, Ernie takes over the Count’s important counting duties for the day, and drives Gina crazy counting every page in her textbook. And in episode 3913, Ernie sleeps over at Big Bird’s, depriving Gordon of sleep with his frequent requests.

I find it interesting that Bert doesn’t appear in any of these street scenes, so Ernie finds other people to annoy incessantly instead. He just can’t help himself. Across the years, after passing from one puppeteer to another, in a new era of the show, and without his best buddy, Ernie remains dedicated to his purpose of being gleefully obnoxious. It’s quite comforting. To us, anyway. Maybe less so to Big Bird and Rosita and Gina and Gordon. 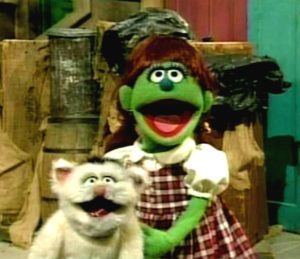 MVM (Most Valuable Muppet): If you know me well enough to be familiar with my opinions regarding short-lived, early-00s Sesame Street characters, you already know I’m a fan of Elizabeth, a Stephanie D’Abruzzo-performed Muppet who shows up a handful of times this season in both street stories and inserts. She may not be the most merchandisable Muppet, but it’s always fun seeing her… and her cat, Little Murray Sparkles(!), who makes his debut this season.

Notable Character Debut: Another Stephanie D’Abruzzo character, Lulu the monster, makes her first appearance in an episode about Telly taking some monster kids on a field trip. It also gives us our first glimpse of the Monster Clubhouse, which would later become the location of a recurring segment.

MVH (Most Valuable Human): Luis pops up in a lot of street stories this season, helping Lulu get over her fear of shaking hands, assisting Big Bird with his search for his missing teddy bear, and so on. He’s a good dude, that Luis. I also want to nod in the general direction of Gabi and Miles, who have previously fallen into the “kids” category, but are now being written more like the adult cast members. The youngsters are growing up! 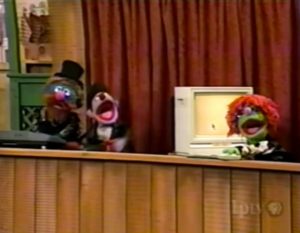 MVE (Most Valuable Episode): In episode 3898, Jerry and the Monotones do a concert on Sesame Street. It’s always great to see those guys! The performance inspires Big Bird, Elmo, Prairie Dawn and Snuffy to start a band of their own. Prairie Dawn should be mentioned alongside Elton John and Ben Folds in any conversation about great rock pianists.

Other Notable Episodes: In episode 3891, Oscar the Grouch is visited by his surprisingly neat and tidy cousin Felix. Is it possible this was the first time they did the “Oscar and Felix” joke?! (It’s a reference to The Odd Couple!)

Curriculum Focus: It includes “children getting along in their world,” with what Muppet Wiki refers to as a focus on “conflict resolution, entering social groups and understanding feelings.” All of  which sounds a lot like a precursor to today’s “smarter, stronger, kinder” mission statement.

Musical Highlight: I enjoyed “Be the Count,” performed by Ernie and the Count, which is a riff on the old musical standard “Be a Clown.” Not to mention the Squirrel Nut Zippers, frustrating Mr. Johnson with a ridiculous rendition of their hit “Put a Lid on It.”

WTF Moment: In episode 3860, Telly is concerned because his hamster Chuckie isn’t moving. No, it’s not an episode about how to deal with the death of a pet — it’s an episode about how sometimes the hamster you thought was a boy is actually a girl and is pregnant and is about to have babies! 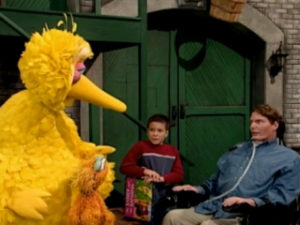 Best Celebrity Moment: It’s hard to top Spike Lee in “Summer of Snuffy,” in which the director has to show Snuffy how to act sad. Especially considering the title is a riff on Lee’s movie about a serial killer. But I’m going to have to give this season’s Best Celebrity Moments to Christopher Reeve, who not only says the alphabet with Ernie, he also patiently explains his wheelchair to Big Bird and Zoe. It’s a segment that should be included in any reel of “Sesame Street helping kids understand tough issues.”

One More Thing: In this period of the show, the writers (or the producers? or the researchers?) are really into doing the thing where the street stories lead into the inserts. Like, say, Big Bird asks Alan if he’s ever seen a scuba-diving camel, and then Alan is like, “Here, watch this!” and the show cuts to a film about a scuba-diving camel. I don’t that exact example ever happened, but you get the idea. The show hadn’t done this since the earliest years, but somebody must have decided it was a good idea again.

Okay, One More Thing: It seems like Ernie never appears without his Rubber Duckie in his appearances around this time. I know the guy loves his duck, but during the Jim Henson days, they weren’t quite so inseparable, were they?