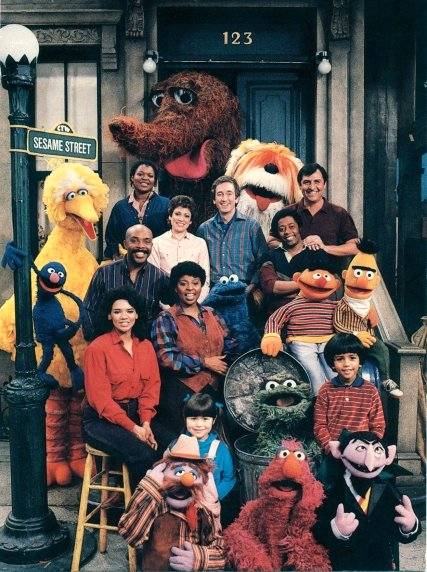 A newspaper article cited in Muppet Wiki’s article on Sesame Street’s 16th season notes that, as in the previous season, viewers can expect to see segments featuring computers. This is right around the time I started watching the show as a youngster, which means Sesame Street helped me learn about computers. But I had no idea that, years later, computers would help me learn about Sesame Street.

Many of my earliest television memories are from this show. But the thing about preschool-age memories is that they’re not that sharp. Years after my original Sesame Street viewing phase, I vaguely recalled a teenage boy character who lived on Sesame Street. He had long since departed from the cast, but I recalled him being a pretty regular presence at one time. I knew two things about him: 1) He was a breakdancer, which was a cool thing at the time, and 2) He knew sign language, which enabled him to converse with Linda.

I may have thought about this kid occasionally when I thought about Sesame Street as I got older. But I had no reason to believe I would ever actually find out more about him, or meet anyone else who remembered him like I did. 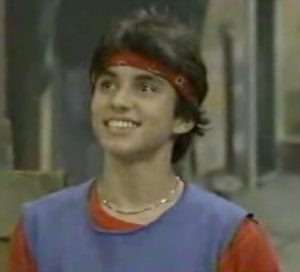 But in the late ‘90s and early ‘00s, I connected with other fans online, and eventually asked if anyone knew about the mystery breakdancing teenager. And somebody did! A fellow fan said yes, that teenage character existed, he was really into breakdancing, and his name was probably Petey.

You know where I’m going with this. Today we have Muppet Wiki, and we have thousands of fan uploads of clips and episodes to YouTube, and there’s more info available than we ever could have hoped for. It’s a golden age of sunny days.

Which is how I now know that the breakdancing teenager was introduced in season 16, and his name was actually Piri, and he had a dog named Cool, and he was played by a young actor named Eddie Castrodad. Not only that, I can type some words on a computer and within seconds, I can watch videos from Sesame Street featuring Piri!

That includes Episode 2059, in which Bob asks Piri for some breakdancing pointers because he wants to impress Linda. Why does Bob think Linda wants to see him breakdancing? I have no idea, but although Bob’s smooth moves do not impress Linda, they’re a hoot to watch. If only he had taken it a step further and tried to spin on his head. 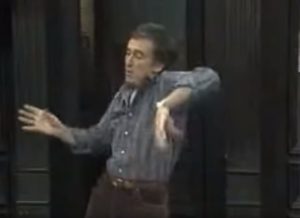 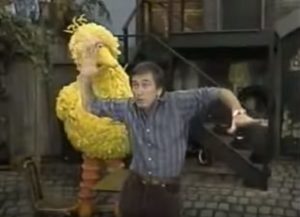 A few days later, in Episode 2062, Piri leads a group of talented kids in what Telly mistakes for a “big breakfast,” which turns out to be a “break-fest.” It’s a breakdancing festival, y’all! It’s fun to see Sesame Street explore breakdancing like this. They had embraced disco so whole-heartedly in the ‘70s, and the producers were savvy enough to realize that they had to keep up with American culture.  A 16-year-old show for young people has to stay fresh.

Now, of course, all this once-fresh stuff is way in the past. Piri’s debut was 35 years ago! But thanks to these amazing computers we have (including the little one I carry I my pocket), I can see him hang out with Big Bird and the gang any time. If I were more coordinated, I could even watch a tutorial video on my computer to teach myself to breakdance. Alas, I’ll always be more of a Bob than a Piri. 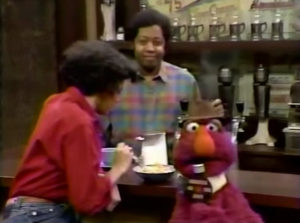 MVM (Most Valuable Muppet): Telly has become a valuable player in street stories, and this year Martin P. Robinson assumes the role after Brian Meehl’s departure, and makes Telly his own.

MVH (Most Valuable Human): David, just because he always seems like such a fun dude to hang out with.

MVE (Most Valuable Episode): In Episode 1966, after years of openly mocking Big Bird, grown-ups Maria, Gordon, and Linda finally take his word for it and accept that there is such a thing as a Snuffleupagus. But they won’t meet him this season… and the other grown-ups are still Snuffleupagnostics, so Big Bird will have to be frustrated for a while longer.

Other Notable Episodes: Episode 2018 features a street scene with a little red monster, whose name is now Elmo. He’s performed by Richard Hunt here, but he’ll soon be ready for his rise to stardom with the assistance of Kevin Clash.

Classic Song Debut: “That’s What Friends Are For,” in which Ernie keeps Bert awake by singing about the fact that even though Bert likes a lot of things Ernie doesn’t like, Ernie doesn’t mind. Bert does mind being kept awake. Also Kermit’s “Do Op Hop.” I’ll never understand why the official title isn’t spelled “Do Wop Hop,” but it sure is a catchy song to sing while hopping.

Curriculum Focus: Computers, and also hospitals. And just think, these days they have computers in hospitals! How far we’ve come! 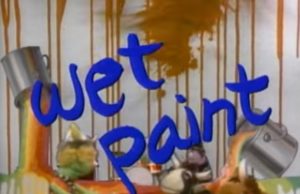 Musical Highlight: How Now Brown and the Moo Wave drop their hit music video “Wet Paint.” Look at Sesame Street, keeping up with the MTV generation! I’ve heard some kids were frightened by this video and its extreme closeups of dripping paint. Were you one of those kids?

Best Celebrity Moment: Jane Curtin showed up as Cinderella. The highlight of her appearance was this sketch where she pals around with the Two-Headed Monster.

One More Thing: This one actually premiered in season 15, but I just want to mention the “Love Boat” spoof. It doesn’t really resemble the TV series, and I’m skeptical about how effectively it teaches the concept of love, but it makes me laugh. A lot.

Okay, One More Thing: Did you know there was a human character named Miss Trump who appeared occasionally around this time? She was a sweet older lady who hung out with Bob’s Uncle Wally, got her radio repaired at the Fix-It Shop, and showed Piri how to dance the waltz. Of course, in 1984 the name “Trump” had yet to be irrevocably tainted forever.

Click here to electric boogaloo on the Tough Pigs forum!