Welcome back to another rousing session of Fraggle Rock comic book Q&As! Once again, we are streeeetching the definition of “My Week” with the tail end of interviews with the creative teams behind the stories in the current Fraggle Rock miniseries.

Today, we’re chatting with writer Katie Strickland and artist Lindsay Cibos, the creative team behind the “Shopping with Silly Creatures” story. There’s literally nothing else I can tell you here. Read on, True Believers! 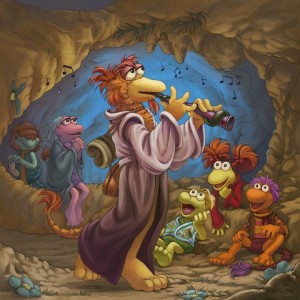 Katie Strickland: Like a lot of people, I have been a fan of the Fraggles ever since I was a child. I still have the Doozer storybooks and a well-worn 45 with the Fraggles theme song. I spent many hours listening to that record, dancing my cares away.

What I enjoy most about being a Fraggle fan today is being able to share it with my kids. It is rare to find something that stands the test of time, in content and appearance, the way Fraggle Rock has and I think it is great seeing them get this new life through comic books.

TP: What sort of research did you do in preparation to write for the Fraggle Rock universe?

KS: For the most part, my research consisted of sitting on my couch watching hours of Fraggle Rock with my kids. I have the best job ever!

In particular though, I spent time listening to the way each character talks and noting their mannerisms. It was all about staying true to who the Fraggles are and hopefully I managed to capture that in my writing.

KS: It boils down to being in the right place at the right time.

I attended San Diego Comic-Con last year to celebrate the release of Fraggle Rock Vol. 1 with my dearest friend, Heather Nuhfer, who wrote the lead story for issue #1 (as Heather White) and she introduced me to some of the great folks at the Archaia booth.

Later in the week Tim Beedle handed me his card and asked me to submit some ideas of my own. There is so much talent associated with Archaia, it was intimidating being asked to join them, but I spent the plane ride home brainstorming and a few weeks later had my story approved. 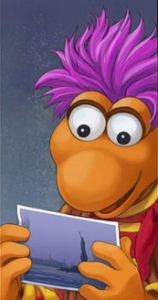 TP: From what we can tell, you?¢‚Ç¨‚Ñ¢re relatively new to the world of comic book writing. How does it feel to start out with such a high-profile property?

KS: Yes, this was my first venture in comic book writing and what a way to start. It has been a bit surreal working on a property that I have loved so long and have so much respect for, but, at the same time, that it was has made it so much fun.

I was very passionate about this project and I hope that shows for all the other fans out there.

I know what a rare opportunity this is and I am very thankful to Archaia and The Jim Henson Company for allowing me to be part of something so special.

KS: Wembley has always been my favorite Fraggle and re-watching the show as an adult I think I understand why. He is quirky, indecisive and loves Doozers?¢‚Ç¨¬¶basically, he is me!

I know it sounds like a cop-out, but I cannot think of a least favorite. I think all the characters bring their own special something to the world of Fraggle Rock and that is part of the reason why so many people can connect to it.

TP: Which characters have been the most difficult to write for?

KS: My story features Travelling Matt, but I actually think Boober was the most difficult to write for. He is only in a few snippets, but I spent a lot of time revising those few lines. Capturing just the right amount of Boober?¢‚Ç¨‚Ñ¢s bleaker disposition was trickier than I expected.

KS: My experience with Archaia and The Jim Henson Company has been such a positive one. They have been very supportive and willing to answer any questions I?¢‚Ç¨‚Ñ¢ve had about the comic book process. Their response to my story was very enthusiastic and, as a writer, I don?¢‚Ç¨‚Ñ¢t think it gets any better than that. 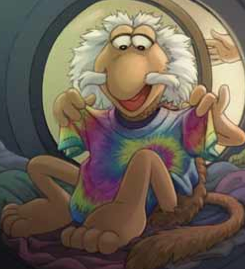 KS: I love Travelling Matt?¢‚Ç¨‚Ñ¢s adventurous and wide-eyed approach to the world, even when he stumbles across something as mundane as a laundry mat. My story explores the dizzying excitement a Fraggle can have there while ?¢‚Ç¨?ìShopping with Silly Creatures.?¢‚Ç¨¬ù

TP: If you had to play tour guide for Traveling Matt for a day, where would you take him?

KS: Well, I live in Pennsylvania so thinking locally I would have to say the Carnegie Museums of Art and Natural History in Pittsburgh. There is so much to see and explore there that I think he would consider it a great adventure. I would have a lot of fun too, listening to his thoughts on the fine art found here in ?¢‚Ç¨?ìOuter Space,?¢‚Ç¨¬ù not to mention all the dinosaur bones.

KS: I recently started a blog, Leaf on the Wind, which can be found here at http://katiestrickland.blogspot.com/

I’ll admit, there isn?¢‚Ç¨‚Ñ¢t much to it right now, but stay tuned because I have several original projects that I am preparing to post.

KS: I hope everyone enjoys reading this issue as much as I enjoyed writing it. Thank you all for your support!

Thank you, Tough Pigs. It was great getting to share my experience with all of you! 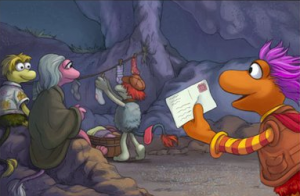 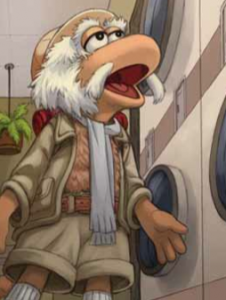 Lindsay Cibos: As a child of the ?¢‚Ç¨‚Ñ¢80s, I grew up watching ?¢‚Ç¨?ìFraggle Rock.?¢‚Ç¨¬ù I don?¢‚Ç¨‚Ñ¢t recall having access to the show at my parent?¢‚Ç¨‚Ñ¢s house, but my cousin?¢‚Ç¨‚Ñ¢s family had HBO (which is where the show originally aired), so whenever I stayed over at her place, we watched it together. My cousin, by the way, is Chandra Free, who illustrated a story in the last issue of Fraggle Rock. 😉

As for nowadays, I?¢‚Ç¨‚Ñ¢m still a fan. When the Season One Box Set DVDs came out, I grabbed it up immediately. I was happy to find that the show was just as good as I remembered it (not something you can say about every kid?¢‚Ç¨‚Ñ¢s show from the?¢‚Ç¨‚Ñ¢80s). The masterful puppetry and fun characters aside, the writing in ?¢‚Ç¨?ìFraggles?¢‚Ç¨¬ù is clever, and has depth and sophistication that allows it to work on both a kid and adult level.

The Henson Company also provided me with access to a bunch of high-quality stills of the characters from multiple angles, which was incredibly helpful for getting the details just right.

Also, since my story takes place in the real world, I took a Travelling Matt-like study trip to a local laundromat. 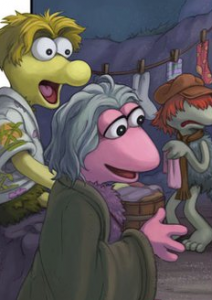 LC: When I saw Archaia editor Tim Beedle mention online that he was looking for more artists for the Fraggles, I jumped at the opportunity. He was already familiar with the work I did for Tokyopop, and liked the recent color comic work I was doing on my web comic, The Last of the Polar Bears, so he invited me to submit some sketches of the characters.

TP: You co-created the how-to draw book ?¢‚Ç¨?ìDraw Furries: How to Create Anthropomorphic and Fantasy Animals.?¢‚Ç¨¬ù Did you use any of these methods when illustrating the Fraggles?
LC: Yes – my approach to drawing any character is to build up the form from basic shapes, and then refine with details once the structure is solid. This works for me whether I?¢‚Ç¨‚Ñ¢ve drawing people or animals, but it?¢‚Ç¨‚Ñ¢s especially practical with the Fraggles, since their forms are very ?¢‚Ç¨?ìshape-y.?¢‚Ç¨¬ù

LC: Boober is my favorite. He?¢‚Ç¨‚Ñ¢s just so focused and so pessimistic about everything. Everything that comes out of his mouth is hilarious. I also adore Mokey – the artistic dreamer, I can relate. 🙂 Least favorite is too hard to answer. They?¢‚Ç¨‚Ñ¢re all so fun, I love all of them.

LC: Not difficult, per se, but the Gorg?¢‚Ç¨‚Ñ¢s unusual proportions and extra fur and clothing details make them a little bit trickier than the other characters. Also – Travelling Matt and Cantus, with their supplies and layered clothing, are some of the more complicated Fraggles to draw. 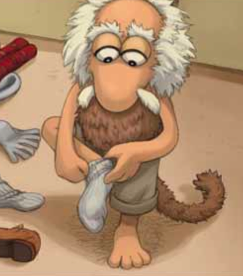 LC: I?¢‚Ç¨‚Ñ¢m happy to report that the response from both has been extremely positive! Working Tim Beedle and the Jim Henson Company has been a great experience. Tim is a fantastic editor, and has been extremely helpful during the entire process.

TP: Why do you think it is that no one ever bothers to help Travelling Matt when they see him bumbling around ?¢‚Ç¨?ìOuter Space?¢‚Ç¨¬ù?

LC: Nobody wants to get involved with the awkward looking tourist? 🙂

LC: I have a web comic called The Last of the Polar Bears at: http://www.lastpolarbears.com/

You can see more of my artwork on my website here: http://jaredandlindsay.com/

LC: Dance your cares away, worry?¢‚Ç¨‚Ñ¢s for another day. Let the music play, down at Fraggle Rock! 🙂 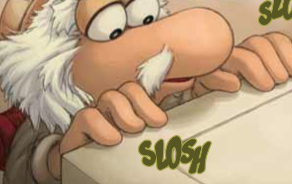 Many thanks to Katie Strickland and Lindsay Cibos for agreeing to chat with us and for all your hard work on the Fraggle Rock comic book!

Click here to dry clean your Fraggles on the ToughPigs forum!