NOTE: Keep reading to the end of this article for the AUDIO SAMPLE portion! Wow! 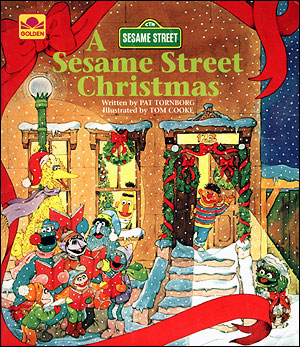 I have lots of fond memories from Christmastime during my childhood. Watching animated TV specials, eating Chex Muddy Buddies, singing “We Three Kings” with the hilarious “rubber cigar” parody lyrics… And then there was A Sesame Street Christmas, a book written by Pat Tornborg and illustrated by Tom Cooke that I had to have read to me every December until I learned to read it all by myself, which was about three years ago. I knew I wanted to talk about it as part of this 12-part Christmas series we”re doing here on Tough Pigs, so I ordered a copy from an Amazon seller, and eagerly dove into it… only to realize that I remembered practically nothing about it.

But that’s okay. That makes it like a brand new Sesame Street book, and that’s a pretty great Christmas present. There’s not much of a story here; it’s just a collection of Christmas-themed vignettes starring all our favorite Sesame Street pals, and Betty Lou. First up is “The Night Before Christmas on Sesame Street,” but it’s not the jazzy one David performed on the Merry Christmas From Sesame Street LP, it’s a completely different story about the year a storm almost prevented Santa from making his rounds, so Mumford the Magician filled in for him.

There are a lot of Christmas stories for kids out there, and that seems to be a favorite device for writers looking for a premise — have your character help Santa do his job. Ernest P. Worrell did it admirably, of course, and even Pee-wee Herman took a turn riding in the sleigh. But Mumford’s not that good at it… Basically, he’s as good at playing Santa as he is at successfully performing magic tricks. Big Bird ends up with size-three sneakers, Bert gets Rubber Duckie’s soapdish… and I can only imagine the hilarity that occurred when Mr. Hooper found Susan’s brassieres under his tree. Oh, but wait! The real Santa Claus himself was following one step behind Mumford the whole time, correcting his mistakes. Yay, he saved Christmas! Santa is the best Santa of all. 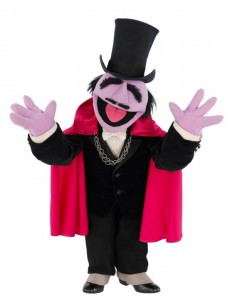 The next story isn’t really a story at all, it’s just an excuse to reproduce the lyrics of Oscar’s fantastic anti-holiday song “I Hate Christmas.” See, Oscar’s all excited to be reading this great story about this grouchy guy named Scrooge… but then Big Bird and Betty Lou ruin it for him by telling him that the story has a happy ending with Scrooge changing his mind about Christmas. I was fully expecting yet another retelling of A Christmas Carol here, but not only does Pat Tornborg spare us, she even lets Oscar get the last word in the story! That’s right, there’s no moral. He gets to keep being grouchy!

As the final story begins, “everyone on Sesame Street” gathers together for a Christmas-present-wrapping party, which is very nearly derailed when it turns out nobody brought any wrapping paper or ribbons. Fortunately, Oscar’s crappy wrapping job provides the inspiration: They can just use junk they find around the house to wrap presents in! So they wrap their gifts in newspapers, catalogs, aluminum foil, filthy birdseed bags, and presumably old, shed Snuffleupagus fur. Then it starts snowing outside, so the whole gang goes Christmas caroling outside Bert and Ernie’s window, which probably makes Bert and Ernie wonder why they weren’t among the “everyone” invited to the wrapping party in the first place.

This is a charming book, but I have this weird suspicion that my childhood copy had more to it. Like, where this book throws in an illustration of Oscar and Big Bird decorating a tree with cups of birdseed, I seem to remember my book including step-by-step instructions on how to make those birdseed ornaments. Is it possible something existed that is not on the Muppet Wiki?

Maybe, if it had something to do with the fact that the version I bought from the Amazon seller came with an audio cassette tape (remember those, all you incredibly old people?) for read-along purposes. I thought maybe the whole Sesame Street Muppet cast would join in, but no, the whole thing is just read by Big Bird and Oscar. And that’s absolutely fine, because it leads to some pretty impressive voice work by Caroll Spinney. So, first off, it’s nice that he even bothers to make Big Bird do Bert, Ernie and Betty Lou’s voices.

(Am I remembering wrong, or was there a rumor at one point that Spinney had been offered Ernie after Jim Henson’s death, but politely declined? He would have been pretty good, I bet.)

But then there’s Big Bird as Grover, which has to be heard to be believed. And then it gets really wowie-zowie and head-trippy: How about Oscar telling a story in which he quotes Big Bird? That’s right, it’s Caroll Spinney as Oscar as Big Bird!

And as long as we’re listening to audio clips, the “turn the page” sound on this thing sounds incredibly, uncannily familiar to me. Maybe it was used on the show somewhere, or on another read-along album. If anyone out there has any insight, I would to know where this sound came from.

The audio tape ends with “The Twelve Days of Christmas” sung by all the Sesame folks, and it’s taken directly from the aforementioned LP. By that time it’s actually jarring to hear Grover and Ernie and Hardhead Henry Harris not voiced by Caroll Spinney.

So this is a charming book and a neato cassette tape, and more than anything it makes me wish Sesame Street Muppets would come a-caroling outside my apartment window. Maybe if I dream hard enough, Mumford Claus will make my wish come true. Or he’ll just screw it up.

Click here to be voiced by Caroll Spinney on the Tough Pigs forum!