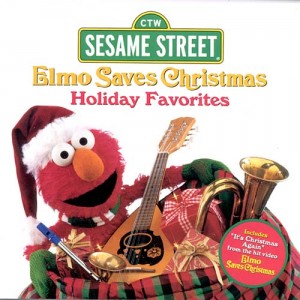 Anyone who knows me knows that Sesame Street and Christmas are both very high on my list of favorite things in the whole world (#7 and #3, respectively). Naturally, I spend most of the year waiting excitedly for the holiday season, when I can pull out my Sesame Street Christmas albums. Each December, I get in the old-school spirit with Merry Christmas from Christmas Street, I gleefully join in during Christmas Sing-Along, and I relax as Jon Stone once again tells me of a Christmas Eve on Sesame Street.

For years, I assumed that those were the only full-length Sesame Street Christmas albums. Sure, I knew about the updated version of Merry Christmas from 1995, but I owned the original, so I never worried about it. Nope. With my three records, I was happy. End of story.

But that’s not the end of the story at all! A couple of weeks ago, while clicking around Muppet Wiki, I discovered Elmo Saves Christmas: Holiday Favorites. Not simply a soundtrack to the (great) TV special of the same name, this was an entire CD of original, brand-new Christmas fun! Okay, so the album’s from 1998 and in this case “brand new” means “twelve years old.” Big deal! It was new to me, so I quickly ordered a copy.

When it arrived, I interrupted my scheduled afternoon of cutting out snowflakes and drinking egg nog, and I listened to the entire thing. Based on the track listing, I knew the CD was going to be very heavy on Elmo. Now, I’m actually pretty fond of everyone’s favorite screechy-voiced hellion. But eight out of the record’s thirteen tracks have Elmo listed as a singer, which seemed like a bit too much tickling for me. 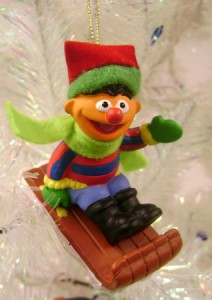 As it turns out, I shouldn’t have worried. To my surprise and delight, the first voice we hear is not Elmo — it’s Ernie! My very favorite Sesame Street character of them all! Hearing Steve Whitmire’s version of the character instantly reminded me that this album was going to be fundamentally different from all of the other Sesame Street Christmas records I own, with several newer additions to the cast. I’ll gladly take a giant heap of Elmo if it means I also get Hoots, Telly, Zoe, Rosita, and a not-at-all-imaginary Mr. Snuffleupagus.

Sesame Street‘s sense of legacy is one of its greatest assets, so of course the album also features a healthy number of classic characters. Bert, Grover, Cookie, Big Bird, Oscar, Prarie Dawn, Herry, and The Count all appear, portrayed by their original performers. Another part of that rich history is the spontaneous “Let’s get together and sing” feeling of many of the classic 70s LPs. Happily, Holiday Favorites follows that tradition. It’s fitting that the first track is “Sleigh Ride,” which feels like a continuation of the earlier Christmas albums, especially Sing-Along. It features most of the group together — singing, laughing, and joyfully trading off lines.

While the album features a good mix of characters, Elmo is still the star attraction, so he gets three songs all to himself. The first, “Rockin’ Around the Christmas Tree,” is by far the most fun. You might say, “That’s because it’s the first and you weren’t sick of Elmo yet,” and you might be right. But it’s a catchy song, and it’s perfect for the high-spirited little scamp. 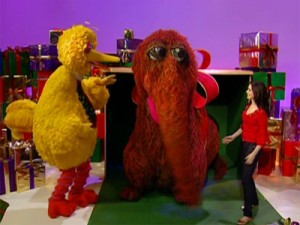 Snuffy is the Jake Gyllenhaal of Christmas.

Sadly, his next solo, “I Want a Hippopotamus for Christmas” is probably the album’s low point. Elmo always sounds awkward singing anything that uses the pronoun “I” prominently, since he has to replace them all with his two-syllable name. This song — a 50s novelty number which wasn’t very novel in the first place — presents that problem in spades. Nine years later, Anne Hathaway would perform an adorable, Snuffy-themed take on this song in Elmo’s Christmas Countdown. If you’re looking to include a cover of this on your latest Muppet Christmas Mix Tape, make it that one.

The only other character to get a solo is Prairie Dawn, who does a sweet, simple, straight-forward version of “O Christmas Tree.” It’s nice to see that, even in the frenetic 90s, there’s still room for a slower, Bob-style number. Prairie’s the perfect character to slow things down, and it’s refreshing to see her get a solo turn in the spotlight.

The duets and trios are where the album really shines. Some of the pairings are familiar, while others are new. The most surprising is “Here Comes Santa Claus,” which presents a delightful duet between Zoe and Big Bird. Zoe is skeptical that Santa is really going to come, but the enthusiasm of her older, much taller friend wins her over. I feel like I’ve discovered a great new Muppet pairing. The only surprising thing about “Blue Christmas” by Grover, Cookie Monster, and Herry is that it never happened until 1998. But Jerry Nelson and Frank Oz are two of the all-time greats, and they knock this one out of the park. 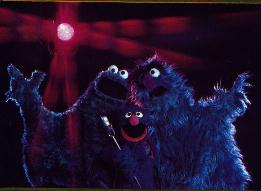 They look happy to me!

The Count joins with a version of The Countess played by Fran Brill for “Let It Snow.” I realized while listening to it that the Count is one of the few Sesame Muppets who can pull off a genuinely romantic song. When he says “The lights are turned way down low,” you know exactly what he means. (Okay, he partially means that it’s easier to count snowflakes with the lights off, but still.)

Big Bird and Snuffy team up for a charming, rambling rendition of “Rudolph the Red-Nosed Reindeer.” Halfway through, they ditch the song and start bantering about what they’d look like with red snuffles and/or beaks. It’s just two best friends, hanging out and having a great time. That’s what Christmas is all about!

The other three duo numbers feature Mr. Noodle’s Enemy, Elmo. In all three songs, he’s paired with a character that brings out the best in him. Most impressively, “Jingle Bell Rock” has Kevin Clash doing a duet with himself, “I Hope That Something Better Comes Along”-style. Hoots the Owl takes the lead, with Elmo adding color. It’s remarkable to me that Clash can play two characters with such high amounts of energy that don’t seem anything alike.

Then Elmo joins Telly for “It’s the Most Wonderful Time of the Year.” Telly, clearly relishing this rare chance to sing lead, rips into the song with gusto. It turns out that Telly is a Christmas enthusiast, just like any adult listening to a Sesame Street Christmas album. He geeks out about how much he loves his tree, ornaments, and Christmas in general. Later, he closes by saying, “Aww, Elmo! I love this season and I love that song!” You said it, brother! 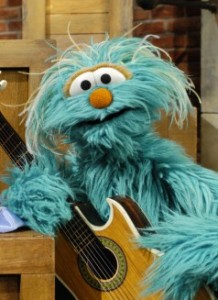 Sadly, Rosita does not play guitar on this album

Elmo’s final singing partner is Rosita. Like Telly, she doesn’t get to sing nearly often enough. Here she gets saddled with “Feliz Navidad,” the obvious choice, but she’s so excited to teach Elmo a Spanish song that I didn’t mind a bit. Rosita’s always at her best when something ignites her passion, and that makes this song a joy.

On the whole, the album could be described the same way. I could quibble about some aspects — no human cast members at all, the inclusion of two unmemorable songs taken from the special — but at the end of the day, this is thirteen mostly excellent Christmas tunes from those lovable Sesame Street Muppets. If you enjoy Christmas music and Sesame Street, you would do well to add it to your collection. It’s twelve years old, so I bet you could find it pretty cheap!