Infection. Uncontrollable laughter. Worldwide panic. These are the things that mean Christmas to me.

Below, you’ll find the pages of a Sesame Street book commemorating the holiday, with the bonus of a super secret mystery to be paid off on the final page! Be sure to click the images to see them all big ‘n’ stuff! 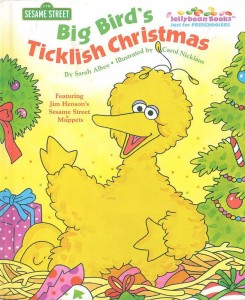 That’s right, we’re reading Big Bird’s Ticklish Christmas! Big Bird looks so damn happy here, what with his nest full of unused wrapping paper, his wreath hanging on nothing whatsoever, and a Christmas tree decorated with the finest ball bearings Hooper’s Store has to offer! 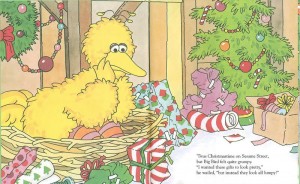 Oh, but now Big Bird’s sad. Yeah, I guess the story has to start out that way. It seems that he’s down about his gift wrapping abilities. That, or he’s upset about the fact that he bought lumpy presents for all his friends. But don’t you know that great things come in lumpy packages??? I know I cherish the Ziploc bag filled with chicken salad that my mom gave me last year. And I always will. 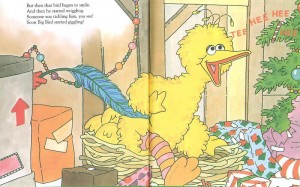 It’s a tickle attack! Some mysterious red-handed creature snuck into Big Bird’s alleyway nest to give him a scare! That’s kinda creepy, if you think about it. I know I wouldn’t want a stranger breaking into my house with intent to tickle.

Also, what’s up with that giant blue feather?? If I didn’t know any better, I’d think that it’s all that remains of the Tickler’s last victim. Look out Big Bird, the Tickler might be using a giant yellow feather next time! 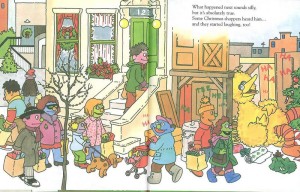 I don’t know about you, but I usually stop laughing once the tickling stops. But not Big Bird! He finds that tickle so hilarious, now all the Anything Muppets (all of whom happen to be passing by 123 Sesame Street at the time) break into an uncontrollable laughter. My theory: They’re all really laughing at the fact that Big Bird has now suddenly grown three sizes too large for his doorway. 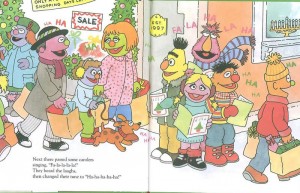 Now the little girl with the dog, the lady in her nightgown, and the guy in the ugly hat and saddle shoes have brought the laughing infection to some recognizable characters: Bert and his Asian friend Ernie, a possibly half-naked Telly (December’s gotta be cold, even for a monster!), and Betty Lou (her appearance in this book must be a Christmas present from illustrator Carol Nicklaus).

And that menorah in the window is the only representation Hanukkah gets in this book. Though we shouldn’t be surprised. 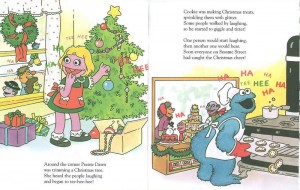 There’s that guy in the ugly hat again! That’s continuity for ya, folks! And they’re making Prairie Dawn laugh out loud while trimming her tiny, tiny tree. Next door, Cookie Monster is working at his bakery. (Wait, really? Did anyone think for a second that Cookie Monster would be able to last more than three seconds in his own bakery??) Of course, this page contains the most unbelievable part of the whole story, and that’s the idea that Cookie Monster might somehow allow baked goods to fall on the floor. 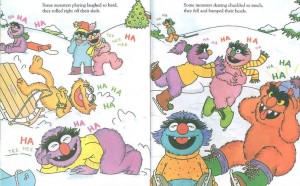 And as Zoe lay dying from laughter, her last word was, “Rosebud.” (Spoiler: IT’S THE SLED!)

I don’t know why, but I’m increasingly bothered by the sight of these half-naked monsters playing in the snow. Like, why do some of them need boots and others don’t? Or why is Frazzle bothering to cover his head when the rest of him might freeze? And don’t get me started on Cookie Monster’s risque use of an apron… 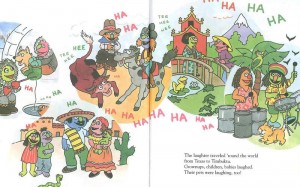 Stereotypes all around the world are joining in on the laughs! From the ice climbers to the gypsies, from the Brokeback Mountains to Bob Marley and the Wailers, and every pagoda in between. Boy, if the terrorists ever figure out a way to attach a deadly virus to laughter, we are screwed. 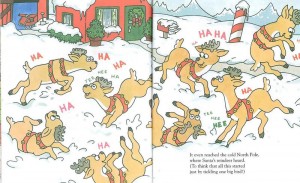 I think Blitzen is only pretending to laugh because he didn’t understand the joke and he desperately wants to fit in. 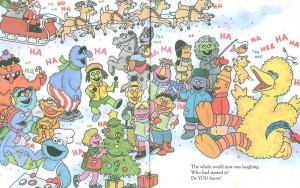 Oh oh, I know! It was Herry Monster’s stripey pants, wasn’t it?? Or maybe Cookie Monster’s cookies are laced with nitrous oxide! Or Ernie just changed the lyrics of Feliz Navidad to something dirty! Or everybody thinks that Eskimos are funny looking! 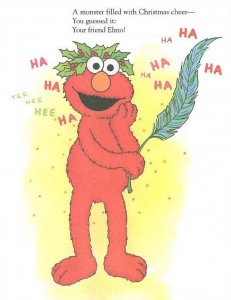 Oh. It was Elmo. I guess he was overcompensating for almost ruining Christmas a few years ago. But why did he insist on using the powers of tickling as the means to his end? Dude needs to get a new shtick. Maybe Elmo’s new thing can be wearing holly berries on his head year-round. Because that would be neither ridiculous nor unnecessary.

In conclusion, this book delivered on every promise it made. Big Bird was in it, there was tickling involved, and it happened to take place on Christmas. Sadly, Big Bird’s gift wrapping still looks like shit. Time to break out the feathers!!

Click here to tickle on the 25th on the ToughPigs forum!