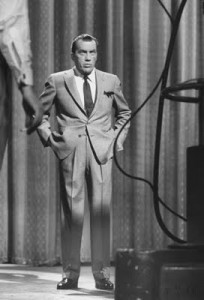 The Muppets have made dozens of Christmas-themed productions over the years, including movies, TV specials, albums, episodes of their own series and guest-appearances on other ones. Today we’re going to examine some of the earliest Christmases the Muppets ever spent on television, from The Ed Sullivan Show. We’ll see that these appearances contained many of the factors which made later specials so successful.

The Muppets appeared on Sullivan’s program twenty-five times during its final five seasons. These two Christmas sketches can both be found on two different DVD releases, A Classic Christmas from the Ed Sullivan Show and Muppets Magic from the Ed Sullivan Show. So run to the store, buy one of those DVDs (I’d recommend the latter, a must-have for any Muppet fan), and meet me back here for the next paragraph.

The longer of the two sketches (at nearly six minutes), this one takes place in a cheaply-built corner of Santa’s Workshop. We open on Santa Claus (1950s TV star Arthur Godfrey) building toys and singing a toy-building song called “It’s Christmas Tomorrow.” I noticed that three of the child names mentioned by Santa in the song are Don, Frankie, and Brian. I don’t know if they’re named after Jim Henson’s co-workers and four-year-old son, but it would be neat if they were. 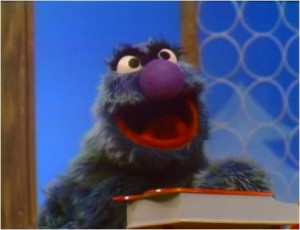 Does this look like a meter man to you?

Santa’s toy-making is interrupted when a Frackle named Thudge (Jim Henson) sneaks into his workshop. He tries to explain his presence by saying he’s there to check the meter, but he is soon followed by the rest of his gang (including an early green version of Grover!). They call themselves Santa’s reindeer, but it turns out that they’re actually self-proclaimed “thugs, crooks, and burglars.” They’re going to steal all of Santa’s toys for themselves, as they reveal in a thievery-themed verse of the song.

But Santa pulls a fast one on them — they can’t steal the toys, because he’s giving them the toys! Realizing that this would deprive all of the world’s children of Christmas joy, they turn over a new leaf. Santa gives them each a present (except for Snork, one of the little ones in the back. What’s up with that, Santa?!) and everyone sings a final verse of “It’s Christmas Tomorrow.” Happy Holidays, you monstrous scum!

The Muppets had a tremendous ability to work well with guest-stars, even by 1967, and this number is proof of that. Arthur Godfrey wears no beard and makes no attempt to be anyone but himself. At the beginning, I thought he seemed bored. Maybe it’s just that every time I see him, all I can think of is his public firing of Julius LaRosa and subsequent fall from grace, but he definitely acts like he’d rather be somewhere else.

However, that all changes when the Muppets show up. After that, Godfrey becomes much more invested in the material. He smiles while talking to the Frackles, sings more gleefully, and generally appears to be a whole lot more comfortable about wearing a Santa Claus costume on national television. Of course, this has the strange effect of making it seem like Santa is only happier when monsters break into his workshop. But hey — the Muppets warmed the heart of the sour guest-star! Yay!

Heart is really what this routine is all about. The characters invest completely in the song without a hint of irony or hesitation, even when they’re evil. Even though it occurs in less than six minutes, their emotional turn-around feels completely sincere. They still get in a few good jokes, such as a sung line about selling the toys at an enormous profit (which is funnier when Frank Oz says it, I swear), but for the most part, the focus is on putting a warm smile on the viewer’s face. 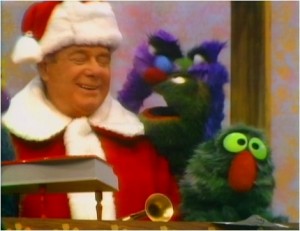 (One last aside about “Santa Claus Routine” — it reminds me how ill-suited Ed Sullivan was for hosting a television show. He manages to trip over his words three times in the intro, including calling the star “Gar — Arthur Godfrey,” and instructing the audience to “give them a warm . . . hand.” The man had a terrific eye for talent, and knew how to put a show together, but he couldn’t read an introduction without error to save his life.)

As this four-minute routine begins, Dasher (Jim Henson) calls the other reindeer together. It hasn’t snowed yet in the North Pole and it’s only three days until Christmas. Since the Indians have gotten great results from rain dances, the reindeer decide to try a Snow Dance. This is a catchy little rhyme (containing lines such as “If only it would snow how happy we’d be, and we’d smile and grin and laugh — hee hee”), but it’s a failure, bringing only rain.

However, our heroes don’t give up! Dasher joins in, and the rhyme becomes an energetic song. This leads to the falling of a single snowflake, and then a whole bunch of them! Success! Finally, Jim Henson and Bob Payne come out with reindeer on their arms on their arms, and everyone has a wonderful Christmas.

Unlike the previous year’s sketch, this one aims entirely for laughs. We hear a bunch of old roasted chestnuts, and they’re all delivered with gusto. One reindeer claims he’s quitting to get a job as a hat rack. When the dance brings rain instead of snow, “After all, we’re RAIN-deer!”

These were old jokes even in 1968, and Jim Henson knew that. Consequently, a set-up like “What’s snew?” is treated like it’s inevitable. The entire squad responds “Nothin’s snew! What’s snew with you?” in unison, like they’re sick of that joke, which just makes it funnier. (And it becomes funnier still when you remember that Henson and Jerry Juhl liked that joke enough to pull it out of storage twenty years later in Muppet Family Christmas.) 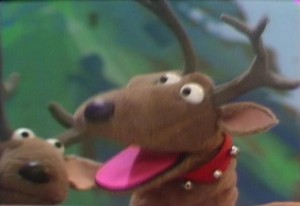 Many of the gags work entirely on the strength of the performances. When the reindeer keep interrupting Dasher to sing Christmas carols, it’s funny because of their enthusiasm, and because of the way the deer move their necks in and out in time to the music. The second such bit is nicely capped when Dasher shakes his head in disgust and calls them twig-heads. That’s one example of the funny body language. Another occurs during the snow dance, when the reindeer wiggle their tails like no one is watching.

The Muppets displayed different strengths in each of these two sketches — they were hilarious in one and heart-warming in the other. They would later find the perfect combination of the two in many of their most beloved holiday productions. That grand-tradition of full-length Christmas specials would start, in fact, on The Ed Sullivan Show in 1970. How did the Muppets and Sullivan join forces to combine the winning elements of Santa Claus, Frackles, a big-name guest-star, music and corny jokes? Come back tomorrow, and we’ll tell you all about it.

Click here to do the Snow Dance on the Tough Pigs forum.