12 Days of Muppet Christmas, Day 1: The True Meaning of Tweeznax 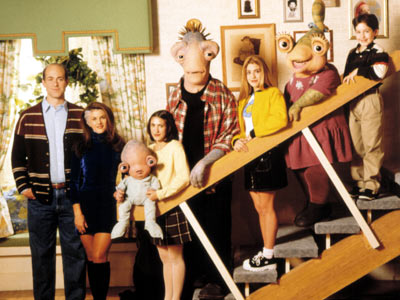 Can you guess which kids are aliens?

Hey, it’s almost Christmas! Here at Tough Pigs, we love Christmas almost as much as we love Muppets, which is why we’re presenting The 12 Days of Christmas, in which Anthony Strand, Joe Hennes, and myself will be writing about Muppety Christmas things for the twelve days leading up to and including Christmas. But we’re not going to be doing The Muppet Christmas Carol or Christmas Eve on Sesame Street… We’re hoping to tell you about a few things you’re not intimately familiar with.

Speaking of which, what better way to kick off our celebration of Muppet Christmas than with an episode of a TV show most Muppet fans have never seen, which is not even about Christmas?

I may be the only human from Earth who watched every episode of Aliens in the Family during its brief original run on ABC, so I’ll start with the premise. Have you ever wondered what The Brady Bunch would be like if Carol were an alien scientist who abducted Mike to experiment on him before falling in love and forming a big half-human, half-alien family? Of course you haven’t. Why would you? But the folks at Jim Henson Television did back in 1996, when Dinosaurs was a fading memory and they were looking to take another shot at a Creature Shop sitcom.

And so, for eight glorious episodes, there was the Brody family: Human dad Doug, his kids Heather and Adam, and alien mom Cookie, with her offspring Bobut (the heir to the throne of Emperor of the Universe), Snizzy (a super-genius), and Spit. Spit’s a teenage dude who is the catalyst for the plot of the holiday-ish episode “A Very Brody Tweeznax,” starting with the scene where he shows up to class without his term paper. 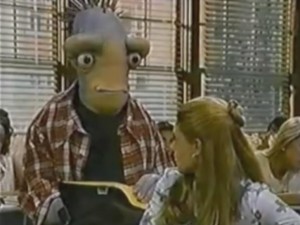 I bet Spit has a hard time shopping for sunglasses.

He’s not going to claim the dog ate it, because in fact Spit himself ate it, but now he has to come up with something. He could probably tell a very simple lie, like he left it at home, but instead he tells his teacher that he doesn’t have it because he’s been so distracted with his family’s preparations for Tweeznax, the most important holiday on his home planet. He goes to great lengths to avoid getting in trouble at school… kind of like an alien Zach Morris, but with more obvious canned laughter.

Tweeznax, he says, is “a two-week celebration of peace, brotherhood, and understanding… at the conclusion of which the relentless maiming and pillaging resume.” The teacher isn’t buying it, so he sends Spit to the principal’s office, where we discover that the principal is C.J. from The West Wing. She asks Spit for more details, and he obliges: Tweeznax begins with the decoration of the Flackenhaggish, a large rock that is decorated with meats from many planets. Then Uncle Tweeznax (a scaly, green, reptilian biped) rides his giant worm around the world delivering presents to the good kids, and flaming hot pokers to the bad kids. The worm’s name is Lapicnirp Namrehs, which Spit makes up by reversing the letters on Principal Sherman’s nameplate. For those of you who might want to plan your own Tweeznax celebration, that’s pronounced “Lap-is-nerp Nam-rez.”

Principal Sherman can’t risk a lawsuit for failing to respect Spit’s family’s native traditions, so she allows all the Brody kids two weeks off. The only catch: They have to perform a Tweeznax pageant for the other kids at school. Spit explains this to Snizzy and their human step-siblings, and they agree to play along, if only to get the time off. (But wouldn’t their parents notice they weren’t going to school? Or were they just going to pretend to leave for school every day, or make up another lie?)

But THEN — and I’m almost done with the synopsis, I promise — their baby brother Bobut overhears them planning the Tweeznax pageant and thinks it’s a real thing, and he gets all excited, so the parents decide the whole family has to celebrate Tweeznax exactly the way Spit described, so as not to disappoint Bobut. So they do. Which makes me wonder how long they plan to keep up the charade — will they celebrate Tweeznax again next year? When will they tell Bobut the truth? Perhaps the writers were planning to address that in future seasons of the show, but for now everyone puts on silly costumes. 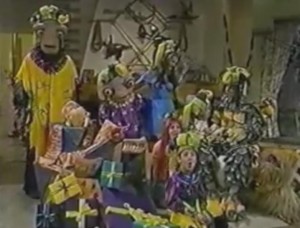 Does your family get a real Flackenhaggish every year, or do you use an artificial one?

So there’s no actual Christmas here, but I think Tweeznax provides an interesting take on holiday traditions. The Tweeznax rituals Spit talks about seem ridiculous to his teacher, but if an alien came to Earth with no prior knowledge of our culture, he’d be pretty weirded out by Christmas. We go to office parties and get drunk, we watch TV shows about talking caribou, we bring dead trees into our houses and hang tiny sculptures of the Swedish Chef being held at gunpoint by lobsters on them… and the purpose of it is to celebrate the birth of the Messiah? From a distance, it seems just as strange as putting meat on a rock.

But ultimately, Snizzy has the right idea. When Heather complains about being forced to decorate the house for a fake holiday (Isn’t that just like Heather?), Snizzy speaks up: “The sentiments behind it are real,” she says. “Peace. Brotherhood. Understanding. Tweeznax brought us together, and I think we should sing.” And it’s the same with Christmas: No matter how you feel about the holiday, the idea of a day devoted to feeling good about everyone and everything is pretty great. Even if you don’t have a nose. In fact, I think these weird-looking kids have finally helped me see the true meaning of Christmas I’ve been searching for my entire life. So I would like to take this opportunity to wish everyone reading this a Merry Christmas, and an extremely joyous Tweeznax! And yes, I think we should sing. Go ahead, you start.

Click here to stand under the veal chop and get a kiss on the Tough Pigs forum!