Probably the second-best part about the release of The Muppets (after the actual release of The Muppets) was the anticipation.  And the biggest part of that, by far, was the assortment of trailers, teasers, and parodies that came our way.  And now we get to do it all over again in preparation of Muppets Most Wanted.

The first Muppets Most Wanted teaser just popped up online this week.  Give it another view right here, whydontcha?

There’s just so much to see in there!  Enough that you’d need a quick trigger finger to pause at just the right time, plus a PhD in Muppetology to decipher most of it.  Lucky for you, we here at the ToughPigs Institute for Henson Research have both of those things in spades.  We’ve done this sort of deep analysis for Muppet movie trailers before, so let’s continue that tradition and take a peek at what’s worth noting!

Please note that there are potential spoilers ahead.  Because who knows if we’re really right or not? 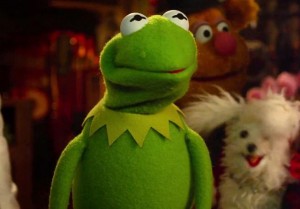 Kermit is Not Kermit

Note the shorter collar, the smaller pupils, and that green (possibly painted-over) mole.  If you think you’re seeing Kermit in any of these shots, there’s only a 50% chance you’d be right.  Otherwise, that’s the frog known as Constantine. 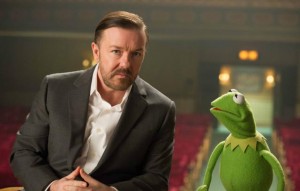 Return of the Muppet Theater

Speaking of Constantine, what’s he doing in the Muppet Show “O”?  And in what looks like the Muppet Theater with Ricky Gervais?    Perhaps they’re inside the theater playing pretend while the Muppets are celebrating just outside after the telethon.  Or maybe they’re trying to put on a Muppet Show of their own.

No, these aren’t the flashy tuxedos from Muppets Take Manhattan.  But they’re most definitely in the same style.  We’ve been so busy comparing Muppets Most Wanted to The Great Muppet Caper, we haven’t even been looking toward Muppets Take Manhattan as inspiration!  Either way, this is a good case of looking back for inspiration, rather than trying to guess at what might be popular in the moment. 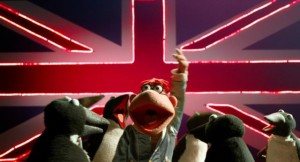 That said, here we have Scooter singing the pop song, “Moves Like Jagger”, which was released as recently as 2011.  But I’m not worried that the Muppets might be trying too hard to be “hip”.  Kermit’s “Good grief”, not to mention the fact that it’s being sung by one of the nerdiest characters, tells me that they have no intention of taking themselves too seriously.  Remember how worried we were about the fart shoes? 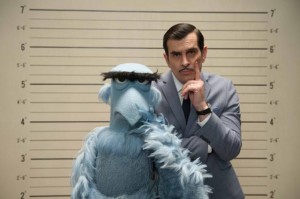 This is our first real look at Ty Burrell as Jean Pierre Napoleon, the French Interpol agent we presume will be chasing Kermit/Constantine throughout the film.  There are two things I’m fascinated by: First, it looks like Napoleon will be teaming up with Sam the Eagle, giving Sam a potentially huge role in a Muppet film for the second time, after Muppet Treasure Island.  As a self-proclaimed Sam fanatic (who may or may not have his action figure in my bathroom where I can look at it every day), I am incredibly excited about that.  Plus, partnering him with a Frenchman (named Napoleon!) is bound to make his red, white and blue brain explode.  The other thing that interests me is seeing Napoleon in his tiny car and drinking from a tiny cappuccino cup.  Could he just be really into tiny things?  If so, that’s a hilarious shtick, and I’m excited to see where that might lead. 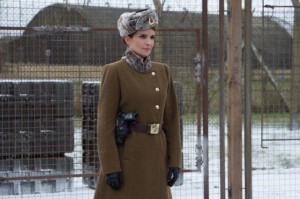 Speaking of celebrities, we also got our first good look at Tina Fey as Nadia, the Russian gulag guard.  Unfortunately, it’s just a glimpse.  But what’s even more exciting are the celebrity prisoners she has in her prison. 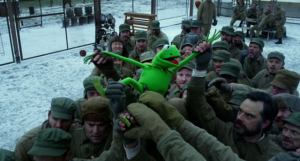 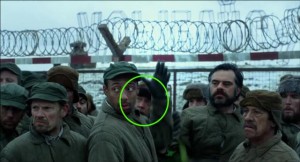 If you look closely, you’ll find previously announced celebrity cameos like Danny Trejo and Ray Liotta.  But there are a few famous convicts that we didn’t know about too!  Bret McKenzie’s Flight of the Conchords costar Jemaine Clement is in there, possibly hinting at a FotC reunion.  And more interesting to folks around here is Steve Whitmire (circled, since he’s hard to spot), which explains how Kermit could be lifted up like that without the need to hide the puppeteer.  Much less interesting is the appearance of Muppet Treasure Island background pirate Calico (way, way in the background). 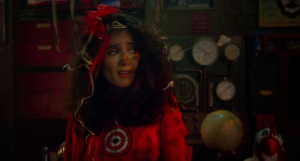 Hey, let’s keep talking about celebrities!  We’ve got P Diddy, we’ve got Disney stars that I’d never heard of before this movie, and we’ve got Salma Hayek, only one of which was a complete surprise!  Here’s a hint: The shocker is the one with a target on her chest.  Wow, that came out weird. 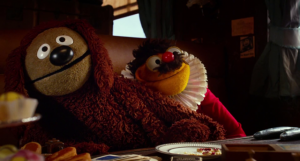 Rowlf and Lew Do Something Funny

Moving away from human beings and back into the floppy arms of the Muppets, I’m excited to see that there will be a focus on some of the B- and C-list characters.  Aside from the previously established Sam the Eagle, it looks like there will be some healthy screen time for Rowlf, Lew Zealand, Walter, Pepe, Scooter, Foo Foo, and the triumphant return of Rizzo.  Also Calico, but nobody cares about that guy. 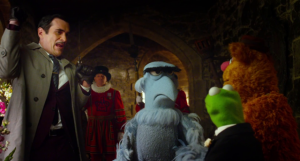 As we surmised, there’s bound to be a ton of Britishisms in Muppets Most Wanted, and we’ve already seen a few in the British flag behind Scooter’s “Moves Like Jagger” scene and the Beefeaters in the background of another.  I’m excited to see what else from across the pond we’ll be seeing. 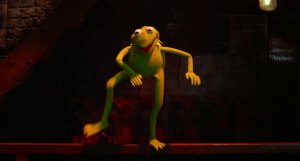 Just because we’re living in a world of CGI doesn’t mean we can’t pull out a few puppetry tricks too.  In one brief scene, Kermit Constantine does a full-bodied dance in Bunraku-style.  It just wouldn’t be a Muppet movie without one of those “How’d they do that?” moments.  Here’s hoping they find a way to really blow us away. 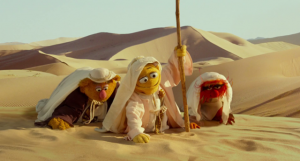 I don’t know what to make of this desert thing, but I like it.

We’re expecting the next trailer to have even more new shots and story elements, so stay tuned for our analyses soon after they debut!

Click here to paint a target on your chest on the ToughPigs forum!

It’s Not Easy Being Mean: Analyzing the Muppets Most Wanted Trailer