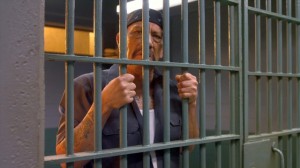 Waaay back in December 2010, we revealed that scary movie badass Danny Trejo would be appearing in The Muppets, which was later confirmed by his cameo in one of the movie trailers.  Imagine our shock (and probably Trejo’s too) when he wasn’t in the film at all, most likely left on the cutting room floor.  I don’t know about you, but I’d never use the term “cutting room floor” around the guy from Machete.

In a recent interview with Muppets… Again cameo’er Ray Liotta, he revealed that he shared a scene with Danny Trejo.  Apparently they’re singing and dancing.  So that should be interesting.

In any case, I’m wondering if Trejo will be reprising his role as the prisoner, which is a possibility since we know there are some scenes that take place in a Russian gulag.  And hey, Ray Liotta played a security guard in Muppets From Space, so maybe he’s working as a prison guard!  That’s an awful lot of Muppet continuity there.

Many thanks to ToughPigs’ own Daniel for the info! Click here to stage a prison break on the ToughPigs forum!