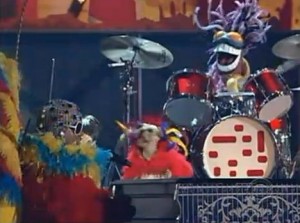 When it was first announced that Jim Henson Company puppets would be performing at this year’s Grammy awards show with Cee Lo Green and Gwyneth Paltrow, we were really… confused. That’s because it was originally reported by several entertainment news sites that it would be the Muppets joining Cee Lo and G. Pal onstage, and these days — as every true geek knows — Henson puppets ain’t Muppets. Even after it became clear that it would actually be Henson critters, like the ones seen in the Stuffed and Unstrung live improv show, we weren’t quite sure what to expect.

And then last night the Grammys happened, and in my own humble opinion, the musical number in question pretty much rocked the house. As expected, Cee Lo did a cleaned-up version of his hit song “F— You,” accompanied by an energetic band of crazy alien-looking guys and some puppet backup singers. Also that dog wearing a diaper was there. The whole thing had a very Muppet Show feel to it, right up to and including the fact that Cee Lo’s costume was an homage to the one Elton John wore when he did “Crocodile Rock” with the Muppets:

Curiously, the puppets were never identified as “Henson puppets” or “the stars of Stuffed and Unstrung” or anything like that onscreen, anda look at Twitter during the show revealed a predictable level of confusion (and cynicism). Several people wondered why Kermit wasn’t there, several others wondered when “the Grammys turned into Sesame Street,” and many, many people thought they were clever for declaring that Jim Henson was rolling over in his grave. But you can judge for yourself… As of right now, the performance can be viewed below via NeonLimelight.com. It’s already been removed from YouTube once, though, so watch it while you can!

Click here to censor your lyrics on the Tough Pigs forum!