Henson Company Will Swear at the Grammys

It’s been a long time coming. Everyone knew that this moment had to come sooner or later. And I for one am glad it’s finally here, after years of waiting. The Muppets (*see update) will perform at the Grammy Awards ceremony with Gwyneth Paltrow and Cee-Lo Green.

Please. Try and contain yourselves.

According to MTV.com, Paltrow, Green, and some as-yet-unnamed Muppets will join forces, possibly to croon a safe-for-the-kiddies version of Green’s song “F**k You”. Or as the kids from Glee called it, “Forget You”.

The Grammy Awards will air on CBS on Sunday, February 13.

UPDATE: The Jim Henson Company has tweeted saying that they will be “Henson puppets”, not Muppets. Curiouser and curiouser… 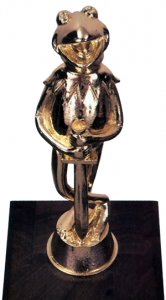