Two years ago, I had the awesome opportunity to attend the 2008 Toy Fair in New York City to get a glimpse at what sort of Muppet toys would be heading our way. It’s a little depressing that not many of those toys made it into stores (where’s all my Fraggle toys at??), but that still doesn’t beat the high of seeing new Muppet merch for the very first time.

Once again, I got to attend Toy Fair, and this time as a legitimate member of the press (no more sneaking in with the janitorial staff for me!). I walked the showroom floor with my trusty camera and notepad and with the help of my Sixth Sense, I found just about every Muppet, Sesame Street, and Fraggle Rock toy in the vicinity.

So, start getting excited for Muppet stuff! And remember, give the images a click to see them in their full glory! 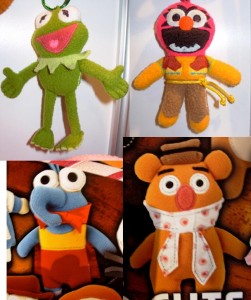 The first booth I came across had an array of Disney plush, including the Pook-a-Looz (which we reported on in our D23 coverage). Unfortunately, this was the only booth at the entire convention that would not allow me to take pictures. I’ve submitted a request with Disney, so hopefully we’ll have some better photos to show soon. In any case, the Pook-a-Looz are just as adorable as they look in the image above, and they come in both regular and keychain sizes. Right now there aren’t any plans to add more characters beyond Kermit, Fozzie, Gonzo and Animal to the line, but that could easily change if they’re popular enough. And a line of stationary and bookbags with the Pook-a-Looz designs are also in the works.

The booth also had a collection of Muppet plush toys of Kermit, Miss Piggy, Fozzie, Gonzo and Animal which were based on the actual design of the puppets. And to be honest, they looked pretty good. The toys came as 20-inch “Giant Hugs”, 14-inch poseable characters, 8-inch bean bags, and 6-inch keychains. And now for the sad news: production on these Muppet toys won’t begin until closer to the upcoming Muppet movie release. So these might just stay as just a fantasy for quite a while… 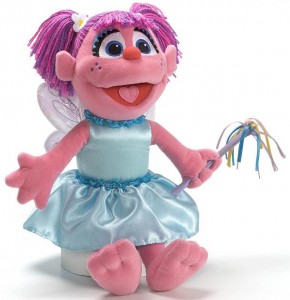 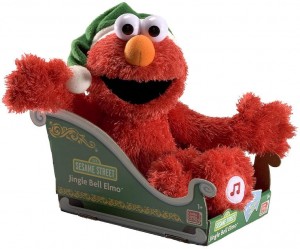 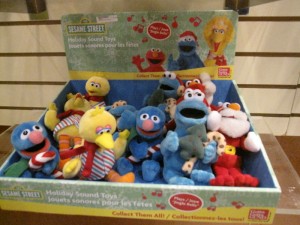 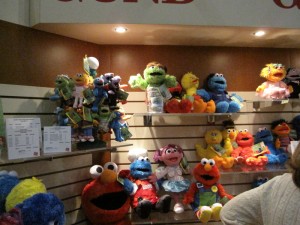 GUND has always been very generous with their Sesame Street toys, keeping them on the shelves for years now. They had a lot of plush and puppets on display, most of which was the same stuff we’ve seen before or a familiar character in a new costume (Cookie Monster as a chef?? Elmo in overalls??? I gotta get me some of that!). But the two toys that GUND was touting were the Fluttering Fairy Abby Cadabby and Jingle Bell Elmo. Fluttering Fairy Abby Cadabby talks (with moving mouth) and flaps her wings. Unfortunately, she does not actually have the ability to fly, but I hear that GUND scientists are hard at work at remedying that. She’ll retail for $40 and will be in stores in August. Jingle Bell Elmo sways and sings Jingle Bells (a song he’s quite familiar with). He’ll retail for $36 and will also be in stores in August. Both toys are impressive in how lifelike they are, but since they’re mostly robot on the inside, they probably won’t have much huggability. And I like a toy I can squeeze. 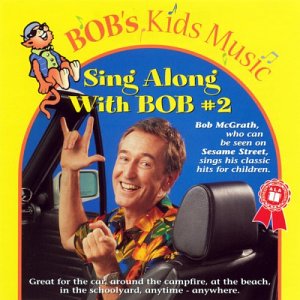 As I turned the next corner, I saw a familiar face: Bob McGrath. Not a picture of Bob, not a standee, not one of the many Bob impersonators. The real Bob! Turns out Bob was there with Allegro Music, signing autographs and promoting his children’s albums. I’ve met Bob a couple times before at book signings, and I was happy when he told me that since our last meeting he has checked out ToughPigs.com and he loves it. So if Bob is reading: Thanks for the kind words! ToughPigs.com: Bob approved. 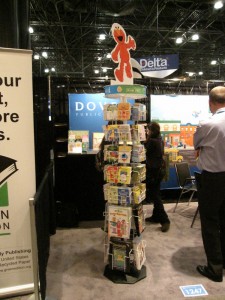 Dover Publications just got the Sesame Street license and they already have a collection of activity books, stickers, colorforms, temporary tattoos, and paper dolls. And at the low, low prices ($1.50 for the smaller books), they sound like some good stocking stuffers for us older fans. Or you could actually give them to a kid or whatever. 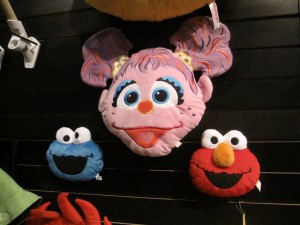 Good Stuff pillows made a few stuffed heads of your favorite Sesame Street characters. Those smaller heads are so tiny, maybe they’re not pillows at all. I guess you could use them for, I dunno, replacements if someone tears the head off your GUND Elmo doll? 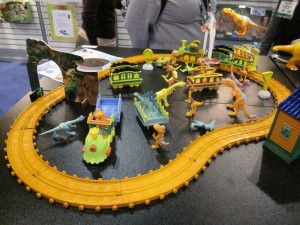 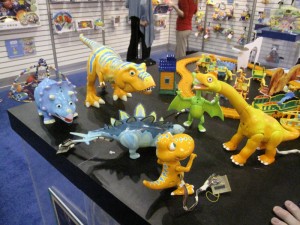 The folks at Learning Curve had a display of Dinosaur Train toys to brag about. The first toy was the one we all knew was coming when the show was first announced: a Dinosaur Train train set. The track comes in one set, and then you can buy packs containing one train car and three dinosaur characters. The dinos fit right in the cars, and the cars fit right on the tracks. Man, this show has everything! But the really impressive toys were the interactive talking dinosaurs. Ranging from $14 to $40 (depending on size), these guys actually know which other talking dinosaur toys are nearby and will talk to each other. And by pressing in the right places (like pushing down on the tail or a button on the back) the characters make realistic movements and noises. And if that weren’t enough, they also talk directly to the kids, encouraging them to wreak havok on Tokyo (or, y’know, just roar and stomp around and stuff). 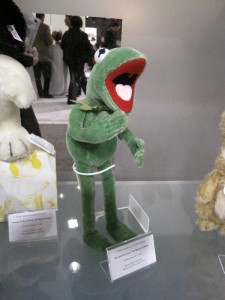 The infamous Steiff Kermit the Frog doll was on display, and he’s exactly as bizarre (and overpriced) as the image suggests. He also doesn’t quite look like the image we’ve seen online, especially in the general wide-open mouth area. The folks at the Steiff booth confirmed that there is no Miss Piggy doll in the works, which was rumored to be their next Muppet toy. Instead, their next venture into the world of Muppets will be Fozzie Bear, which makes sense since Steiff is mainly known for making teddy bears. Fozzie should be available next fall, which is approximately when we will be making fun of it. 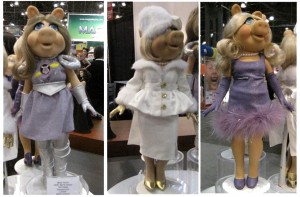 Now, if you’re going to make an expensive Muppet toy, this is the way to do it. The Tonner Toy Company is releasing three Miss Piggy dolls, each of which looks more beautiful than the last. In the image above, you’ll see First Mate Piggy, Fifth Avenue Piggy, and the Basic Miss Piggy dolls. Although Piggy’s looking pretty stylish in the last two, I would find it very difficult to say no to a First Mate Piggy (hint hint, for those of you thinking about what to buy me for Christmas). 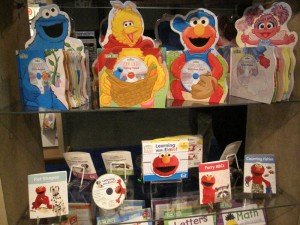 Next up was a collection of Sesame Street books and flashcards from Learning Horizons. Normally this wouldn’t be too notable, but some of the books come with a CD, which reads the story along with the child. And our worst nightmares come true, in that the puppeteers do NOT voice their characters on these CDs! Instead, new voice actors speak for Elmo, Cookie Monster, Rosita and the gang. I’m a little surprised that Sesame Workshop is letting this onto shelves, but not as surprised as those kids will be when they play the CD for the first time and hear Elmo’s Puerto Rican accent, or Abby’s smoker’s cough. 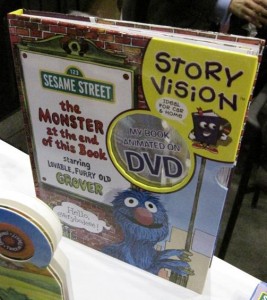 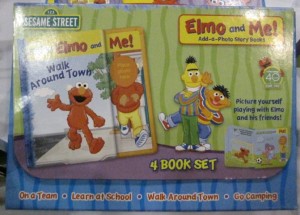 Thankfully Grover is actually Grover in this book/DVD set. And not only is Eric Jacobson correctly cast in the book, but YOU (yes, you!) can be cast in a series of Sesame Street books by inserting your picture (or I guess you can use your kid’s picture) and then you’ll be magically transported to Sesame Street and you’ll get to hang out with Elmo and Bert and Harvey Kneeslapper! The future is now! 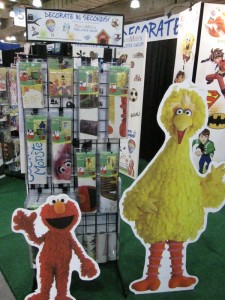 RoomMates makes giant wall decals, which are oversized stickers to put on your child’s bedroom wall for a hammer-less solution to simple nursery decoration. Life-sized (or larger?) photo images of Big Bird, Oscar, Bert and Ernie, Cookie Monster, Elmo, and Abby Cadabby will be available, as well as one package of smaller illustrated stickers. I’ll admit that when I first saw these, I briefly considered where I will be displaying these decorations in my apartment. They’d make for quite the bachelor pad, wouldn’t they? 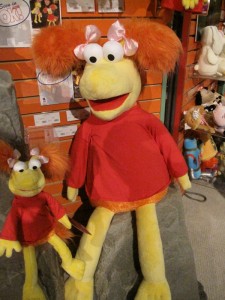 The biggest news comes from Manhattan Toy, who are making Fraggle Rock plush toys and puppets. No, the likenesses aren’t perfect, but at $11 per plush and $12.50 per puppet, I think they look fantastic. Sure, Mokey looks a little sleepy, but let’s take a moment to appreciate the fact that they bothered to make Mokey toys at all! The big lady in the middle is the giant plush Red, who will be the only one of the Fraggle Five to be supersized (for now). The quality on all of the toys seems to be very good, and they will make for great, affordable gifts for the Fraggle fan in your life. The plush and puppets will be in stores by the end of March, and the giant Red will be available by July. 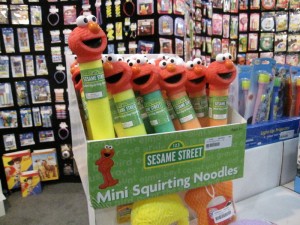 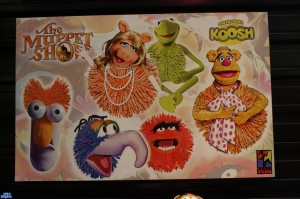 UPDATE: Remember Koosh balls?? Basic Fun will be making Muppet Koosh balls, and my guess is that they will look nothing like the picture above. Those images look like poorly Photoshopped mixtures of Koosh with Palisades figures, photo puppets, stock photography, and a Beaker from an Ugly Toy Pageant. And really, isn’t that just making us wish that there were toys as great as Palisades and the photo puppets on display at Toy Fair this year??

Click here to fill your toy box on the ToughPigs forum!