My Week with the Beanstalk, Hour Three 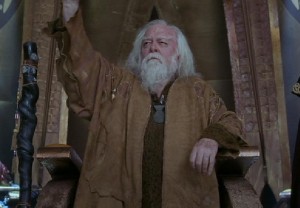 Sharp-eyed readers may have noticed that I haven’t really liked Jack and the Beanstalk so far. My main issue is this: We’re two hours in, and Jack hasn’t actually done anything so far.

Everybody keeps telling Jack how special he is, and Vanessa says that “only the right Jack” can end the family curse. But what makes this Jack the right Jack, besides being a pretty movie star? He basically just mopes around until Ondine shows up and tells him he’s a murderer. He doesn’t really care about other people — the villagers around the castle are protesting the new casino, but Jack doesn’t bother finding out why. It seems like he sees them more as an obstacle that he has to get around rather than real people with real concerns. And then magical people show up and tell him about his destiny, and he sort of follows whatever they say. At the end of the second hour, when he plants the seed and climbs the Beanstalk, he’s pushed into it by flashback voice-overs of Vanessa and Ondine telling him that he has to. He’s amazingly passive; magical stuff happens around him, and he just reacts.

And, worst of all, Jack doesn’t seem to be the brightest bean on the vine. At the beginning of Hour Three, he climbs up the Beanstalk and immediately starts saying the most incredibly stupid things. I’ll give you some examples.

“Ondine! I thought you were gone. But you’re here!”

“Geez, I thought you were a goner, after that… exploding thing.”

“Why am I tied up? Ondine! Am I a prisoner or something?”

Apparently the air is thinner up there.

Anyway, Jack is taken to a big hall and put on trial. He just sort of marches along and looks petulant while everybody tells him to keep quiet. Ondine tells the council of giants the true story of the fairy tale: Thunderdell was really nice, and Jack took advantage of his generosity, stole the goose and harp, and murdered Thunderdell. This part actually could be pretty interesting if it wasn’t taking so darn long.

And — big surprise! — the giants say that Jack is guilty, and they sentence him to death. This is his heartfelt response: “Death? You can’t just kill me.” Ah, but they can. They say he’s guilty again. He offers to go back to his world and bring the goose and harp back. They say no. And you remember how five minutes ago, they said he was guilty and was sentenced to death? Well, guess what. He’s guilty, and they sentence him to death.

You know, I kid Jack and the Beanstalk. But one nice thing about this show is that they don’t spring things on you suddenly. If there’s gonna be a plot point, they give you plenty of time to prepare for it. Jack’s taken to a prison cell, and in his pocket, he finds some of those genetically modified peas that can grow anywhere. Is he going to plant them? Will they grow? Is that ultimately going to feed all of the people in the kingdom and save them from starvation?

Then you get a little time to yourself. You can relax, take a break, get a snack. When you come back — Oh, look! Jack planted the peas, and they’re growing. It’s kind of comforting. I’m starting to feel like no matter what happens in my life, Jack and the Beanstalk will always be there. My rock. My protector. Still sentenced to death, Jack? It’s just nice to know that some things never change.

My Week with Jim Henson’s The Storyteller Day 3: Lucky Stiff

My Week with the Beanstalk, Hour One

My Week with the Beanstalk, Hour Two