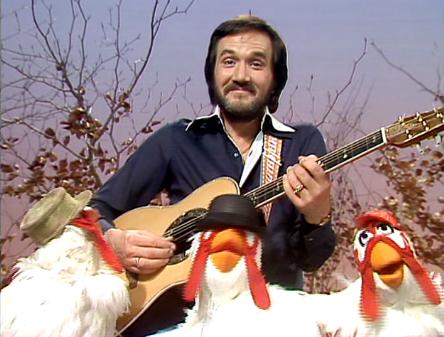 Y’know, not every episode of any television show is going to be an absolute banger. Sometimes there are episodes of shows that are good and hold their own, and that’s about it. They’re not amazing, they’re not terrible. They’re just… kind of there, y’know?

That’s what the Roger Miller episode of The Muppet Show is for me.

Again, I want to reiterate (mostly so Roger Miller fans don’t hunt me down), this episode is not a bad one. It’s an all around solid episode. There are plenty of good moments throughout, and the backstage plot is hands down the best part. It’s just, overall, not the most interesting one. For me, at least. I’ve already had several ToughPigs friends tell me this episode is a favorite, so I recognize I’m in the minority with this opinion.

As said, the best part of this episode is the backstage story, which revolves around an illness spreading to the cast and 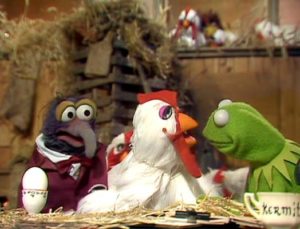 crew. The disease? Cluckitis. The Muppets are one-by-one turned into chickens the moment they catch it. This leads to a whole lot of chicken puppet appearances, with adornments of the Muppet who just transformed. There’s a chicken with no eyes and a mustache for The Swedish Chef. One with purple eye shadow and pearls for Piggy. And, as it turns out, Scooter’s eyeball glasses are just as weird on a chicken as they are on him!

The Cluckitis gag isn’t solved by episode’s end. You’d think someone would have found a cure by curtain call, but nope! Everyone except Roger Miller and Gonzo remains in chicken form as the credits start to roll (which is fun, watching the normal credits but reenacted with chicken puppets). This is all okay by me. It is The Muppet Show after all, so having this absurd thing happen and for it to continue just works. (Plus Roger Miller tells everyone that it’ll pass and they’ll all turn back to normal.) 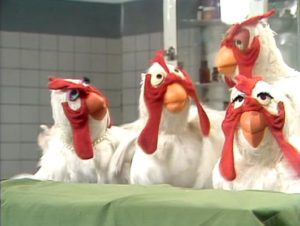 The chicken gag really does lend itself to some good bits. Scooter overhearing Kermit asking a chicken, “Hey, have you always been a chicken?” and then acting like Kermit’s lost his mind is my favorite moment of the entire episode. There’s also a dramatic sting every time “Cluckitis” is uttered and the Muppets all react way over the top, which is fun. Then, of course, there’s my boy Gonzo, who spends a huge amount of this episode being turned on by his friends the second they turn into chickens. Hey, it’s very on brand for him.

Moving past the overarching plot, Roger Miller is a fine guest star. He definitely puts his all in and seems to have a lot of fun while doing so, even yolking it up (bah dum-psst) with a few puns here and there. He nails his three musical numbers, but I will admit, I don’t think they stick with you as well as numbers from other The Muppet Show episodes. I mean, again, maybe there are some diehard Roger Miller fans who’d want to fight me on this, but I really don’t have much else to say on him as a guest star. Good performer. Seems like a real nice guy. That’s kind of it. 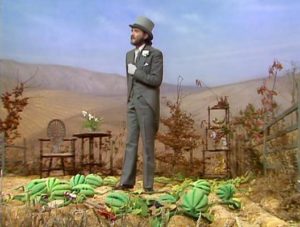 Okay, I will give him props on one thing. In the hands of a lesser guest star, ‘In The Summertime’ would’ve been a boring number. All Miller is given to work off of is a handful of watermelon puppets, all of which are on the ground, making interaction opportunities sparse. But Miller makes it work with his great energy (and his fun scatting).

This is an episode where the backstage plot is far more memorable than any of the acts, songs, or sketches. ‘Alabamy Bound’ feels like a classic Muppet moment, what with the bizarreness of penguins singing on the Mayflower, but it just doesn’t grab you. Neither does ‘Down At The Old Bull and Bush’, and both segments of ‘Pop Goes The Weasel’ and ‘Veterinarian’s Hospital’ just serve to keep the backstage plot moving. 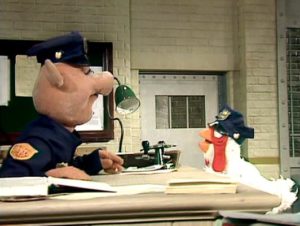 My favorite segment would have to be ‘Bear on Patrol’. Fozzie brings in a criminal who beat him up, Link asks said criminal to give a complete and accurate description of what happened, and the criminal re-beats up Fozzie. It’s simple, but they nail it – which is what The Muppet Show is often great at. (Plus some of you may know how much I love when Frank Oz gets to vamp, which he does in this every time Fozzie gets struck by the criminal.)

Overall, a good episode, but will you remember it after you binge-watch three more episodes? Maybe you will, but I don’t know about me.

MVM (Most Valuable Muppet): I’m going to give it to Kermit, who spends the entire episode in a frenzy, trying to make sure everything goes smoothly (as per usual) and that Roger Miller doesn’t notice everyone’s turning into chickens (as not per usual).

Most Classic Moment: While it’s not the most interesting number, I think ‘Alabamy Bound’ is the one from this episode people remember. 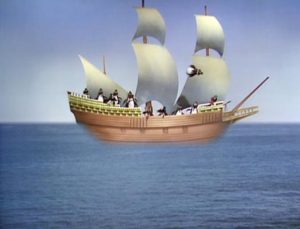 Adultiest Content: Definitely Gonzo looking his friends-turned-chickens up and down while telling us he’s an expert on chickens. Come on. You know what kind of expert he’s talking about.

Best Joke: A chicken-ified Lew Zealand perfecting his boomerang egg act is pretty wonderful. He throws the egg away, and then it comes back to him – duck!

Musical Highlight: During my second watch, I decided ‘In The Summertime’ was my favorite song in the episode. It’s a catchy rendition, and again, Miller brings a whole lot of personality to a song where all he’s given to work with are puppets that are on the ground around him and he’s, y’know, a pretty tall man and not on the ground.

Obscure Character Watch: The Kangaroo in the opening made its first appearance in episode 307, and then only appeared in five Muppet Show episodes altogether. 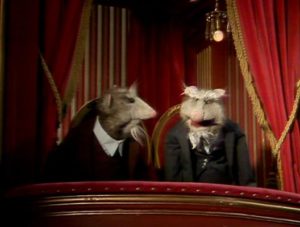 One More Thing…: I told my boyfriend about writing this piece and how I had no idea who Roger Miller even was. He then pointed out that Miller is the voice of the Rooster in Robin Hood who sings the numbers ‘Oo-De-Lally’ and ‘Not In Nottingham’. So shows what I know.

Okay, One More Thing…: The most bizarre moment of the entire episode is when we cut to Statler and Waldorf after the closing credits, who have transformed into dogs, say “I bet you were expecting chickens!”, and start barking. What’s so bizarre about this? The puppets are definitely possums, not dogs.

Click here to contract Cluckitis on the ToughPigs forum!