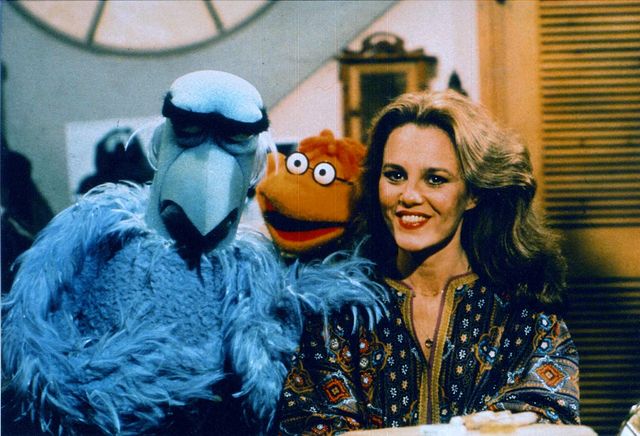 I’d like to start this week’s review with a bit of a confession: I hadn’t seen Madeline Kahn’s episode in a long time before I watched it for this series, and I didn’t remember much about it going into this. I think Kahn was an incredibly funny, multi-talented performer, and I knew I would find something good to say about her and the way she worked with the Muppets. What I didn’t know was that the one thing I’d be saying while I watched this episode was “Holy moly, that was in this episode?” The episode is chock full of classic Muppet Show moments. And I’m not talking “Hehe, Miss Piggy karate chopped someone. Classic.” I’m talking moments that appear every time someone does a tribute to The Muppet Show. Moments that just can just be mentioned by name to elicit a smile on the face of a Muppet fan, and maybe a reenactment or two. “Happy Feet.” The lobster banditos. The Swinetrek doors closing on Link’s head. “Up, Up, and Away.” “The Wishing Song.” Moments that have appeared in compilations, cast albums, and even the occasional live show since this episode first aired. And they all started right here. 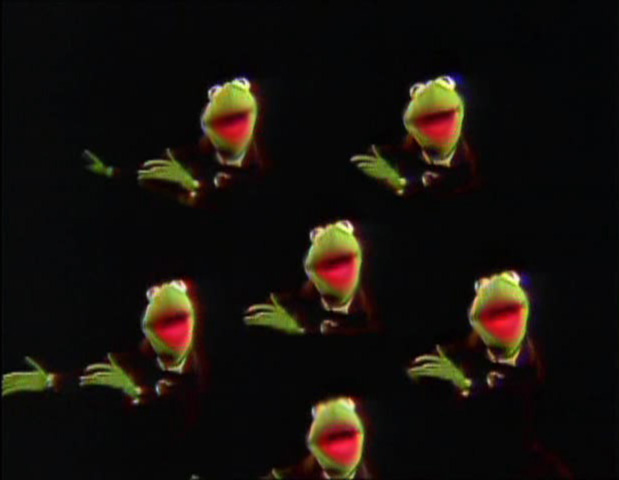 I guess we should start with perhaps the best known of all of these, the opening number, “Happy Feet.” I still think this is an ingenious way to get around a problem with the Muppets’ wonderfully subversive sense of humor. Kermit had become a consummate performer by this point in time, and given the setting of the show and his role in it, it was easy to assume that the frog could, in fact, tap dance. This could’ve easily been waved away by not mentioning it, or writing into an episode that Kermit didn’t tap dance, and that would’ve been the end of it. But it wouldn’t have been fun or entertaining. But that didn’t relieve the issue that Kermit didn’t tap dance most of the time because the puppet has no legs. So, in a now-classic move, we heard taps during the number, but didn’t see them. But we see Kermit move with the agility of a born hoofer, and the illusion works, with a wink and a nod to the audience.

Moving into the show itself, it feels a bit weird. Kahn has plenty of screen time on the show, but it does seem like she’s overshadowed by some of the most memorable bits in the show’s history. She has some great moments, doing a wonderful rendition of “Your Feet” that’s equal parts silly and seductive, battling an angry Doglion with her positivity, and having a sweet backstage story with Gonzo, but if you asked me what I remembered most about this show, I’d probably say “Happy Feet” or the lobster banditos. This episode just has too many memorable moments. That being said, Kahn holds her own. Personally, I love Kahn best when she’s playing characters that are just slightly off-center, with just a touch of mania. Surprisingly, she doesn’t really show that side in this episode, playing it very sincere (with perhaps the exception of the “Happy Girl Meets a Monster” sketch, but even then, it doesn’t have that hint of restrained madness that Kahn’s best work provided). It works well, but it did leave me wishing for something more. 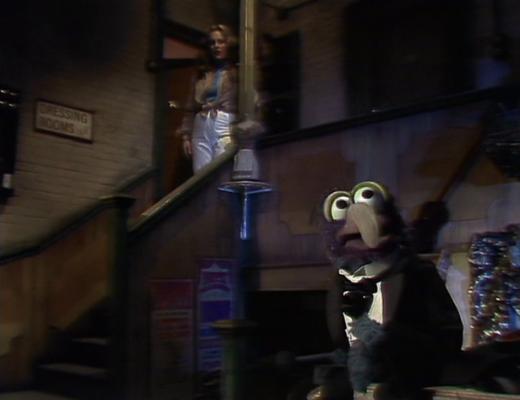 Maybe they chose to make Kahn more of the “straight man” because of all the zaniness going on around her. Gonzo chooses to woo her wearing a magician’s tuxedo, leading to some fun sight gags. Animal shouts out the first line of “A Foggy Day” before he’s booed, leading him to thank the audience. And of course, there’s those lobster banditos and their daring raid on the Swedish Chef. In fact, the whole episode goes from wacky to sweet and back on a dime. Floyd, Dr. Teeth, and Zoot do a soulful rendition of “New York State of Mind” (which, as a native of Long Island, I am required to stand and salute for, as is tradition with all Billy Joel songs). And in the midst of all this, another memorable moment is Gonzo singing “The Wishing Song,” which is heartbreaking and moving, as Gonzo ponders why it is that Madeline doesn’t want to marry him, settle down, raise some kids, and join the PTA. In fact, I see it as the birth of the sometimes-good, sometimes-bad phenomenon of Sad Gonzo. Thankfully, he turns it around for a very funny last line in the goodnights.

Yeah, this is one of those episodes that, if you really want to show what The Muppet Show was about, displays it all in spades. Kahn is a solid guest star, some of the best bits from the show’s history can be found here, and there’s even a really sweet emotional moment or two. An episode that can make you feel so many different emotions is a special thing, and this is certainly special. Ms. Kahn, wherever you may be, I’d be happy to buy you a drink. And if Telly Savalas should find us, no worries. I’ll buy one for him, too! 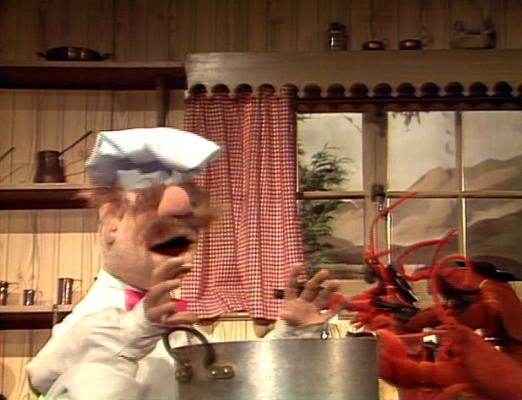 Worst Joke: Statler: “I think they were trying to make a point with that sketch.” Waldorf: “What’s the point?” Statler: “You’re right. Forget it.” Not a real clunker per se, but there are better jokes to be enjoyed in the episode.

Best Joke: Kahn: “I’m sorry it didn’t work out.” Gonzo: “You should be. Now you’ll have to go to all those PTA meetings alone!” I told you Gonzo gets the last laugh!

First Appearance Of…: While it wasn’t the first episode to have it in production order, this was the first episode aired where audiences got to see…shout it with me, everyone…PIGS IN SPAAAAACE!!! And of course, with Pigs in Space’s debut came the first aired episode to feature both Link Hogthrob and Dr. Julius Strangepork. It’s a pretty rudimentary sketch that lays out the dynamic that would enthrall audiences for the rest of the show’s run: Link is the macho, lunkhead captain, Strangepork is the exposition-spouting engineer, and Piggy is the put-upon damsel that clearly has more horse-sense than the others. It’s a decent introduction to one of the most memorable of Muppet Show sketches.

MVM (Most Valuable Muppet): Making me both laugh at his over-the-top attempts to woo Kahn and tear up during “The Wishing Song,” Gonzo blows the competition away to earn the title of MVM for the third time in a row.

Most Classic Moment: Given that we just saw a reprise of it during “The Muppets Take the Bowl,” I think it’s safe to say that it’s “Happy Feet.” Of course, now thanks to Bunraku-style puppetry (and Disney’s recent willingness to occasionally show the puppeteers), the frog truly can tap dance, and Bobby Moynihan can, too! 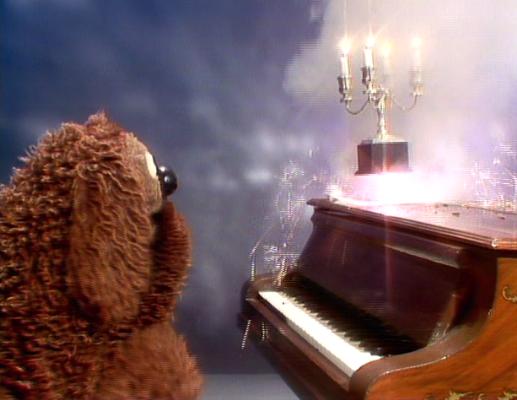 Should-Be-Classic Moment: “Up, Up, and Away” deserves more love. It’s a quick bit, but it’s played perfectly with a classic Muppet ending that comes out of nowhere. Plus, Rowlf’s reaction at the end is priceless.

Obscure Character Watch: Since “First Appearance Of…” was getting crowded, I think it’s also worth mentioning that this was also the first appearance of Doglion, who surprisingly only appeared in nine episodes of The Muppet Show.

One More Thing: Madeline Kahn is in a very rare club: she is only one of two non-Muppet and performer celebrities who have appeared on Sesame Street, guest starred on The Muppet Show, and made a cameo appearance in a theatrical Muppet movie, in this case, The Muppet Movie. (The other? Alan Arkin, who appeared in The Muppets, meaning Kahn was the lone member in this club for a long time.)

Okay, One More Thing: Please comment on social media if you actually shouted “Pigs in Space!” when you read the “First Appearance Of…” section. I’d love to know if someone did. 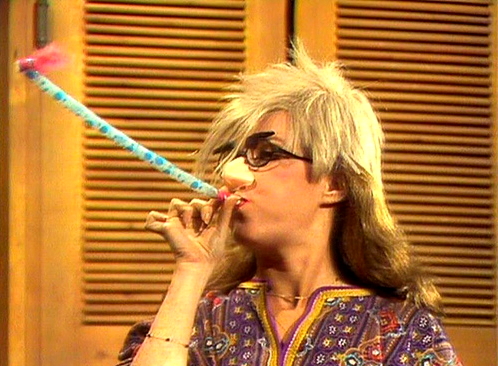 Click here to sing several songs about feet on the ToughPigs forum!