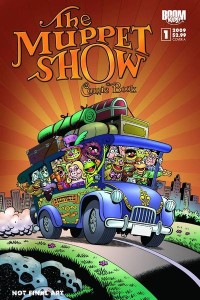 If the Muppets have taught me anything, it?¢‚Ç¨‚Ñ¢s that no matter what sort of rag-tag crew you?¢‚Ç¨‚Ñ¢ve aligned yourself with, the show must go on. Well, someone at BOOM Studios must?¢‚Ç¨‚Ñ¢ve heard the same thing, because the first issue of the ongoing Muppet Show Comic Book will be in stores this Wednesday, January 13.

After taking a much-deserved month off from his artistic duties, writer and artist Roger Langridge comes back in full swing with the first issue in his three-part storyline, ?¢‚Ç¨?ìOn the Road,?¢‚Ç¨¬ù in which we find our Muppet pals going on a nation-wide tour of this great land of ours. Of course, nothing is ever easy for the Muppet gang as they encounter lackluster audiences, an angry weasel, money troubles, an AWOL Fozzie Bear, a hidden tiger, and Statler and Waldorf?¢‚Ç¨‚Ñ¢s extended family (and they sure are an ugly bunch).

Despite all their snags, the Muppet Show On-Tour has lots of highlights that made me grin. They perform (a modified version of) The Muppet Show Theme. Sweetums sings a song at the audience (yeah, you read that right). Miss Piggy sings while Rowlf heckles from behind the piano. Just when I thought this comic couldn?¢‚Ç¨‚Ñ¢t feel any more like The Muppet Show, Langridge reminds us that the Muppets don?¢‚Ç¨‚Ñ¢t need a theater to feel right at home.

One highlight for me was a sequence featuring Fozzie Bear busking on the street for spare change. The text in each frame began with a different letter, teaching the ABCs while telling his sad little story. Next to all of the familiar Muppet Show wackiness in the rest of the issue, these three pages allowed Roger Langridge to (figuratively) sign his autograph on the story, reminding us that he may not have created the formula, but he gets to play in their sandbox. 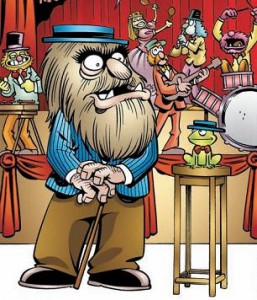 This issue might remind you of the Loretta Lynn episode of The Muppet Show, where the Muppet Theater is being fumigated so they have the entire show at the railroad station. And amidst all of that hilarity ensuing, the show still holds some fantastic numbers and gives a well-worn formula that slight kick in the pants it regularly needs.

Once again, Roger Langridge has impressed me with his cunning and guile (but mostly his writing and artwork), and I can?¢‚Ç¨‚Ñ¢t wait to see where the road takes the Muppets next. No matter where it may be, I know I?¢‚Ç¨‚Ñ¢m along for the ride.

Click here for a preview of The Muppet Show Comic Book #1, which hits stores on Wednesday, January 13.

Click here to hit the road with the ToughPigs forum!