Greetings, greetings, True Believers! It’s that time of year again as San Diego Comic Con (SDCC for short) rushes to greet us! ToughPigs is gearing up to be on the scene to cover all the Henson-related goodness to come next week – July 20th – July 24th – and I’m here to share with you what to look out for!

As you may recall, last year at this time we were getting excited for a little TV show called The Muppets to premiere and in preparation for that, there was SO MUCH MUPPETS at SDCC. This year there is… considerably less. But fear not! There are still plenty of ways to get your Henson geek on so let’s take a look! 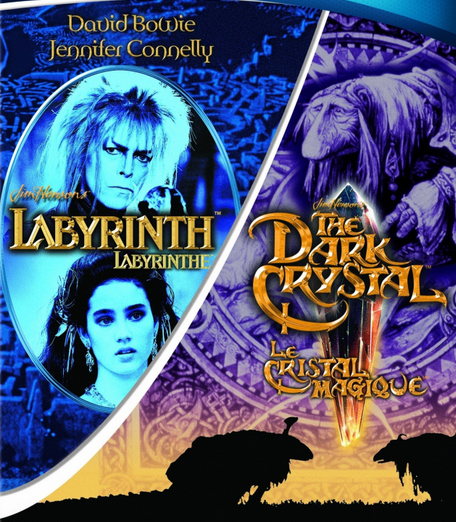 The dual crown jewels for Henson fans at this year’s SDCC are the two panels from our good friends at Archaia previewing all of their upcoming goodies in the worlds of Labyrinth and The Dark Crystal. Check out the panel descriptions below and mark ’em down in your appointment book!

Celebrate the Publishing World of Jim Henson’s Labyrinth with Archaia

To celebrate the 30th anniversary of Jim Henson’s Labyrinth, publisher Archaia (an imprint of BOOM! Studios) has several books set to come out this year! Senior editor Sierra Hahn and artists Eric Powell (The Goon, Big Man Plans), Joëlle Jones (Spider-Woman, Lady Killer), and Jonathan Case (The New Deal, Batman ’66) give fans a sneak peek into these titles, which include original comics, a children’s storybook, and an artists’ tribute collection. Moderated by Nerdist editor-in-chief Rachel Heine.

The Dark Crystal’s World of Publishing

Have you ever read POGO by Walt Kelly? If you haven’t, you should! It’s a fantastic comic strip – some say the best one ever, but we’ll forgive them and assume they’ve somehow never read  Calvin & Hobbes. And of note to Muppet fanatics like us, it was Jim Henson’s favorite comic strip – at least until he read Calvin & Hobbes, I’m assuming. You can definitely see how the characters of Pogo influenced the sweet nature of the Muppets (and as evidenced by the above strip, may have influenced Rowlf’s name). If you have time, check out this fun panel!

The greatest newspaper strip of all time? Some would call it that. Even if you aren’t one of them, you’ve gotta love the wit and whimsy of Walt Kelly’s magnum opus, Pogo, now receiving its first-ever complete reprinting in an Eisner Award-winning series from Fantagraphics Books. Remember this great artist with comics historian Maggie Thompson (Comics Buyer’s Guide), film critic Leonard Maltin, historian Michael Barrier, cartoonist Scott Shaw!, Eric Reynolds (co-editor of the Complete Pogo series), and moderator Mark Evanier (Groo the Wanderer). 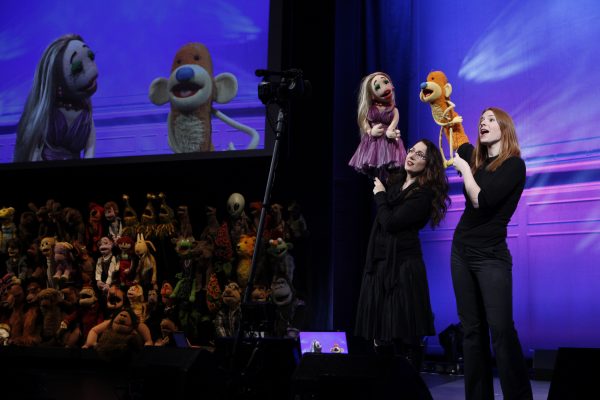 Julianne Buescher was one of the break-out stars of last year’s The Muppets, bringing characters like Denise and Yolanda to the forefront. So why not come cheer her on in a fun panel with some of the best and hardest-working voices in show business today? Bonus: This is the one time where you can say that a Muppeteer “does the voice” of a character! 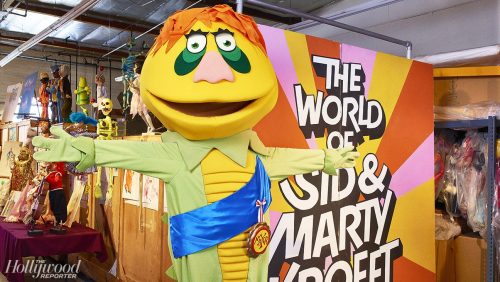 This year has seen a resurgence in Sid & Marty Krofft projects – some of which feature awesome Muppet folks like Michael Oosterman and Victor Yerrid. Head on down to the world of Sid & Marty Krofft and see if you can spot some great puppeteering by the best in the biz!

Sid and Marty Krofft have created and produced some of the most iconic names in family entertainment for over 40 years and are still in action today. Digital platforms such as Amazon Prime (Sigmund and The Sea Monsters starring David Arquette), cable network Nickelodeon (Mutt & Stuff), and iTunes and Fullscreen (Electra Woman and Dyna Girl starring Grace Helbig and Hannah Hart) are all currently thrilling today’s audiences with three new Krofft productions. Join Sid and Marty Krofft along with moderator David Arquette and Bradley Zweig (executive producer of Mutt & Stuff) for this very special event, which also features a video appearance by Helbig and Hart. 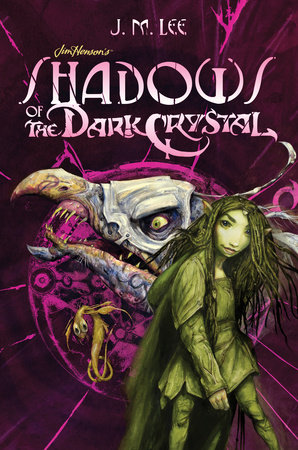 Mark McDonnell worked with the Jim Henson Company a number of years ago, creating some of the coolest DVD covers amongst over great art from them and many other companies you probably love. Check out his website and get a little of his work for your wall signed by the man himself! 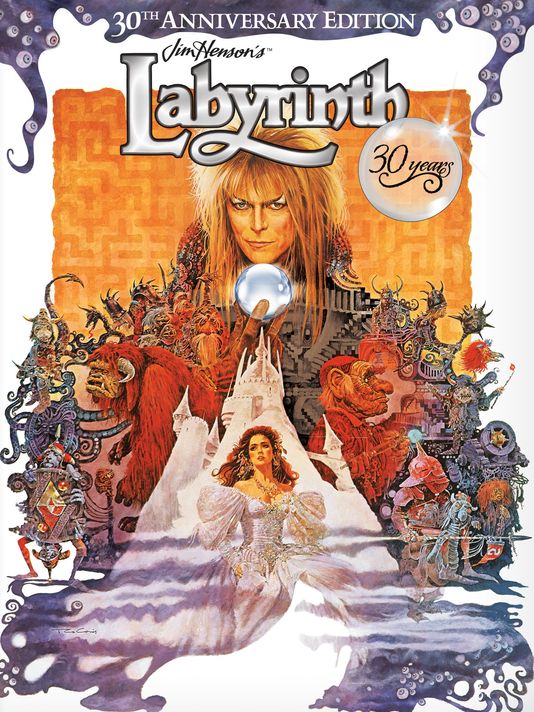 Celebrate the 30th anniversary of Labyrinth with some of the nerdiest fans in the country! Have fun seeing it on the big screen, and sing along if you want to! It’s not a sing-along version per se, but tell ’em Matt Wilkie said it was okay! (Please don’t tell them that, I don’t want Stan Lee mad at me.) 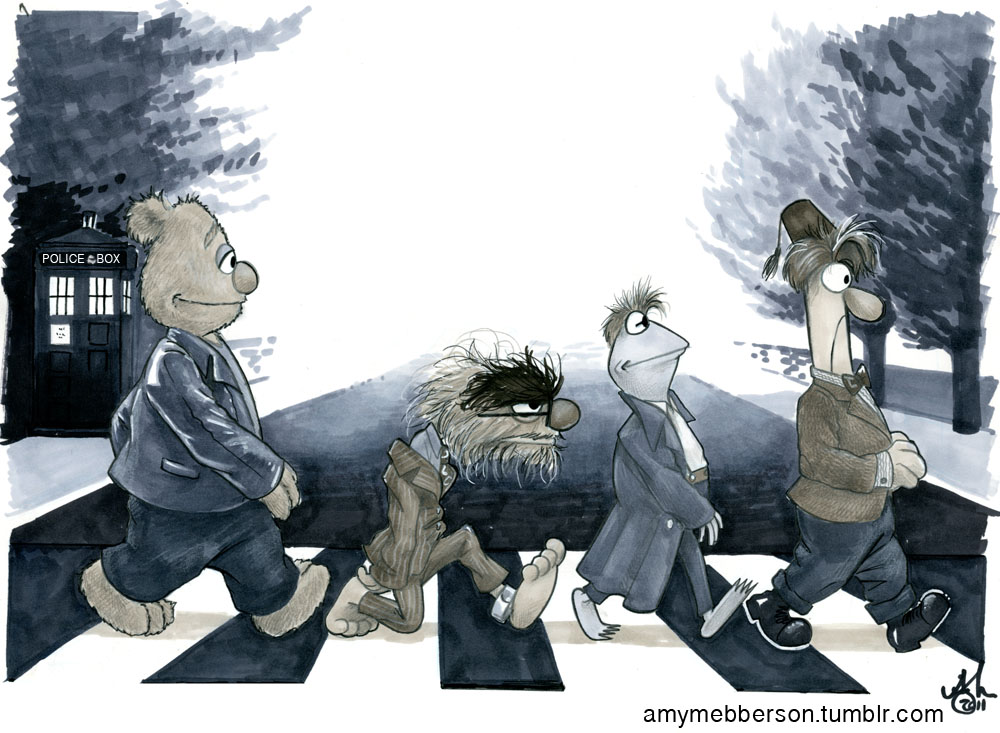 For all you art lovers, there will be plenty of Henson-related artists lending their pencils to your requests. Look for Katie Cook at Table HH-17, David Petersen at Table GG-09, and over in Exhibitors’ Alley, stop by Amy Mebberson & James Silvani‘s Table at F-07. Also, ABC will have their own booth (most likely with some Muppety goodness) on the Exhibitors’ Floor at Booth 4245, and Boom! Studios will be stationed at Booth 2229.

Also, there are always plenty of fan art pieces to be found in Artists’ Alley. It’s almost certainly worth your time to spend an hour or so digging for buried Muppet treasure amongst the Ghostbusters mashup pictures. So much mashup potential! 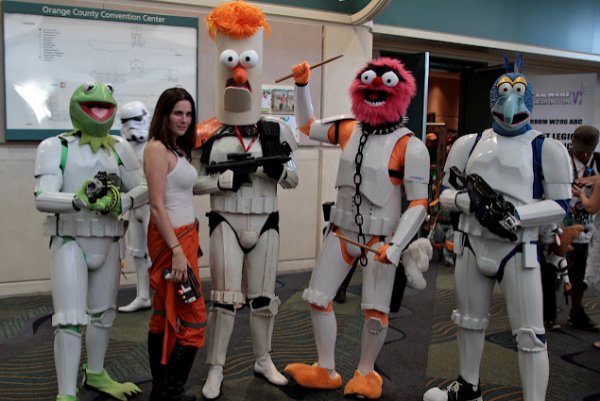 And then, of course, there’s the merchandise. SDCC is all about cross-promotion and marketing along the spectrum, so a trip to the Hallmark booth will be worth your time to get a sneak peek of what Muppet Christmas ornaments we can expect in the next year or two. WeLoveFine will be there with their geek-inspired t-shirts and we know they’re always good to hit up for the Muppet fan on your gift list. Try swinging by the Disney Booth and see if there’s anything Muppety hiding there – I know I will! And with those new Muppet action figures, Minimates, and glasses and mugs in stores now, one of the first booths I’ll be checking out is Diamond Select at Booth 2607 to try to get a preview of their line. And don’t forget to pick up your SDCC exclusive Muppet Minimates of Kermit and Miss Piggy dressed for their wedding at the Entertainment Earth Booth #2343 (Catch a sneak peek of that one here!) 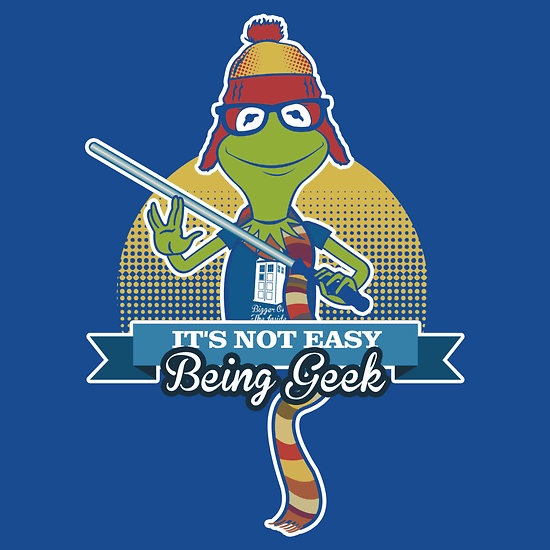 Click here to wait in line at Hall H for the ToughPigs forum!