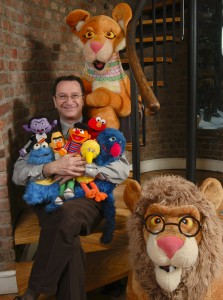 Possibly the most famous episode Norman ever wrote was the “We’ll Miss You Mr. Hooper” episode. Although the scene where the adults tell Big Bird that Mr. Hooper isn’t coming back is the one people are most familiar with, Norman believes that the episode works best as a whole. Early in the episode, Big Bird is walking with his head between his legs. When Gordon asks him why he’s doing that, Big Bird says, “I don’t know, the best answer I can come up with is ‘just because’.” The same reason is echoed later when Big Bird asks Gordon why people have to die.  Gordon uses Big Bird’s own logic: “Just because”. The scene was something Norman had written much earlier, but he could never find a place for it until he came up with the “just because” link. Norman was also proud of the other segments in the episode, which were about a new baby on Sesame Street. Once again, a concept is flipped and repeated: after Big Bird is previously told that Mr. Hooper won’t be coming back, Big Bird remarks that babies are amazing because they’re not here one day, and the next day, there they are!

Norman also spoke about the importance of not speaking down to children about the issue of death, but at the same time, realizing how they conceptualize things. To kids, something like death isn’t about grief, it’s about “What will happen to me?” That’s why the adults emphasize the fact that they’ll still be around to take care of Big Bird, and that he’ll be okay.

Yet another feather in Norman Stiles’ cap is the library of Sesame Street songs he helped to write. He was quick to credit Chris Cerf, with whom he co-wrote most of his song lyrics and all of the music, for a lot of what made them great, but he’s proud that “Telephone Rock” was the one song he wrote the lyrics for on his own. He complimented Chris Cerf by saying that he has an impeccable sense of meter while writing lyrics, and he’s incredibly clever when it comes to puns. His favorite lyric: In “Do De Rubber Duck”, Biff sings, “All around the woild, whenever folks get soiled”. “Do De Rubber Duck” was a love letter to the state room scene in The Marx Brothers’ “A Night at the Opera”, as they tried to cram as many characters into one bathtub as possible. He also co-wrote “Monster in the Mirror”, prompting us to ask what, exactly, does “Wubba wubba wubba” mean? Norman responded matter-of-factly, “It’s what monsters say.”

He also co-wrote “Put Down the Duckie”, which he envisioned as a 1940s big band-era song. He especially wanted to hear the orchestra sing/shout in the chorus. He said that the song was (and still is) used in a university class all about change (“Not the kind used at a toll booth”). The song is played on the first day, and the professor asks the class, “What is your duckie that you need to put down?”

Norman had just a few opportunities to write for Muppets outside the Sesame Street family. One was the previously mentioned Free to Be a Family, and the other is the Muppet Show pilot, “Sex and Violence”. Norman said that he felt a little intimidated by Jim and his crew, and he only contributed a few jokes to the episode. He may have choked under the pressure, as he wasn’t very proud of his work. He also wasn’t surprised when Jim didn’t ask him to join the Muppet Show writing staff.

Aside from his writing responsibilities, Norman’s main role was Head Writer for Sesame Street. As the Head Writer, he felt that his job wasn’t to suggest rewrites to his staff, but to help them fully develop their ideas at the start, leaving him to do a lot of the rewrites himself. Sesame Street writer Tony Geiss joked that Norman should be a member of the Rewriters Guild of America. When planning for a new episode, the Research Department would pull a certain number of sketches, songs, and animated segments based around the required curriculum to fill the hour, and then Norman would see how much was left to fill with new material. Usually, that left around 20 minutes for the Street scenes, which he would assign to one of his staff writers. Through most of his tenure, it was actually a policy not to write continuous stories between these scenes because they couldn’t guarantee that it would hold 3-5-year-olds’ attention throughout the episode. Instead Norman would create “through lines” to loosely connect the scenes, with episode-long storylines coming much later. Throughout the years as Head Writer, he began to slowly distance himself from writing for the show himself so he could help this staff develop their own ideas. 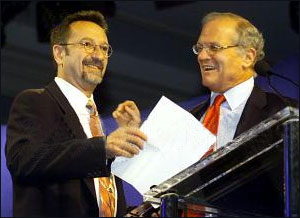 Eventually, that led to 1995, when he and Chris Cerf began thinking about leaving Sesame Street. (Can you even imagine??) They started to brainstorm about a new series for kids just a little older than the Sesame crowd to teach literacy. Their first thought was that it should take place in a library, and then Cerf thought of the pun-tastic title “Between the Lions”. So obviously, they started to conceptualize a show about lions in a library. They pitched the show to Boston’s PBS station, WGBH, who agreed to co-produce it and helped them to get onto PBS stations. Once the show was firmly in development, Norman and Chris Cerf both announced their departure from Sesame Street. Between the Lions ran on PBS for 10 seasons, and is still used widely in classrooms across the country.

So, what’s next for Norman Stiles? His upcoming venture is BTPNN, otherwise known as the Baby & Toddler Parenthood News Network. The project will be a series of up-to-5-minute videos to be available online and on mobile devices starring a crew of puppet babies hosting their own cable news network (not unlike another “Fair and Balanced” news network run by babies, although Norman claims that his babies still have a little trouble with their balance). All the babies have clever/silly pun names like Todd Lerr, Terry Biltooze, Andrea Bassinette, Di Perr, and (my favorite) Anderson Pooper.

The original idea came from Norman’s wife (and BTPNN co-founder) Ellen Dillon. As a former teacher, she wanted to know why some of her students thrived while others struggled, and to help parents help their kids to do better in school. She guessed that the split happened before they got to her class, so she investigated with the kids in the previous grade and found the same issue. She kept going back, all the way to preschool, and found the same results. After more research, she learned that 85% of the core structure of a child’s brain is formed in his or her first three years. So to help a child get a real leg-up, parents need to start exercising their kids’ minds during those crucial years.

Ellen also discovered that some working parents are just too busy to read a stack of parenting books. The mother of one of her students admitted to watching Super Nanny for advice, but even an hour-long show is a difficult commitment when you have an infant or toddler in your arms. So BTPNN will deliver only short-form sketches, featuring important tips, information, songs, jokes, and more, all available online and on your portable devices. 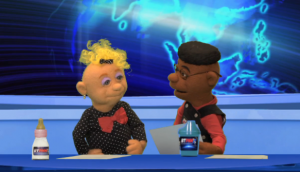 A few of the segments we saw include “Anderson Pooper 0-36”, “The Oh Really Factor” (in which Terry Biltooze interviews parenting experts and responds with a skeptical, “Oh really!?”), and a song parody of “Respect” called “Response” (“And yes, it’s a parody, Aretha”, says Norman) by Awetha Fwanklin. You might think that the baby puns would get a little tiresome, but I was pleased to see that the writing was just as clever as anything Norman wrote in his Sesame Street days.

We were also pleased to see the work of some familiar Muppet performers, like Noel MacNeal, Jennifer Barnhart, and Heather Asch, and the puppets were built by Jim Kroupa of 3/Design. Kroupa also built the puppets for Norman’s previous shows Between the Lions and Lomax the Hound of Music. Norman has such faith in Kroupa’s work, he said that if he had to have eye surgery, he’d want Kroupa to handle the procedure, as he’s so incredibly skilled at building different kinds of mechanisms with such precision.

Programs like BTPNN don’t pay for themselves. That’s why Norman Stiles and Ellen Dillon have launched an Indiegogo campaign to raise the funds. They’ve set a goal of $75,000, which they plan to use for filming new episodes and building additional puppets. Some of the incentives you can earn for donating include stickers, signed parenting books, baseball caps, boat bags, personal parent coaching, dinner with the creators, one of Norman Stiles’ hand-made lamps, and a speech from Norman Stiles himself.  We very much hope that you’ll consider donating.  Every little bit helps!

As we do with all of our interviewees, we asked Norman Stiles if he had a message to pass along to all the fans of his work. “I am so proud of all my children,” he said, “But you don’t write, you don’t visit on weekends…”

Many, many thanks to Norman Stiles and Ellen Dillon for taking the time to share their stories with us!

Click here to get your information by the pantload on the ToughPigs forum!