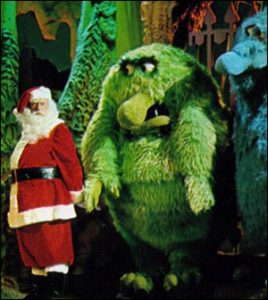 As I do every holiday season, I’ve been watching a lot of classic Christmas productions lately.  Recently, I stumbled upon something that has changed the way I think about Christmas specials… FOREVER.

I’ll start here: In 1970, the Muppets made The Great Santa Claus Switch, a TV special narrated by Ed Sullivan and starring Art Carney in the title role.  Now, when most actors play Santa, they tend to make their voice sound deep to express Santa’s jolliness.  Art Carney doesn’t really do that.  He kind of just talks like himself.  Why did Carney make that choice?  Why didn’t he do the traditional Santa voice?

The answer hit me in the face like a Yule log while I was watching The Twilight Zone.  There’s a Christmas episode from 1960 called “The Night of the Meek,” which stars none other than Art Carney.  He plays a drunk department store Santa named Henry Corwin, who just can’t get his act together, until one Christmas Eve when a magical bag full of presents falls from the sky.  While still wearing his costume, Carney hands out gifts to everyone in town, and to make a long story short, he ends up flying away in Santa’s sleigh with an elf by his side.  Rod Serling tells it better, but you get the idea. 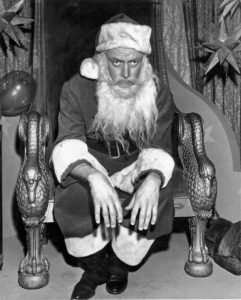 It’s not explicitly stated that Carney’s “Meek” character is taking over the role of Santa Claus.  Is he becoming the new, one-and-only Santa Claus, like Tim Allen would years later? Or is he simply borrowing the accessories for this particular Christmas so the real guy can go home early and sleep off all those cookies?

For years — years! — viewers of CBS Christmas programming were asking this question.  Finally, ten Christmases later, they got their answer, as the network presented Art Carney starring alongside a bunch of Muppet elves and Frackles in The Great Santa Claus Switch.  In other words: Yes, Virginia, Art Carney is Santa Claus.

It makes so much sense!  No, really, it does.  Trust me.  It also explains why the villain of the piece, Cosmo Scam, also played by Art Carney, is so bitter, and why he hatches his evil plan in the first place.  Cosmo is a dude who looks like Ed Norton from The Honeymooners, and he has to live in a cave under the North Pole.  Meanwhile, the slovenly Henry Corwin from The Twilight Zone, also a dude who looks like Norton, gets to sing and make toys all day.  Cosmo must be thinking, If this dummy can take over as Santa, why can’t I?  (Yes, I know his plan in the special was actually all about stealing presents.  Shut up.)

So there you have it: A watertight theory linking The Twilight Zone to a Muppet special, in a way that must have been definitely, absolutely, 100% intended by the creators of both. 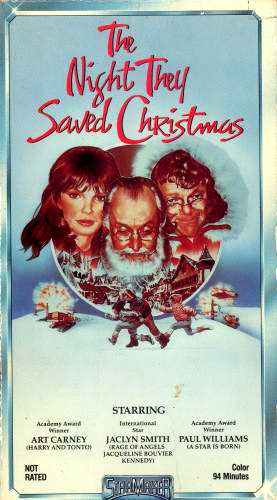 You might think that’s where this story ends.  But as you can tell by the fact that there are still more words under this, you’d be wrong.  In 1984 (another fourteen Christamases later), ABC aired a TV movie called The Night They Saved Christmas.  It’s about an oil company endangering Santa and the elves by trying to drill for oil at the North Pole.  I haven’t see the movie since I was a little kid, so I’m not sure how it ends, but let’s just assume they stage a telethon to raise ten million candy canes.

Anyway, guess who played Santa Claus in that production. I’ll give you a hint: Not Jackie Gleason.  That’s right… It was Art Carney!  And that can only mean one thing.  “The Night of the Meek,” The Great Santa Claus Switch, and The Night They Saved Christmas are all parts of a single shared universe!  It’s the only thing that could possibly mean!

Here’s something else about The Night They Saved Christmas: It features Paul Williams as an elf.  Does that sound familiar?  OF COURSE IT DOES!  Paul Williams played an elf in A Muppets Christmas: Letters to Santa in 2008!  It’s the same elf!  It has to be the same elf!  You can’t tell me otherwise!  Everything ever made is connected!

In Letters to Santa, the role of Santa Claus was played by Richard Griffiths.  So clearly, sometime between 1984 and 2008, Henry Corwin from The Twilight Zone handed the reins and the reindeer over to a new Santa.  I’d say he had a pretty good run as Santa, especially the year he brought me a Nintendo Entertainment System. 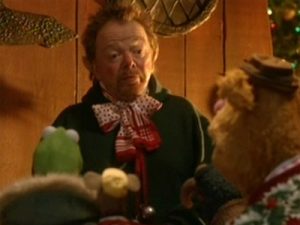 It’s also notable that Letters is the special where Fozzie sings “I Wish I Could Be Santa Claus.”  Henry Corwin once wished the same thing, and he got his wish, so I’m confident that in a future special Fozzie will get to take over as Kris Kringle.  The 2006 album The Muppets: A Green and Red Christmas includes a Fozzie track called “North Pole Comedy Club,” so clearly he was already trying to make a good impression on the current Santa.

I did it!  I have proven beyond a shadow of a doubt that four completely different Christmas productions all take place in the Art Carney Santa-matic Universe.  Please share this article with all your friends on social media, and print a copy to put in everyone’s stockings.  And come back here next year, when I’ll prove that Amy the Dancing Brick from It’s a Very Merry Muppet Christmas Movie is, in fact, one of the bricks that Macaulay Culkin throws at the burglars in Home Alone 2.

Click here to slide down the chimney to the Tough Pigs forum! 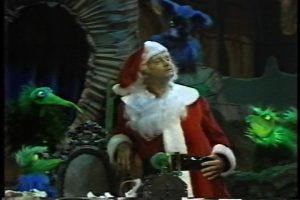