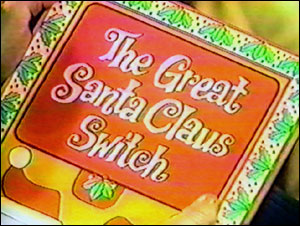 As I’m sure you recall, yesterday Anthony told you about some classic Muppet Christmas sketches from The Ed Sullivan Show. Well, Ed Sullivan was so impressed with the way the Muppets made Christmas come alive that in 1970, he let them use his timeslot to do an entire Christmas special. The Great Santa Claus Switch would be the first of approximately 837 Muppet Christmas specials, but for some reason it never quite became a perennial holiday classic. As far as I know, it hasn’t aired on television in decades, and it’s never been released on video. And that’s too bad, because it’s a lovely look at how the Muppets celebrated Christmas before The Muppet Show. With no established characters, they couldn’t just round up a bunch of Muppets and make them sing “Have Yourself a Merry Little Christmas.” They had to create a whole new story, so that’s what they did.

Ed Sullivan, who is not a Muppet, appears in the show to provide narration, as he reads the story to a roomful of kids. Anthony already touched on this yesterday, but it bears repeating: To see Ed Sullivan do anything is to be amazed that a guy with so little charisma ever became America’s biggest TV personality.

Art Carney, who is also not a Muppet, plays two roles: Santa Claus (beloved Christmas icon) and Cosmo Scam (an evil wizard with a cool name, invented for this special). Carney doesn’t bother with the usual deep-voiced, laugh-like-a-bowlful-of-jelly stuff in his portrayal of Santa. His Kris Kringle is a perfectly pleasant guy, but he’s pretty much just Art Carney with a red suit and a beard. Carney gets a little more into the bad guy role, though. Cosmo Scam is a huge meanie, who lives in a cave with a bunch of Frackles and plots to kidnap Santa Claus so he can rob all the houses in the world on Christmas Eve.

That’s right… Cosmo Scam’s hench-creatures are Frackles, a word that would later inspire the name of the Fraggles. Is that news to anyone, or did everyone reading this website already know that? Meanwhile, Santa employs a workshop full of pleasant elves, who sing as they build toys for kids. But here’s the thing about this special: While the elves are the good guys, and an elf named Fred is presented as the protagonist of the story, the bad guys are much cooler-looking puppets, and much funnier characters than the elves. So you can’t really blame the Muppet guys for cutting back to the Frackle cave whenever possible. There’s Lothar of the Magic Pot, who offers wisdom and soothsaying with a twist of sarcasm. There’s Snarl, the Frackle in the Cigar Box, a puppet that (as you already know if you’re a true Muppet fan and not some lame poseur) would later evolve into the Great Gonzo. 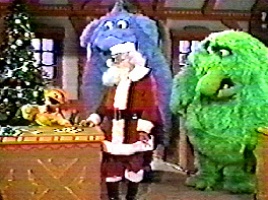 And then there are Thog and Thig, two huge Frackles who would later appear on The Muppet Show and vanish from existence without a trace, respectively. Is that because Thig wasn’t as cute as Thog? Or did it have something to do with the fact that his performer Frank Oz hated playing full-body characters? Anyway, these guys are the ones Cosmo tasks with abducting Santa from his workshop and dragging down to the cave, where Cosmo explains his evil plan: He’ll use his magic to make himself look like Santa, and then he’ll use Santa’s reindeer-drawn sleigh to hit every house in the world, and steal all their… Hmm, what valuable possessions did people have in 1970? Pet Rocks? Eight-tracks? Autographed pictures of Richard Nixon?

If it sounds like the basic premise of the Arthur Godfrey sketch Anthony reviewed yesterday, I’m sure that’s not a coincidence… This thing is basically an expanded version of the “monsters learn to love Christmas” concept. You might also compare Cosmo to the Grinch… but Cosmo’s not trying to eliminate Christmas, he’s just trying to exploit it for his own gain. Which is more evil?

Before long, Fred figures out that Santa has been replaced, so Cosmo throws Fred in another cavern dungeon and replaces him with a Frackle. But it’s pretty obvious to all the other elves that a green beaky monster is not their little pal, so eventually all the elves are thrown in the dungeon and replaced with Frackles. Now what? Everyone’s trapped in a cave! Fortunately, Santa has The Magic of Christmas up his sleeve, and he uses it to persuade the Frackles to stop being such jerks, starting with Thog and Thig, who really just want toy trucks and teddy bears, that’s all. And Fred comes up with a brilliant escape plan: He and the other elves dress as rocks so they can sneak past the guard and rescue Santa. This allows for some delightful, Muppet-worthy puns like “I used to be scared, but this costume has made me a little boulder!” 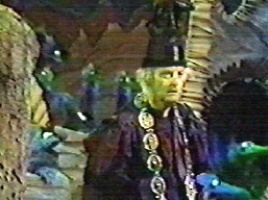 And you can probably guess that there’s a happy ending. One thing that’s interesting about this special, though, is that the bad guy is never really redeemed. That tends to happen in Christmas stories like this — Charles Dickens’ Christmas Carol being the gold standard — but Cosmo seems pretty disgusted by Christmas even as all his furry, scaly employees get converted. There is a nice little coda that plays during the end credits, in which Cosmo is sitting in the snow outside Santa’s workshop, and Thog comes out and invites him in. But Cosmo still seems to go only begrudgingly.

I don’t know where the ownership rights with this thing lie… If I had to guess, I’d say the Ed Sullivan people own the special itself. But there are no major Muppet characters in it, so I can think of no reason not to release it on DVD. Everyone knows Muppets and Christmas go together like New Year’s Eve and drunken revelry, so I’m sure it would sell some copies to classic TV buffs, Muppet fans, and Thig devotees. It’s not the best thing Jim Henson or Jerry Juhl or Joe Raposo ever did… But it’s pretty neat to watch their talents evolving. And to hear that crazy Frackle voice coming out of Gonzo.