I don’t know about you, but I am so sick of seeing the Muppets everywhere I look these days.

…is something I would never say.

If you consume media and/or spend any amount of time on the internet, I’m sure you’ve noticed that the Muppets have been everywhere you look for the past month or so.  With a new movie coming out, the characters are more visible than they’ve been since… since the last time they had a movie coming out. In fact, I strongly suspect they’ve made more promotional appearances for Muppets Most Wanted than they did for The Muppets.  Could someone count them all up for me and compare them, and present them to me as a chart? Thanks. 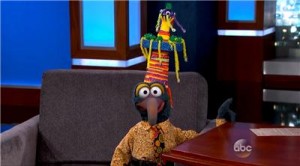 The talk show appearances are an obvious promotional strategy. Every Tom, Dick, and Sandra Bullock makes the rounds when they need to get the word out — and that word is “NEW MOVIE.”  So it only makes sense that Kermit would drop by The Tonight Show. But the fact that there are a dozen major Muppet characters means they’ve been especially ubiquitous – the Swedish Chef and Constantine were on The Chew, the whole gang was on Good Morning America.  Different Muppets have even been on the same show in the same week, like Gonzo on Jimmy Kimmel’s show one night, followed by Sam the Eagle on Jimmy Kimmel’s show the next night.

Beyond all this, some of the most exciting and delightful Muppet appearances have been the ones that were less conventional.  When Fozzie showed up on The Arsenio Hall Show, he wasn’t a guest, he was the announcer.  The Muppets popped up repeatedly over a day of programming on QVC.  And Gonzo is scheduled to appear at an upcoming NASCAR race, of all things.  A NASCAR race!

So, the Muppets are everywhere, and all of these things are great.  They’re bringing joy on a daily basis to us Muppet fans, and they’re making it difficult for the average person not to know there’s a new Muppet movie. No one is ever allowed to say ever again that Disney doesn’t want to spend money on marketing the Muppets.

But here’s a thought: What if the Muppets could make these kinds of appearances even when they weren’t promoting a movie? 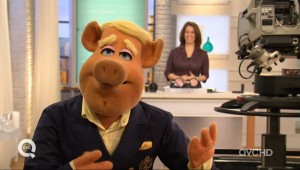 Not at this frequency or volume, of course.  As sad as it will be, I do realize that shortly after March 21st, there won’t be daily Muppet appearances to watch, and it would be unreasonable to expect otherwise.  And that’s fine.  But it would be terrific if they could come out to play occasionally between now and the next movie.

So Disney, if you’re reading this (and I mean employees of the Disney company, not Mr. Walt Disney): Please let the Muppets run free in the pop culture landscape all the time.  Don’t just let them out of their boxes when they’re pushing a movie, then lock them back up when the Blu-ray is out and the hoopla machine is cooling down.

To be fair, the occasional appearance does happen.  Remember Kermit’s very brief cameo in an episode of 30 Rock a while back?  That’s exactly the kind of thing I’m talking about.  Kermit only had a few seconds of screen time, but it was wonderful to see him on TV, and we went nuts for it.  In an ideal world, we would get a few of those a year while we wait patiently for The Next Big Muppet Project. 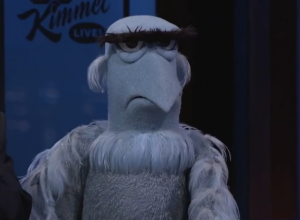 And in an ideal world, it wouldn’t always be Kermit.  How about Sam the Eagle making a surprise appearance to deliver an editorial on Saturday Night Live‘s Weekend Update?  How about Fozzie hosting a standup special on Comedy Central (Does Comedy Central still show standup)?  How about Walter co-hosting a podcast?  How about Sweetums throwing the first pitch at a major league baseball game?

And how about all of these happening while the next movie is in development?  I know it would cost money to pay the Muppet performers and keep Sam’s feathers glued on and whatever.  But think of the benefits!  Not only would it make the fans happy, I guarantee any such appearances would immediately be all over the internet, reminding people that the Muppets still exist and that everyone loves them.  It’s free publicity! Except for the parts that cost money.

Does I sound ungrateful?  Like, now that my precious Muppets are back in the spotlight, I’m taking it for granted and all I can do is demand more, like a whiny little child?  I don’t mean to come across that way.  It’s just that I love those guys, and I like having them around.  You know what I mean. 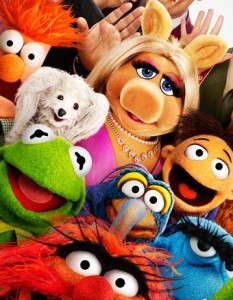 Click here to be ubiquitous on the Tough Pigs forum!

Don’t Make “The Muppet Show” Again, Make This Show Instead