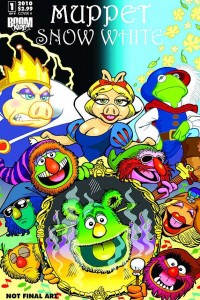 Connecting the dots from Muppet Robin Hood to Muppet Peter Pan to Muppet King Arthur, the logical step for the next Muppet comic book from BOOM Studios would obviously be Muppet Snow White. Obviously.

Jesse Blaze Snider (according to Snider, “Blaze” is actually his legal name… who named this kid??) will be handing the writing duties. His previous comic book credits include “Deadpool” and “The Incredible Hulk” for Marvel Comics, and a miniseries for DC Comics called “Dead Romeo”. He also has a nifty mohawk.

Shelli Paroline, who you may remember as the artist who stepped in for Roger Langridge on The Muppet Show Comic Book #0 (the Pigs in Space issue), will be tackling stuff on the artsy side of things. She’s taking over for the previously-announced James Silvani, who is busy finishing up his duties on Muppet King Arthur.

From the looks of the cover above, Spamela Hamderson will be Snow White, Miss Piggy will be playing the Queen, Fozzie as the mirror on the wall, Kermit as the dashing prince, and the Electric Mayhem as the dwarfs (only six dwarfs including Lips? Maybe they’ll get a mystery seventh dwarf will rock to with them). That’s good casting, but it’s a shame there aren’t more female Muppets to pull from. I’m wary as to how interesting Spamela will be as our lead heroine.

Muppet Snow White will be in stores in April, 2010!

Click here to take apples from strangers on the ToughPigs forum!

Preview: Power of the Dark Crystal #5