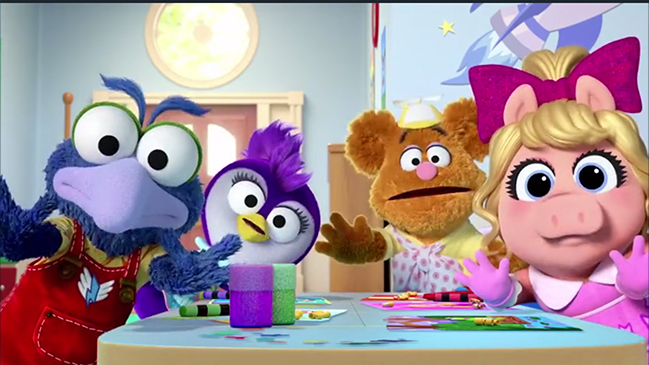 Here at ToughPigs HQ, we’re no strangers to reviewing stuff made for kids.  I feel like every few months, we’ve got another TV show or special or book or set of Pogs that requires us to step away from our usual adult POV and into the shoes of a toddler.  Which, by the way, are very tiny shoes.

The new Muppet Babies premiered today, and I found it perfectly enjoyable.  But only while wearing those undersized shoes.  And like a pair of sneakers made for children, they’re brightly-colored, bedazzled with cartoon characters I enjoy, and definitely not the sort of thing I could wear for more than a few minutes at a time.

The hard part for me (and for many of you too, I presume) is the reminder that we posited not too long ago: The new Muppet Babies is not for us.  And that’s okay.  This is the kind of show that would suffer if it tried too hard to cater to the grown-ups who might watch for a few episodes and then leave the TV on for their little ones.  That said, there’s just enough in there to keep the adults’ interest piqued, and even more to raise an eyebrow due to all the unfamiliar changes. 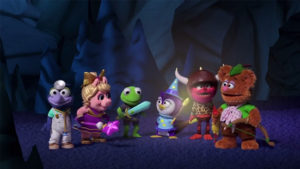 Here’s the stuff that didn’t change: Babies Kermit, Piggy, Fozzie, Gonzo, and Animal are in a nursery (with no mention of having real homes to go to at the end of the day) overseen by a headless Nanny.  They use their imaginations to play and learn and sometimes sing songs.

Here’s what changed: The cast is practically cut in half – goodbye Scooter, Skeeter, Rowlf, Bunsen and Beaker – with Summer the Penguin inserted in because the show needed more purple.  The pace is a bit quicker to help keep up the energy and to keep the interest of kids growing up in 2018.  The show is CGI, which takes a little getting used to, but is ultimately impressive, especially with the various materials used to fill in the backgrounds during the imagination sequences.

One of the bigger changes, in my opinion, is the unending positivity.  The old Muppet Babies characters had such drastically different personalities, they inevitably ended up butting heads a lot.  Piggy was full of herself, Skeeter was brash, Animal was destructive, Fozzie was dumb.  Some of those elements are still there, but they’re not really a source of friction anymore.  Instead, it’s as if some executive at Disney decided that kindness was more important than character conflict, and the bickering was replaced by endlessly smiling faces. 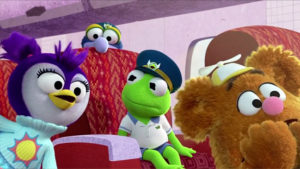 Not that kindness isn’t important – it totally is, especially for kids in this show’s demographic – but at times their actions are a little too saccharine for my tastes.

With only two 11-minute episodes in the premiere, we didn’t get to see a whole lot of character work, so it’s hard to really nail down who these new Muppet Babies are, and how they differ from the ’80s versions we’re more familiar with.  Kermit’s still the de-facto leader, in that generically goofy sort of way.  Piggy is way less antagonistic, playing up her ego more than her anger.  Fozzie is still cracking jokes every five seconds, but he’s picked up some confidence, making him a lot less pathetic.  Gonzo is full of non-sequitors and isn’t treated at all like an outcast.  Animal is aged up a little, no longer the baby in diapers, and is more of an ADHD “wild” kid.  Summer is… a penguin.  Man, I couldn’t tell you two things about her.

By the way, Gonzo is totally going to be the favorite of this show.  He’s hysterical, in that weirdly confident (confidently weird?) way. 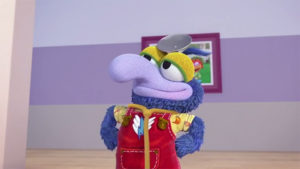 The first of the two episodes is “Sir Kermit the Brave”, in which the gang explores a dark closet that may also be a cave with a dangerous dragon inside.  Each of the Muppets chooses an RPG character: Kermit’s a knight, Piggy’s a fairy queen, Summer’s a wizard, Fozzie’s an archer, Animal’s a troll, and Gonzo is (hilariously) a veterinarian.  The kids are on a search for Miss Nanny’s lost cardigan, and the dragon is quite cleverly made out of the same cloth material.  Anyway, it turns out that our fearless leader Kermit is afraid of the dark, and now his life is full of a constant sense of terror (not really, but wouldn’t THAT be interesting??).

In an interesting move, the dragon is voiced by Crazy Ex-Girlfriend star Rachel Bloom, which is a casting choice that kids certainly don’t care about.  Her voice isn’t really recognizable (my wife, who is a huge Crazy Ex-Girlfriend fan, couldn’t tell at all), and although she sings a song, she only gets a couple lines – the rest is sung by Kermit.  It seems like a waste of a perfectly good guest star (who, by the way, should be working with the actual Muppets, and not their infantile counterparts). 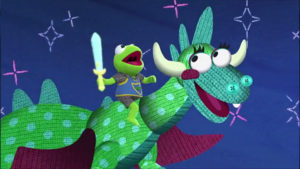 On the “successful reference for the adults” side, the episode also features a great homage to both the original Muppet Babies and Raiders of the Lost Ark.  This series likely won’t have too many references to classic films like the old show, but it’s still nice to see that double-whammy of a nod.

The second episode, “Animal Fly Airplane”, is all about Animal acting “too wild” and being untrustworthy to pilot an imaginary airplane.  Most of the characters get fun things to do, like Fozzie Bear watching “The Fozzie Bear Show” as his in-flight entertainment, Kermit acting like he has a concussion, and Gonzo and Camilla as flight attendants.  The female characters get slightly less to do, as Piggy acts like she’s in first class (when asked to take a turn as the pilot, she retorts, “pigs don’t fly”), and Summer repeats her forced catchphrase “icicles” (in lieu of “cool”… because she’s a penguin). 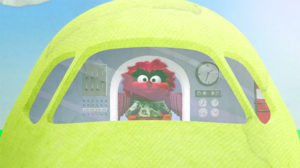 Anyway, this is a good example of why a (slightly) older Animal is a good change. The old Animal-in-a-bonnet was pure id, with too much potential for annoyance.  This one is actually a lot closer to his adult puppet counterpart, running wild but coherent enough to know when he’s making a bad decision (whether he cares or not is another story).  It almost makes you think that Animal just stopped maturing after this age, and is currently frozen as a child in a monstrous body.

All in all, the new Muppet Babies is cute and fun, and if I was forced to watch every episode (say, for reviews on a Muppet fan site), it would be far from the worst kind of torture.  But those tiny kids shoes are feeling mighty tight, and I can only keep them on for so long before taking them off and appreciating them from afar.

I think this metaphor got away from me.  What I’m trying to say is that the show is good, although (as previously and repetitively established) not for me.  But I’m glad that younger Muppet fans have a quality show to enjoy.  A show which also features a penguin, for reasons. 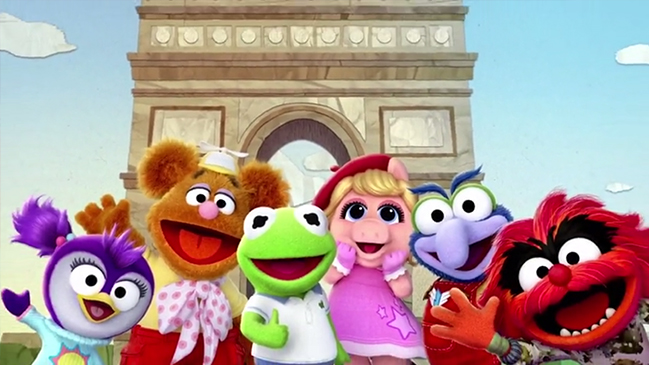 Click here to go to veterinary school on the ToughPigs forum!