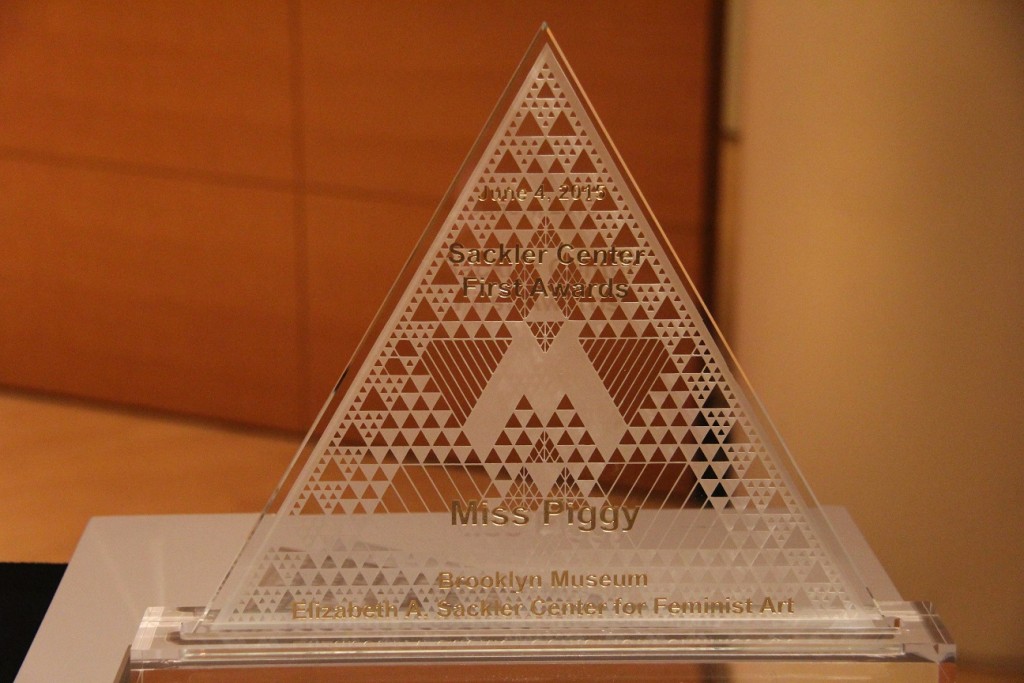 The Elizabeth A. Sackler Center for Feminist Art at the Brooklyn Museum is dedicated to increasing awareness of the importance of feminism.  The institution’s Sackler Center First Award was created to honor women who have made major cultural contributions, and past honorees include Supreme Court Justice Sandra Day O’Connor, journalist Connie Chung, author Toni Morrison, theater director Julie Taymor, and attorney Anita Hill.

This year they chose to give the award to a pig puppet.

A few people expressed surprise when Miss Piggy was named as this year’s honoree, for various reasons.  First of all, it’s hard to overlook the fact that she is, in fact, a fictional character, and a talking animal at that.  Also, her behavior over the years hasn’t exactly been a perfect model of feminism — she’s been known to throw herself at a handsome man, and abruptly turn to violence to solve conflicts.  Then there’s the fact that she’s always been played by a man.

Obviously, the Muppets knew these concerns were being raised, and this week Miss Piggy wrote a piece for Time magazine’s website explaining why she deserves the award.  Last night, Piggy was presented with her award in a ceremony at the Brooklyn Museum, and almost all of the points above were addressed… but the biggest priority at the ceremony was just letting Miss Piggy be herself. 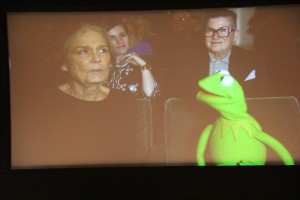 The evening began with feminist icon Gloria Steinem chatting with attendee Kermit in the front row of the auditorium.  The audience loved it, and Kermit’s answers to Steinem’s questions felt like a nice combination of scripted and spontaneous.  When Steinem inevitably asked the “How are things going with Miss Piggy?” question, Kermit replied that they’re fine, though they’ve been going through a rough patch… since they met.  But he wanted all to know how proud he is of Piggy: “No one has broken through more glass ceilings than her!  And no one has swept up more broken glass than me.”

When asked if he’s a feminist, Kermit said of course he is, but he would have claimed to be even if he wasn’t, given the venue.  This prompted Steinem to opine that we need more feminist frogs in Washington, which led Kermit to reveal that he’s a member of the Amphibitarian party. (Didn’t he use to say he was a Flippertarian? I wonder what made him switch.) 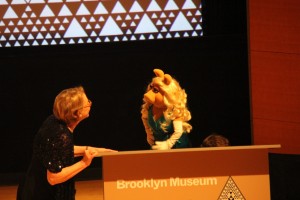 After a while, Elizabeth Sackler herself took the stage, introduced some special people in the audience, and prepared to present the award to the pig of honor.  But where was said pig?  Sackler couldn’t find her anywhere, so she asked if Kermit would be willing to accept the award on Piggy’s behalf.  Naturally, that’s when Piggy appeared, popping up behind a lectern.  Sackler showed Piggy the award, which she was appreciative of, even though there wasn’t a picture of her on it.  Sackler said they wanted to give Piggy the First Award because she’d never won any awards before, despite all the movies and TV shows and appearances she’s done.  Miss Piggy is worthy of the award, Sackler said, for her spirit, determination, grit, humor, confidence…  (“Go on,” said Piggy.)  She’s taught millions of us that we should follow our dreams and that beauty comes from within.

Miss Piggy gave an acceptance speech during which she thanked everyone for the award, “truly a major highlight in the highlight reel that is my life!”  During the speech, Piggy herself brought up “the elephant in the room,” being careful to note that she was not referring to Ms. Sackler.  No, she was talking about the fact that some people have suggested she shouldn’t be given the award because she’s “not quote-unquote a real person.” But this is ridiculous: “What, am I just a figment of everyone’s imagination?!”  She also acknowledged that in the past, she herself has claimed that she’s not a feminist.  But hey, people can change their minds, and as of today Miss Piggy has declared that she is now a feminist.  It’s official! 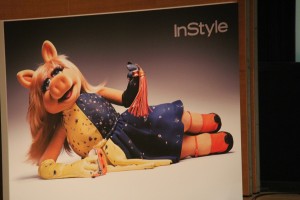 Then it was time for the “Miss Piggy career retrospective” video.  Miss Piggy has had a long career, which was good because that meant the video gave Eric Jacobson some time to rest his arms.  The video compilation had some quick montages, as well as a bunch of longer clips divided by decade.  And because I’m committed to Muppet journalism, I noted all of the longer clips:

1970s: From The Muppet Show — “I Won’t Dance,” “Don’t Go Breakin’ My Heart” with Elton John, Kermit firing Piggy, “Some of These Days,” the Pigs in Space sketch where Piggy moving around unbalances the ship, and “I’m a Woman” with Raquel Welch.  Kermit and Piggy talking to a veterinarian on The Tonight Show.  “Never Before, Never Again.”  Kermit and Piggy at the 1979 Emmy awards, reading the rules.

1980s: “The First Time It Happens.”  The Joan Rivers scene from The Muppets Take Manhattan.

2010s: Kidnapping Jack Black in The Muppets.  “Me Party.”  Piggy on the red carpet at the BAFTAs.  “The Weight” from Late Night with Jimmy Fallon.  A Wonderful Pistachios commercial.  “Something So Right.”  A scene from a Michael Bublé Christmas special.  A Queen Latifah Show appearance.  A “Muppet Moment” from Disney Jr.  The promo for “Moi by Miss Piggy.”

And to top it all off, a montage of moments set to Piggy singing “I Will Survive” from The Fantastic Miss Piggy Show. 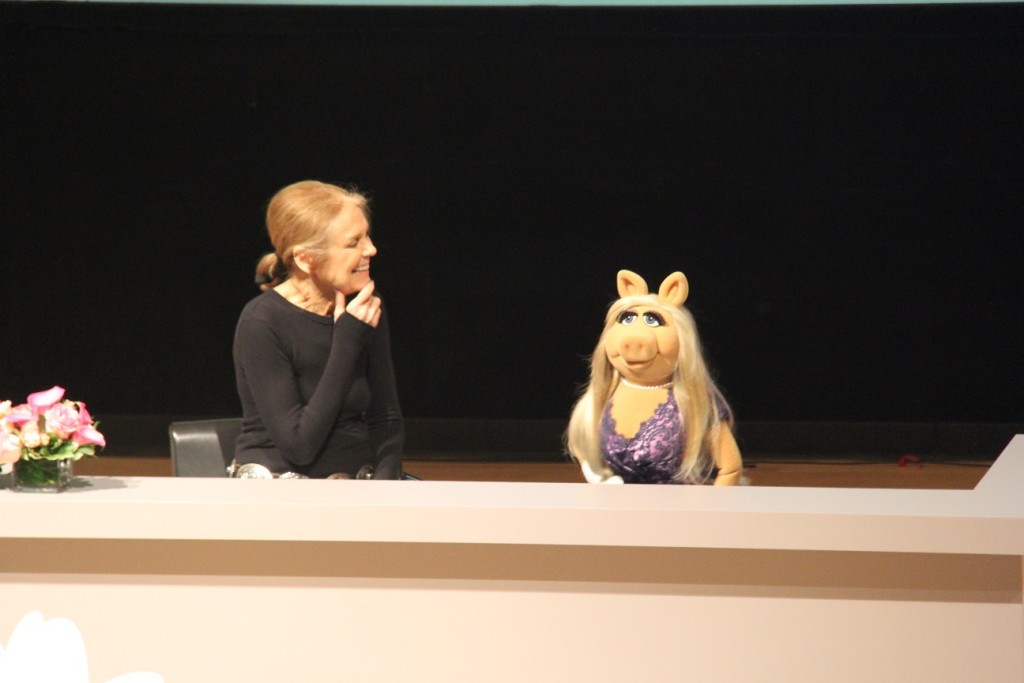 After the video — during which Piggy apparently had time to change and straighten her hair! — it was time for the highly anticipated conversation with Piggy and Gloria Steinem.  This mostly consisted of Steinem asking Piggy questions, and Piggy responding with answers that, like Kermit’s, felt prepared but pleasantly loose.  One moment felt particularly spontaneous: Steinem said that while some people doubt Piggy’s feminist cred because sometimes she bats her eyelashes at men and sometimes she does jujitsu, Steinem thinks “that’s the whole point.  We can be whoever we fucking well please.”  Just a little treat for the Brooklyn Girl Scouts and various community children’s groups in attendance!

Steinem asked: Why is she Miss Piggy and not “Ms. Piggy?”  Piggy has nothing against “Ms.” but she’s been established as “Miss” and it’s hard to change a brand from a marketing standpoint.  She’d prefer it if people called her “Your Highness” anyway.

Steinem said: She and Miss Piggy share a secret, which is that they both tap dance. Sometimes in elevators, Steinem tap dances to the Muzak.  Piggy marveled, “You’ve kept that a VERY good secret!” and agreed that the two of them can dance together sometime.  Also, she wants to slip into an elevator someday and catch Steinem in the act.  Piggy wants to teach Steinem her “special kick-step,” which is great for debating chauvinists.

Steinem asked: Are there things about you people don’t know?  Piggy doesn’t like to talk about growing up on a farm… but she might if somebody buys the book rights to her life story.  Also, early in her time in New York, she worked as a glove model and did some unfortunate ads for a company that sold pork products.

Steinem asked: Who are Piggy’s influences?  Piggy likes the stars of the Golden Age of Hollywood — Audrey Hepburn, Grace Kelly, Lucille Ball, and Norma Desmond — all of whom she considers feminists in their own way. 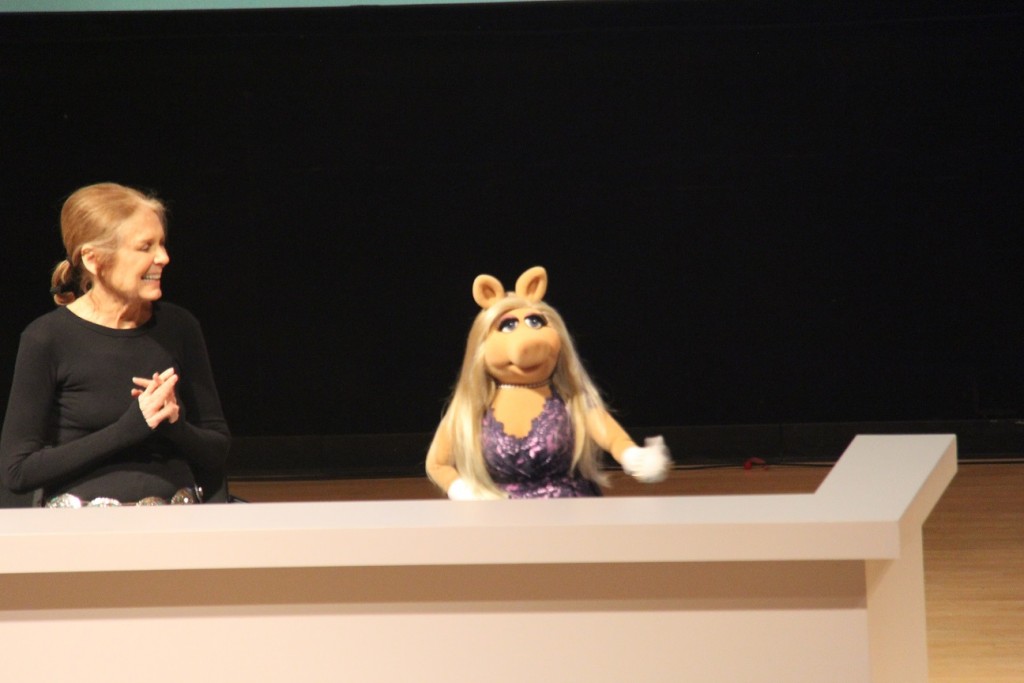 Steinem asked: What’s the hardest part of being a woman in Hollywood? Competing against other women.  Piggy said, “I wish we could all just share all the starring roles!  As long as I get top billing.  And points on the gross, too.”

Steinem asked: What’s the hardest part of being a pig in Hollywood?  It’s that species-ism.  The Academy of Motion Picture Arts and Sciences has never recognized a pig or any other farm animal for any Oscar.  That’s why Piggy doesn’t have one.

Steinem asked: What impact has Piggy had on Kermit?  Piggy was happy Kermit was present to see her get the award, and grateful for the moral support… but Kermit wouldn’t be here, or anywhere, without her.  “Let’s face it: I’m the Muppets.”

Steinem asked: Does Piggy want to be married to Kermit? Piggy said if she wanted to, she would be.  And if she doesn’t, she won’t be.  “I mean, he hasn’t asked me to marry him yet, but that’s beside the point.”

Steinem said: You have realized your dreams, and you’re an example to all of us, so can you give us some advice on how we can realize our dreams?  Piggy said, “Well, Gloria, I hope one day you do realize your dreams.  It all starts with believing in yourself.  If you believe in yourself, fooling everyone else is easy.  That’s it.”

Steinem told Piggy she’ll now have a place in the museum alongside the previous honorees, to which Piggy replied, “Is it like a timeshare, or do we all bunk together?” Then she speculated about having a slumber party with the other women — painting their nails, doing each other’s hair, and complaining about men. (Is that an un-feminist thing to say? I can’t decide.)

As the conversation wound down, there was an odd moment where Gloria Steinem told Piggy that she’s not getting a statue, but the real Miss Piggy is going to become a permanent part of the museum.  Piggy reacted with bewilderment, but I think that was their way of announcing there’s going to be a Piggy puppet on display at the Brooklyn Museum without coming out and telling Piggy she’s a puppet.  Then Elizabeth Sackler returned to the stage to bring Piggy’s award over to her, and then they covered her up with a big backdrop from her InStyle photo shoot (can’t let anyone see the puppeteer escape!), and that was that. 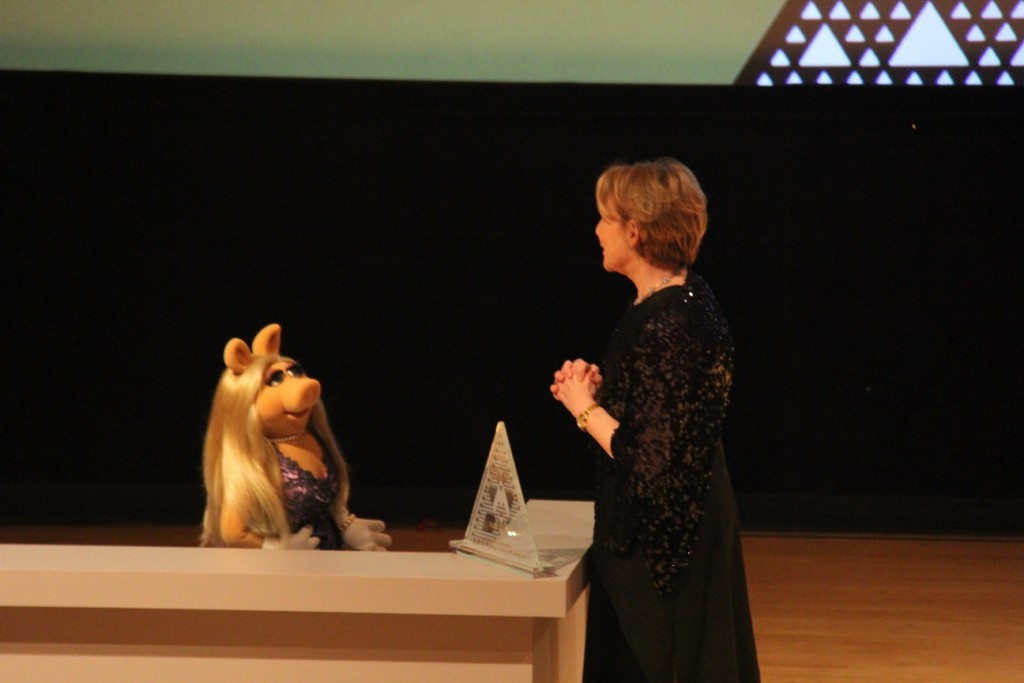 Miss Piggy may not be the ideal feminist role model.  Actually, she’s definitely not the ideal feminist role model.  But I have to think that if a human performer had a career like hers, no one would question giving her an award like this.  So who cares if the award is going to a pig this time?  She happens to be a pig who’s brought a lot of joy to a lot of people over the years, and it’s okay for the Sackler Center and Gloria Steinem to show that they have a sense of humor.  They’ll give the award to a real person next year.

Over on the Tough Pigs forum, we’ve been talking a lot lately about the lack of female Muppets and how the new TV series represents a chance to bring a few new female characters into the ensemble.  Maybe Miss Piggy winning this award will help the Muppet people realize the opportunity in front of them.  They can help the feminist cause in their own foam-and-felt way by presenting more female characters who, like Piggy, have strong personalities, and who girls and boys of all ages can cheer for.

Now, who do we talk to about changing the rules to make Miss Piggy eligible for an Oscar?

Here are some video highlights via AP:

Thanks to Tough Pigs’ ace photographer Matthew Soberman for images! Click here to sit behind a desk with Gloria Steinem on the Tough Pigs forum! 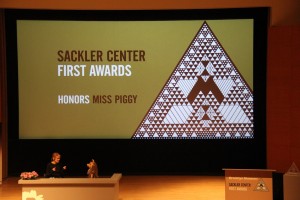