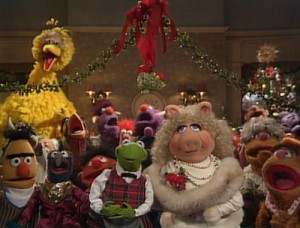 To me, the most important thing about Christmastime is about spending time with the ones I love. And when they’re finally sick of me, it’s about watching A Muppet Family Christmas. I mean, what’s not to like? It’s got a singing snowman, an icy patch, the slickest turkey since Donald Trump, and best of all, the Muppets, the Sesame Street gang, and characters from Fraggle Rock coming together to celebrate the holiday. And isn’t that the greatest gift of all? But since 2012 is the special’s 25th anniversary, I decided to give back by giving it the greatest gift possible: the title of The Greatest Muppet Christmas Special Ever. And I didn’t come by this decision lightly. Here I have assembled a collection of some of the most notable Muppet Christmas specials, a veritable “Myrrh-derers Row,” as it were, and I have systematically broken down the arguments as to why A Muppet Family Christmas is better than each of the following.

DISCLAIMER: For the sake of time, I haven’t included every Muppet Christmas special. If there’s a reason why you think The Great Santa Claus Switch, The Christmas Toy, Elmo’s Christmas Countdown, or any other special not mentioned here is superior…actually, I don’t have a joke here. I would love to hear your reasons why. 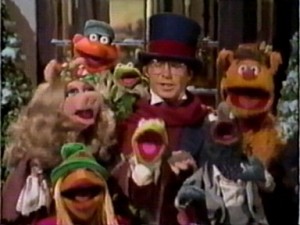 John Denver & the Muppets: A Christmas Together

Let’s start off with The Muppet Show gang’s first yuletide special. Effectively, it’s an extended Muppet Show episode with a number of songs featuring their co-star, John Denver. And there’s a reason Denver’s name comes first in the title: he appears in all but one musical number during the special. It genuinely feels like Denver is driving the show, and that’s why A Muppet Family Christmas is better: it’s all about the Muppets. There is one thing that this special has that A Muppet Family Christmas doesn’t: The Twelve Days of Christmas. It’s become famous for a reason. But A Muppet Family Christmas has the Electric Mayhem singing the best version of Jingle Bell Rock ever, and Denver and the Muppets still have to contend with Bob and Doug McKenzie’s version of the carol on my iPod. 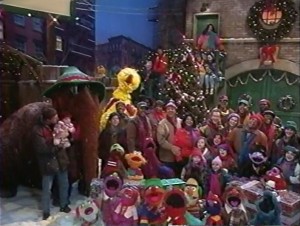 First of all, if they’re trying to be honest, it should be titled Elmo Ruins, Then Saves Christmas. Coming out in 1996 (the same year as Tickle Me Elmo’s debut, which made/ruined quite a few Christmases that year), the show follows Elmo as he receives a magic snow globe from Santa, and wishes for it to be Christmas every day, only to find that when a holiday is every day, it isn’t as special anymore. Plus it really cramps Independence Day’s style. A Muppet Family Christmas tackles this in one line, delivered by Kermit: “Life would pass by in a blur if it weren’t for moments like this.” We need the blur to have the special moments. Yes, Christmas is special, but if every day is special, no day is. And yes, I just realized I pretty much copied that from The Incredibles. But it’s Disney, so I guess that it’s okay. But there is Moo-Bunny, so it’s got that going for it. 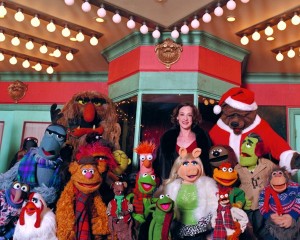 Okay, I’m cheating a bit on this, given that it’s a TV movie and not a special per se. For those who don’t know this one, the Muppet Theater is in jeopardy, Kermit mopes around for a while, and we see what happens when the Muppets aren’t together, and the theater is eventually saved by someone other than Kermit. This is the one without Jason Segel. Yes, despite its similarities to a certain film released nine years later, this one isn’t as strong. To be honest, I wasn’t a huge fan of it when I first saw it in 2002, and I find myself liking this one less and less as time goes on. The story is a virtual clone of It’s a Wonderful Life, a storyline copied by many TV shows for their Christmas shows, only it’s the Muppets, so there are quite a few celebrity cameos, which are cute, but the special takes the gang too far out of their element for my taste. Yeah, I’ll take Bert dressed as a woman over Cirque du So Lamé any day. 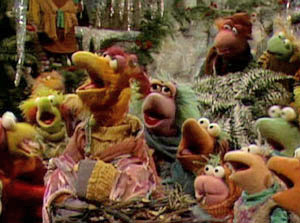 The Bells of Fraggle Rock

Getting the other cheat out of the way, this episode of Fraggle Rock began season three, which normally began in January, so the schedule was pushed up so this could premiere Christmas Eve, 1984, and it would air on HBO every year until the show ended. Given that it was given a special airdate and was repeated multiple times, it could technically count as a special. In this episode, Gobo learns the importance of the Festival of the Bells, and that holidays are important to keep people happy through the long winter. And it’s also the reason that Miss Piggy is hell-bent to get to Grizzly Farms, having mud splashed on her, getting blown away in a snowstorm, and generally risking life and limb to be with the frog she loves on Christmas Eve. And there’s a bunch of other messages in there, too, so it wins on volume. 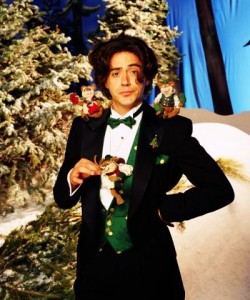 Mr. Willowby and a family of mice both seek the perfect Christmas tree in the craziest tree-related story this side of Clark Griswold. Believe me, this one’s funny, but not for the usual reasons. Everything in the story happens too conveniently, the stakes are never raised high enough for anything to really matter, and Robert Downey, Jr.’s performance seems to me like his response after the director yelled “more whimsy!” one too many times. At least A Muppet Family Christmas’ comedy is intentional. And while Stockard Channing plays a fun Swedish maid, the Swedish Chef confuses Sprocket with a turkey. Which one would you rather watch, you turkey? 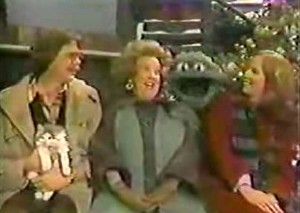 I don’t really need to make an argument here. Our own Joe Hennes and Ryan Roe already did that for me. 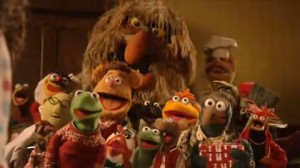 A Muppets Christmas: Letters to Santa

So. Gonzo winds up getting three letters intended for Saint Nick, and recruits Kermit, Fozzie, Rizzo, and Pepe to help him get to the North Pole to deliver the letters in time. First of all, this was 2008, so I’m pretty sure Santa must have had email by this point. But Emails to Santa doesn’t make for an exciting Christmas special. It’s inoffensive enough; I’m just not a big fan of sad Gonzo for long periods of time. I’m not saying that he can’t have emotional moments; it’s just that the special has Gonzo worried or sad most of the time. Gonzo is the benevolent madman of the group. He’s the resident daredevil, embracing the weird and wonderful, while also being a thoughtful philosopher. It’s okay to show him being emotional, but the emotions can’t be maudlin all the time. I’d much rather see him on the verge of going pollo-a-weirdo against a turkey vying for Camilla’s affection. 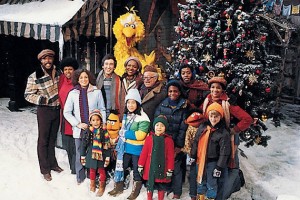 Okay, the last two are the tough ones, but I’m not a ToughPig for nothing. I figure the next two really don’t need to be summarized, as they are immensely popular. This was one of my favorites from childhood, and upon a recent re-watching, I was reminded why I love it. But I realized something: there is an unusual amount of passive-aggressiveness in this one. And I’m not just talking about Oscar trying to shake Big Bird’s faith in Santa, only to feel bad when Big Bird runs away, and upon finding him again, doing the same thing with the Easter Bunny. I’m actually talking about Bert and Ernie’s storyline. Now don’t get me wrong, the story of sacrifice just to put a smile on the other one’s face is heartstring-tugging. Rather, I’d like to talk about the gifts themselves: the soap dish for Rubber Duckie and the cigar box for Bert’s paper clip collection. The ideas for these gifts come after finding the other’s belongings just lying about. Bert is soaking in the tub when he almost slips on Rubber Duckie, and Ernie almost steps on one of Bert’s paper clips. Isn’t getting these gifts almost saying, “stop leaving your stuff lying around, you could lose them?” A Muppet Family Christmas is far more charitable to its characters. Robin gets something he thinks is cool from the Fraggles (it’s a Fraggle pebble, so yeah, it is cool), but embraces the spirit of “passing it on” and gives it to Grover without a second thought. And if that isn’t a true blue crossover, I don’t know what one is. But here comes the hardest part of my job… 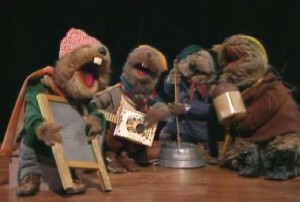 This is going to be tough, but I’ve come this far, haven’t I? Okay, let’s see what I can compare, sinister band, no, a talent competition, no…oh, I’ve got it: the relationship between mothers and sons. Believe it or not, there’s a lot more that Alice Otter and Ma Bear have in common than you think. They both are willing to give up so much (the money brought in by Emmet’s odd jobs and three months of surfing lessons) to give their sons the Christmas they can only dream of. But where Alice’s sacrifice will bring music back to both their lives, Ma gives up just a bit more: the Christmas in Malibu she wanted (and the nice, quiet Christmas that Doc wanted). She only finds herself later enjoying the time she spends with her son, and eventually learns to accept his friends (or at least say they’re nice weirdos). The fact that both these mothers are willing to give up so much is heart-warming, but welcoming and embracing Fozzie’s new family gives her the slight edge. Of course, both of these specials are essential holiday viewing, and in the spirit of the season, I give Emmet Otter’s Jug-Band Christmas the title of The Second Greatest Muppet Christmas Special Ever.

So there are my arguments, but I’m more interested in what you think. Does A Muppet Family Christmas reign supreme, or does Christmas Eve on Sesame Street or Emmet Otter’s Jug-Band Christmas top your Christmas list? Or is it another special entirely? Or do you skip the specials and go straight to The Muppet Christmas Carol? Discuss it with your friends and family, or with us on the ToughPigs forum, and I hope whatever you celebrate this time of year, and however you celebrate it, that you enjoy the time you spend with the ones you love. 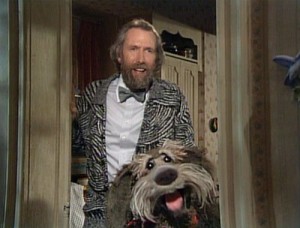 Click here to shop for green fuzzy flipper slippers on the ToughPigs forum!