This piece is taken from a thread I tweeted on January 19, 2022. For the purposes of this feature, I have taken what I originally wrote and have expanded upon it further.

Fraggle Rock is officially back, and folks have been rejoicing since the episodes dropped on Apple TV+ at the end of last week. It feels like just about everyone is psyched to be back to the Rock!

The lead-up to the release of this series was much anticipated by fans and casual viewers alike. This was a project that had been promised to us time and time again over the years, only to always have potential productions fall by the wayside. We were all too used to being disappointed by announcements of celebrities tied to anything Fraggle-related (here’s looking at you, JGL) and for those projects to inevitably be cancelled. So when we heard about another production, this one a TV series, moving forward, we were hesitant to show any optimism. But when all us fans received the first full length trailer at the start of this month, we lost our minds. The colors! The music! The puppetry! The special effects! The returning characters! The new characters! Broadway sweetheart Lilli Cooper! Everything seemed so great and wholesome! We couldn’t wait to consume every second of this program!

Now, being a human in 2022, I spend a lot of time on the Internet. Mostly this is fine – the Internet keeps me connected with my loved ones (which is pretty important during this time we’re living through) and keeps me updated on pieces of pop culture that I enjoy. Plus I’m addicted to it, so what are ya gonna do.

Once reviews of Fraggle Rock: Back to the Rock started coming out, I found myself in several dreaded comment sections on Facebook posts, eager to see if people were excited, angry, blasé, or had never even heard of the original run. For the most part, everyone had much of the same to say about the new trailer: this show had meant a lot to them in their youth, they couldn’t wait to share it with their kids, that it looked so good, and a whole lot of frustration and confusion about why this show wasn’t premiering on Disney+.

But there were a handful of other comments that caught my eye; that I couldn’t move past.

I started coming across comments that made me raise my eyebrows. Comments like: “They’ll ruin this with all kinds of narratives, making it politically correct” and “please don’t ruin it with wokeness.” Comments claiming the show was just promoting “woke diversity” and that “all new reboots are usually woke garbage” and so much more.

Upon intaking these words, I could feel my brain breaking.

I want to remind the readers, who now have the pleasure of watching this show at their leisure, that I was reading all of these comments a week ago – before the show had even been made available online. These were comments being made about the trailer and/or the reviews that some web-sites were putting out of the show.

I think it’s pretty understandable why these comments left me baffled, many of which were penned by people who seemed to imply that they were familiar with the original series in some context, probably having grown up watching it.

When it comes to people complaining about Fraggle Rock being too politically correct, too woke, I cannot think of a clearer example of people looking for something to complain about when they have zero knowledge of the source material.

To quote the 1987 Down at Fraggle Rock documentary, Jim created Fraggle Rock to “use fantasy creatures as an allegory to deal with serious issues such as prejudice, spirituality, personal identity, the environment, and social conflict.” But more than that, as many of us know, Jim’s original conception of Fraggle Rock was that he wanted to make a show that’d bring about world peace. Of course this television show from the 80’s was never going to do that, I don’t think he was fooled into thinking it would, but through this program he still managed to create a world where the characters are willing to learn, grow, and change. Jim created a world where the best thing you could possibly be is kind, and damn if that isn’t something I wish we saw more often on our TV screens even to this day.

It feels like this next point goes without saying, but also is still important and needs to be addressed. We have to talk about how claiming a piece of pop culture these days is too “woke” is often a dog whistle. I came across more than a few comments asking why Doc had to be a woman, why Doc had to be Black, and why Doc had to be a Black woman. It’s incredibly clear what a lot of these “woke” complaints were actually about, and I for one do not appreciate misogynoir in my fandom, let alone anywhere else. People who saw this trailer and felt the need to complain because the producers cast a talented, charismatic actress for the role of Doc need to keep their sexist, racist viewpoints away from anything Henson-related. They do not belong here and we do not want them.

I feel in my bones that a lot of the people who were ranting against this trailer, even the ones claiming to be familiar with the original series, have never seen a second of Fraggle Rock. If they had, they’d know how Fraggle Rock has always been politically correct. That the show was all about inclusivity and equality. If people want to complain about Fraggles being “too woke”, well, I’m sorry, but you’re about 39 years too late on that one, my dude.

And I’m sure these people will never watch Fraggle Rock: Back to the Rock. Or, hey, maybe they will, and will then immediately turn off their televisions and decry what the PC Police have done to a franchise they clearly know nothing about.

I know writing a piece like this isn’t going to change anyone’s mind and will most likely only be consumed by folks who have my same stance. But it’s still important to me. After all these years of being a Henson fan, it’s still important to remind myself that, when I am feeling down and that the world is too callous, there is goodness in things like the Muppets and Sesame and Fraggles. That Jim Henson strove to make something beautiful with Fraggle Rock, and maybe it’s not for everyone, but it sure as hell is for me. It’s important to me that when people, even faceless strangers online, say that something is ruined because it dares to show an ounce of empathy or kindness, that I can “no” and know that I mean it.

At this point, I’ve had the great pleasure of watching most of Fraggle Rock: Back to the Rock. I’ll hold off on my takes for now (I’ll be reviewing an episode sometime in the oncoming weeks), but I just want to say: I am so grateful for this production. Jim would be proud to see his legacy continued like this, that the people behind this new show have put just as much love, thought, and compassion into what they’ve created. They didn’t make a show that’s full of references to Twitter and Joe Rogan and NFTs, nor did they make a show where the characters are mean to each other just for a laugh. They made a show about friendship and exploring and striving to be better. What a beautiful love letter to Jim Henson this show has become.

So, I guess what I’m getting at is if you watch the new Fraggle Rock and think to yourself “man, I hate this garbage, why does wokeness ruin everything?” Hey? Guess what? You were never a fan of the original show to begin with, and Jim Henson – who was an old progressive hippie that literally everyone loved – would be so incredibly disappointed in you.

Click here to wake up on the ToughPigs forum! 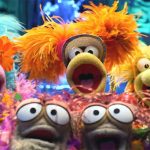 Confessions of a First-Run Fraggle Fanatic