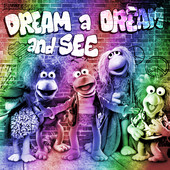 As we reported not long ago, a Fraggle Rock tribute album is now available for purchase on the iTunes Store. Part of the show’s 30th anniversary goings-on, it’s called Dream a Dream and See and it features 18 tracks of Fraggle Rock songs performed by various indie-type bands of today.

I know this is the most obvious possible point to make when reviewing an album of covers, but it really can’t be ignored in this case: With any tribute album, the big question is whether the cover versions of the songs should try to sound like the originals, or whether they should add their own spin. The question is especially interesting when you have an album of independent artists doing songs for an adult audience, and those songs were originally performed by puppets who live in a cave on a children’s show. Let’s take it track by track… 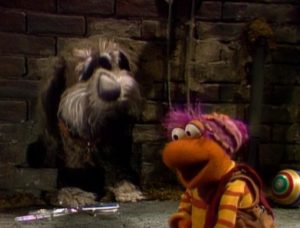 “Count on Me” by Kyle Andrews (written by Phil Balsam and Dennis Lee, originally sung by Gobo to Sprocket)

The album gets off to a good start with this one.  The arrangement here is sort of video game-y, which doesn’t sound much like something that would ever be on Fraggle Rock, but it retains the upbeat spirit of the original song.

“Ragtime Queen” by Jenny O (Balsam and Lee, originally sung by Mokey to her Mokey doll)

I don’t know what happened to the rest of Jenny O’s last name, but she does a pretty, simple version of Mokey’s ode to her burlap doppelganger.  Which brings me to another point: Most Fraggle Rock songs serve a very specific purpose in the episodes from which they originate. I wonder if there were any songs that were off-limits to the artists contributing to this album, because they wouldn’t make sense on their own. On the other hand, the casual impulse-buyer who finds this on iTunes would probably have no clue which of the Fraggles is dancing with a ragtime queen, or why, or what a “ragtime queen” is, so it was probably open season.

“Dream a Dream and See” by Fol Chen (Balsam and Lee, originally sung by the Fraggles going into Boober’s dream space)

Whoa, this is totally trippy.  The lyrics are practically unintelligible, but it certainly does have a dreamlike quality.  Actually, you know what listening to this reminds me of?  When you wake up after you’ve been anesthetized for surgery, and you feel like everything is moving slowly and your head is underwater.  For all I know, that’s what it feels like when the Fraggles transition into shared consciousness, so I guess this track is a success! 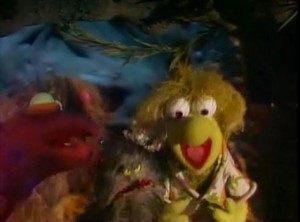 “Scare Them, Boo!” by Audacity (Balsam and Lee, originally sung by Philo, Gunge and Wembley)

Yeah, this one is good.  It kind of sounds like a garage band rock song from the 60s, and it suits the song well. It’s definitely the best track on this album by a band named after sound editing software.

“Loose Your Heart and It’s Found” by Sin Fang (Balsam and Lee, originally sung by Cantus and the Minstrels to Mokey)

“Loose Your Heart?” Can that be right? Surely the song is called “Lose Your Heart and It’s Found,” (as it’s listed on Muppet Wiki), right? Anyway, I actually don’t remember this song from the show, but Sin Fang’s dreamy arrangement works for it. Musically, it sounds like something you could hear at SeaWorld as Shamu majestically swims around the big whale pool

“Let Me Be Your Song” by Old Light (Balsam and Lee, originally sung by Cantus and the Minstrels, of course)

Hey, two Cantus songs in a row!  This recording makes me picture long-haired dudes raising up lighters at a concert.  I’m not sure that’s the image I want for a Cantus song, but at least it’s recognizable. I have to wonder if Phil Balsam and Dennis Lee, the original Fraggle songwriters, have heard this album, and what they think of it. I suppose they’re probably happy with the royalties. 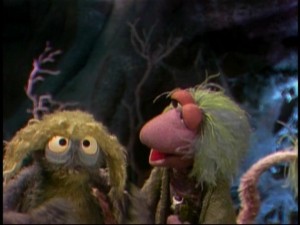 “If You Want My Heart” by A Magic Whistle (Balsam and Lee, originally sung by Mokey to Begoony)

Hmm… This song title doesn’t show up on Muppet Wiki.  I think this is the one listed there as “I’d Give My Soul,” the song Mokey sings to Begoony in the episode “The Incredible Shrinking Mokey.” So what’s the real title?  Anyway, A Magic Whistle does all the vocals for this song using the device that the internet tells me is called a talk box.  Which means that finally we have an answer to the question “What do you get when you cross Mokey Fraggle with early-80s funk band Zapp?”

Hey, this is the theme song! With an intro that reminds of The Who’s “Baba O’Riley.” Electronic instruments are prominent on several tracks of this album, including this one, which must have been intentional. I wonder if this was originally going to be promoted as, like, “The Electronic Fraggle Experience.” And were there plans for a Fraggle tribute album primarily featuring country artists, or jazz artists… or a Fraggle Rap album???

“Sunlight and Shadow” by Darker My Love (Balsam and Lee, originally sung by Mokey)

You know, there are a lot of Fraggle Rock songs that I know really well, but this album seems to include a lot of the ones that I’m just not that familiar with. I mean, I remember when Mokey was captured by the Cave Fraggles, but I couldn’t identify this as the song she sings from her cage until I looked it up. But what about the recording itself?  Well, I’ve already used the word “dreamy” in this review, but this one fits that description. There’s a little bit of a Byrds/”Mr. Tambourine Man” vibe to it, which I’m sure Mokey would appreciate, being the hippie Fraggle and all. 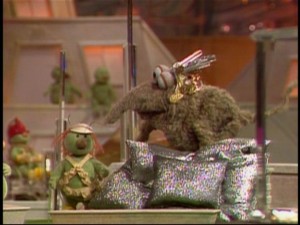 “I’m Gonna Be a Star” by Drag News (Balsam and Lee, originally sung by Gunge)

This one certainly picks the energy back up. The singer from Drag News can’t exactly… sing, so the whole thing is a little tough to listen to. But it’s only one minute and 36 seconds long!

Ooh, I like this one. It’s another one full of electronic sounds, but this one sounds like it was recorded in the early 1980s. For some reason it makes me envision a music video with Convincing John animated as Pac-Man.

The title would seem to indicate that this is the theme song again, but it’s really not… It uses samples of the actual theme song, but for the most part it consists of a guy exxxxplaining to a friend all about the Fraggles.  It wouldn’t be helpful at all to anyone not already familiar with the show, but at least the band seems enthusiastic about the subject.  Also, it pretty much sounds like it was all made up in one take, and if you like soft rhymes you’re going to love this song — dream/scene, lazy/baby, and work/absurd, and so on. 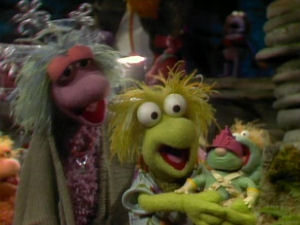 “Time to Live As One” by Low (Balsam and Lee, originally sung by Mokey to the Fraggles)

This might have the clearest vocals of any track on this entire album. It’s lovely, it’s simple, and it lets the message of the song speak for itself.

“If You Want My Heart” by Radiation City (Balsam and Lee, originally sung by Mokey to Begoony)

This is that Mokey song for Begoony again.  You know, there are 194 items in the “Fraggle Rock Songs” category on Muppet Wiki, and only 18 tracks on this album.  So why the duplicates?  And yet, this couldn’t possibly be any more different than the earlier version, or even Mokey’s version.  I haven’t heard of Radiation City before, but if all their songs are like this, I’m going to seek out more of their stuff for sure. They turn the song into a late-1950s/early-1960s wall-of-sound pop number, and the singer’s voice brings out the romanticism in the song.

“Turn Your Buttons Down” by Schlag Schlag (Balsam and Lee, originally sung by the Poobahs)

Here’s another one that does its own thing while successfully capturing the feel of the original Fraggle performance, right down to including the opening remarks by the Poobahs.  And somehow, a band called “Schlag Schlag” seems like the right choice for covering the Poobahs’ song. Also, it makes me want to go watch that episode right now. 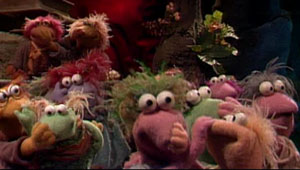 “Hum Dance Clap Sing” by Spock & Nez (Balsam and Tim Wynne-Jones, originally sung by the Eminent and Venerable Council of Sages, I think)

I’m pretty sure this is the song listed on Muppet Wiki as “The Hum Song (Hold Each Other’s Noses)” from “Red-Handed and the Invisible Thief,” but once again I’m very curious about the title discrepancy. This is one of those songs I don’t remember from the show, but it sounds pretty funky when performed by Spock & Nez.

This is almost unrecognizable as the little ditty Junior sings to himself about what he’s going to do if he ever catches a Fraggle. Hey, here’s a question: If you were covering a Junior Gorg song for a tribute album, would you do the “Fwaggle” speech impediment thing? The singer for Urxed doesn’t, and it just feels wrong.

“Do It on My Own” by Vivian Girls (Balsam and Lee, originally sung by Red)

This is a fun, up-tempo way to close the album, even if the song is one of those that makes me wonder why Fraggles sing about things they should never have heard of, like popcorn and pop machines.  The Vivian Girls singer even sounds somewhat like Red Fraggle — I’m definitely not going to look for a picture of her, so I can go on assuming she has poofy, bright yellow pigtails.

The first time I listened to this thing, I was sort of expecting to trash it in my review, but the more I’ve listened to it, the more some of the songs have grown on me. But there are still several of them that I’ll definitely be skipping every time I listen to it.  By way of answering the “How faithful should an artist be to the original” question, I noticed that the tracks I liked the most were the ones where the artist put a fun twist on the song without burying it with layers of noise or distorted vocals. In conclusion, I suppose I’d just like to say that I can’t believe this album has so many Mokey songs.

Do you agree with this review?  Do you disagree?  Do you know what the deal is with “If You Want My Heart”/”I’d Give My Soul?”  Click here to catch another Fwaggle and kick ‘im in the Tough Pigs forum!