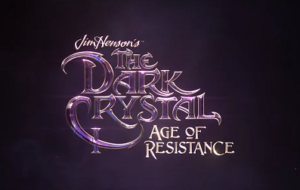 Like most Muppet fans, I root for the Henson family to make good and successful projects. We all love the Jim Henson Company, because it has Jim Henson’s name in the title. But we’ve been burned in the past, by projects that were announced and never made (like the Fraggle Rock movie), half-formed ideas that never went anywhere (like The Skrumps), and projects that were made but shouldn’t have been (like The Happytime Murders).

So I’ll be honest. I was nervous about watching The Dark Crystal: Age of Resistance. Even if we put aside the Henson Company track record, I couldn’t get excited about The Dark Crystal. I admire the movie for its visual creativity, but I always thought it was boring. I’m also generally not a fan of Netflix’s approach to dramatic TV, with each season acting like a 10-hour movie instead of ten distinct episodes. So I expected to dislike the series. Before starting the show, I mentioned to my colleague Ryan Roe that I didn’t think it would be for me. 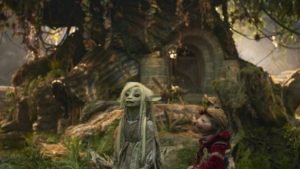 I’ve now seen the first five episodes, and it very much is for me. In fact, I’d say that the target audience for this show is “people who think the movie is gorgeous but dull.” The TV series keeps the same lovely visual style, but adds compelling characters, a better-developed world, and a more engaging story.

That story involves a grave threat to the world of Thra, which will come as no surprise to people who’ve seen the movie. As the series opens, the Gelflings believe that the Skeksis are their wise and benevolent rulers. We watch as that control starts to unravel, propelled by the actions of three brave young Gelflings. 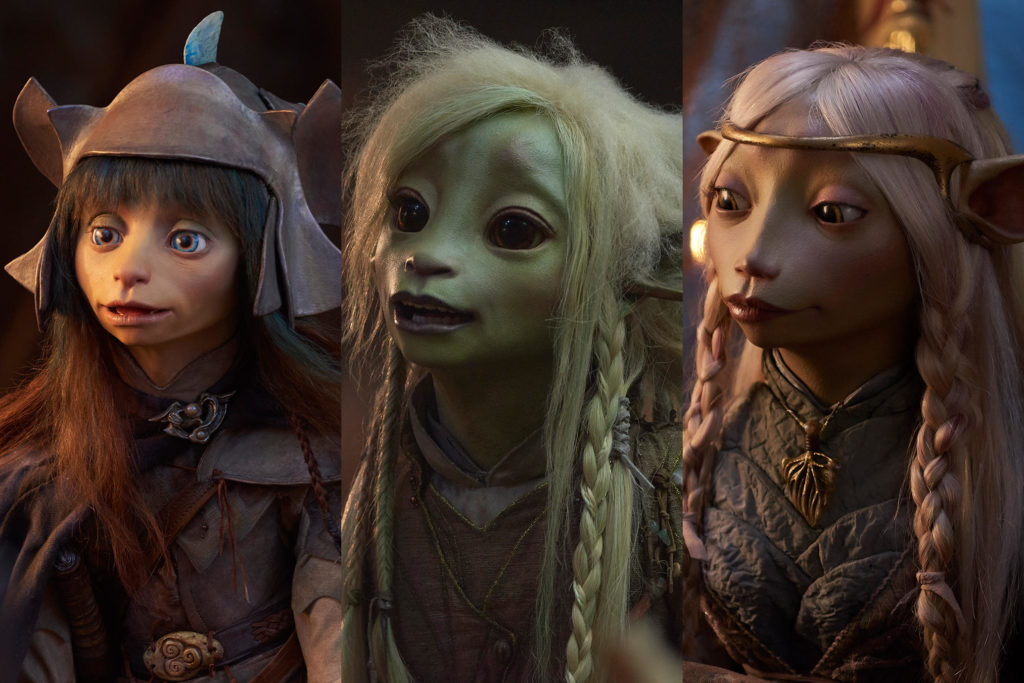 Each of our three main Gelfling heroes – Crystal guard Rian, underground-dweller Deet, and bookish princess Brea– starts out with their own quest, and the episodes bop back and forth between the three threads, slowly intertwining them. This really helps the pacing of the series, which was one of my biggest problems with the movie. It rarely feels like time is wasted, because every scene is in service of story or character.

The show has a large cast beyond the three heroes, and the expanded running time allows us to get to know them in depth. Some of these are familiar from the movie, such as Aughra and the Chamberlain Skeksis. Others are brand-new, like the Gelfling All-Maudra (which is the Queen, except a made-up fantasy word), the courageous Podling Hup, and the intense Hunter Skeksis. 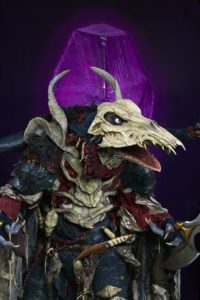 Age of Resistance is set in a dark world, but the show finds plenty of time for humor. The loveable Hup is a comedic standout, as is a fortune teller voiced by Eddie Izzard. These touches balance out the more serious events, especially as the action turns bleak (and believe me, it does). Some of these characters are explored better than others, but they all feel like flesh-and-blood creatures, and help the world feel lived-in and real.

That feeling is, of course, aided by the puppetry. The Henson Company built their reputation on pushing the boundaries of the artform, and they continue to do so here. I expected the puppetry to be a highlight, but I was unprepared for the sheer number of jaw-dropping effects. I’ll leave most of these as surprises, but here’s an example: One episode features a sequence in which Aughra performs a ceremonial dance. Aughra is performed here by Kevin Clash, and he really gets to show off. Aughra is a bulky puppet, but her movements are smooth and fluid. That’s just one example in a series full of beautiful moments. 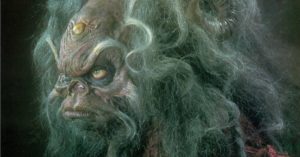 The puppeteers are ably supported by the work of the voice cast, all of whom deliver natural-sounding performances. Again, one of my problems with the original movie is that the dialogue often sounds stiff. That isn’t a problem here, as all of the voice actors invest their characters with the proper emotion. Even when they’re tasked with delivering exposition, they do it with warmth and realism. I don’t even want to pick out favorites, because it’s a great cast from top to bottom.

The Dark Crystal: Age of Resistance is more than a worthy successor to The Dark Crystal. It’s a huge improvement on the foundation laid by the film. It’s not perfect – there are certainly some storytelling choices I didn’t care for – but it is excellent. It’s an exciting, lovely expansion of the world Jim Henson created, which might be the best possible way to honor his legacy. 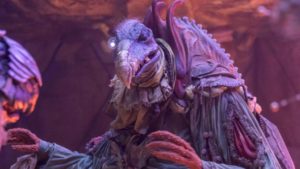 The Dark Crystal: Age of Resistance drops on Netflix tomorrow (Friday, August 30.)  Tough Pigs will be reviewing each episode in detail, so check back for that!

Click here to watch a Fizzgig roll around on its back on the Tough Pigs Forum.