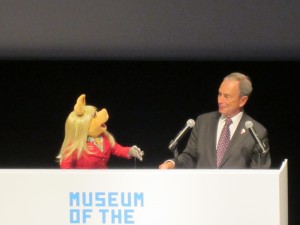 Big news today from The Museum of the Moving Image in Queens, New York.  After the successful, extended run of Jim Henson’s Fantastic World a while back, the Jim Henson Legacy has donated almost 400 artifacts to MOMI for a permanent gallery devoted to Jim Henson.  The city of New York will be contributing $2.75 million for construction of the gallery, which is expected to open to the public in winter 2014-2015, and will include puppets, costumes, props, film clips, and all kinds of stuff.

The news was announced this morning at a press event at the museum.  New York City mayor Michael Bloomberg was there, but nobody cared about that guy, because Miss Piggy, Gobo Fraggle, and Oscar the Grouch were also present.  (Though not onstage at the same time, ’cause lawyers.) Your intrepid Tough Pigs reporters were there too, and we’ll have video soon, but for now, here’s a picture of Gobo sitting on a box hearing about all the cool stuff that’s coming to the museum: 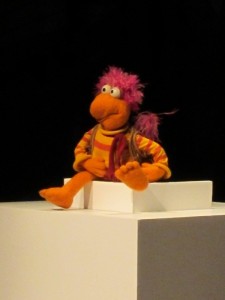 And here’s Oscar and Mayor Bloomberg (Oscar’s the one on the left): 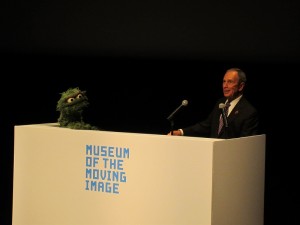 Click here because to argue that the La Choy Dragon BELONGS IN A MUSEUM on the Tough Pigs forum!