Last week, I got an e-mail (as I occasionally do) from a Swedish gentleman named Andreas Qassim with a swell illustration of his country’s mascot: The Swedish Chef. After asking him for moremoremore, Qassim sent me another batch of photos which, unbeknownst to him, had already been passed around and ogled over on the ToughPigs forum. As it turned out, we were already Andreas Qassim fans before knowing who Andreas Qassim was.

Below you’ll find a batch of Qassim’s illustrations along with an explanation on each one in his own words. And as always, give the images a click (not a “lick”, as I originally typo’ed) to see them in their original sizes!

Quassim: Title image from my showreel (2 min 44s, http://vimeo.com/14461728). The Muppets have a tendency to show up in my artwork. I never invite them, but I always appreciate their presence of course. With your 6th Muppet sense, I’m sure you can spot the Muppet. 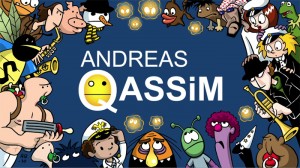 Qassim: “Celebrating the Duck” was my contribution for a touring Norwegian exhibition celebrating Donald’s 75th birthday. The bear (Bamse) is Sweden’s most famous cartoon character (I draw for the comic). The others you know. 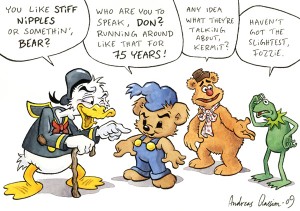 Qassim: From a student comedy play about the American civil war, for which I illustrated the program. In the play Booth shoots a chef (not the Swedish one) instead of Lincoln.

Qassim: Supposedly the banner of a Nordic muppet fan art blog. It’s yet to happen…

And here’s a few more great pieces, no explanation necessary! 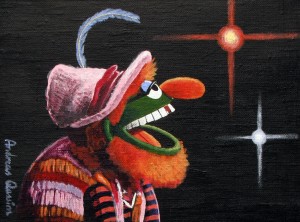 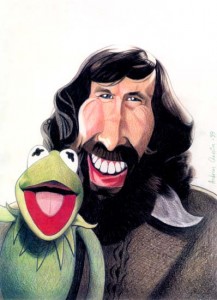 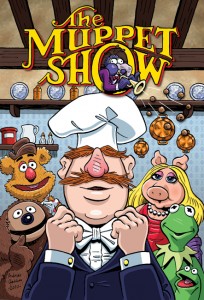 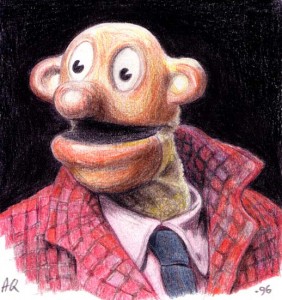 Last but not least, Andreas Qassim is responsible for this amazing video, which made the rounds around the interwebs few months ago, and it’s still one of the most impressive Muppet fan videos I’ve ever seen.

Many thanks to Andreas Qassim for sharing his work with us! For more from Qassim, visit his website!

Click here to plant your Norwegian flag on the ToughPigs forum!