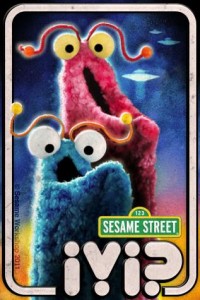 We should’ve known. The human race’s first contact with alien life doesn’t come from an historic meeting on the White House lawn, it doesn’t happen in the middle of a crop circle in Nebraska, and it isn’t in the bedroom of a little boy in a Spielberg film. It’s on your iPhone, and it has something to say.

Last month, we told y’all about iYip, the new Sesame Street app starring those wacky octopus aliens. And it has everything you could possibly want from an iPhone game with the Martians: “Yip yip yip”, “Uh huh”, and “Book”. I mean, aside from their Cthulhu-esque appearances, all anyone cares about is hearing them stutter out their catch phrases.

And that’s pretty much what you’ll get with the app. Sounds. Lots and lots of sounds. You can get a total of 144 different Yip Yip quotes, which I’m guessing is about 130 more quotes than they’ve had throughout their entire history with Sesame Street.

That brings us to the first downside of the app. Of the 144 sounds, only 78 come with the $0.99 app. The rest have to be purchases with separate expansion packs, of which there are three at another $0.99 a pop. Now, I don’t know about you, but I like my $0.99, and I’m usually very cautious in deciding where to spend it. After shelling out an almost-buck on the app, I was a little surprised that it was already asking me to spend more. If there was some sort of disclaimer explaining that the proceeds of the app will be funneled back into the Sesame Workshop non-profit, maybe I’d feel a little better about spending the cents. But without that, it ends up feeling like corporate greed, attempting to take over the world one iPhone user at a time. 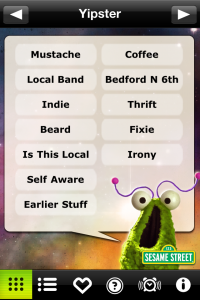 The sounds are all divvied up into categories: Yip (expressions of agreement), Nope (expressions of disagreement), Alarm (sounds of alertness), Phone (like the alarm, but more ringy), Yipster (will anyone outside of Williamsburg, Brooklyn get these?), Cool Guy (that dude at that party you hate, yet have never met), Politeness (or, as polite as one can be when talking through an iPhone), Office (the place, not the show), and L0L Speak (so many unnecessary acronyms!). But really, there are two main categories: Sounds You Recognize and Sounds That Are Hilarious. You can listen to the Martians say, “Yip yip yip yip, uh huh, uh huh” immediately followed by, “Mazel Tov!” And in that randomness is the true pleasure of playing with this app.

Speaking of random quotes, that’s probably the most compelling reason to buy this app. Where else can you hear the Yip Yips talk about their “fixie” bikes or about how much they like those “sick beats” or if you could please “pass the salt”. You’ll probably never hear these guys say anything like that on Sesame Street, so why not get a whiff of it here? 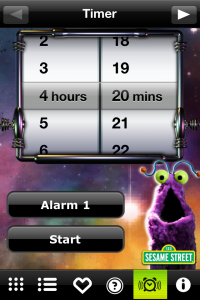 But let’s face it, in the end an app that only plays sounds gets a little stale. How often will you really pull it out to hear another “Yip yip yip”? There’s at least two more reasons to give it some extra life: the alarm and “The Martians Decide”. The alarm is self-explanatory, but “The Martians Decide” is a clever, low-key toy that makes good use out of the sounds. It’s essentially a Magic 8 Ball, which will answer your questions with a “yes” or “no”, but in the nasal tone and broken English of a Martian. I can imagine a lot of kids getting a kick out of that feature, as well as some very indecisive adults.

The very, very best part about the app is the video below, which features Marty Robinson and Matt Vogel performing the Martians in studio. Heck, I’d be happy about seeing this video no matter what. The app is just a bonus.

Man, Marty and Matt really do a bang-up job, don’t they? If we can’t have Jim and Jerry performing the Martians, I’m glad it’s these two, who really get the characters (however complex you may think they are) while adding a bit of modern flair.

So, what’s the final word? I admit, I had a blast messing around with this app. Unlike the previous Sesame Street apps, this one isn’t aimed strictly at kids, but toward Sesame fans of all ages. It’s retro and it’s funny and it’s only a buck. But here’s the downside: I bought this app the day it debuted, and aside from using it for this article, I’ve probably opened it twice. Once to play with it on Day #1, once to show it off to some friends. Was that worth a dollar? Probably not, but maybe if I show it off a few more times before my iPhone poops out, I’ll feel like I got my $0.99 worth.

iYip gets a “Yip Yip Yip” if you’re interested in some high-tech Sesame nostalgia, but a “Nnnnnope” if you’re seriously questioning the value of a dollar. Uh huh, uh huh. 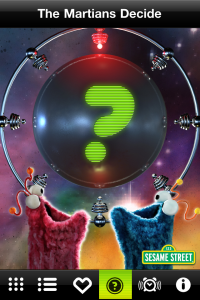