The Muppets to Celebrate Troops with Needless Violence 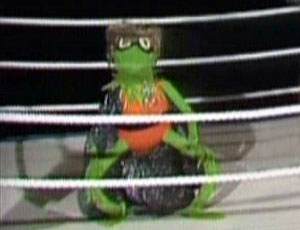 It’s been just over a year since the Muppets appeared on WWE Raw, and apparently wrestling fans have been clamoring for more of the lady pig and unfunny bear.  The Muppets are set to appear with that rascally WWE gang once again this holiday season for WWE Tribute to the Troops.

Other performers will include Kid Rock (who is neither a kid nor a rock) and Flo Rida (the hip hop artist, not the state).

Many thanks to the Muppet Mindset for alerting us to the news!  Click here to smell what the rock is cooking on the ToughPigs forum!